Star Chef Anton Mosimann OBE, DL returns to Malaysia this September as “Guest Chef” at two award-winning resorts – The Club Saujana Resort from 17 to 22 September and The Datai Langkawi from 24 to 27 September 2012.

Guests will soon have the privilege of indulging in the tantalising temptations of fine culinary arts, as presented by Anton Mosimann! 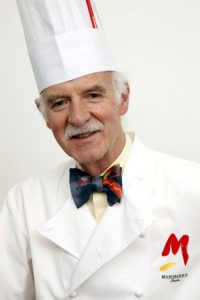 Anton Mosimann, a Swiss-born chef rose to fame in the UK while cooking at The Dorchester where he witnessed the restaurant being awarded Two Michelin Stars. He is widely regarded as the founder of Cuisine Naturelle, a style of cooking he invented which highlights the flavours of individual ingredients. Mosimann followed the halcyon Dorchester years by opening his own Private Dining Club, Mosimann’s, in London’s Belgravia.

In 2011 he was chosen to display his culinary expertise for 300 guests at the grand reception in honour of Prince William, Duke of Cambridge and Catherine Middleton’s wedding, at Buckingham Palace. He has catered for most of Europe’s Heads of State as well as the British Royal Family, four British Prime Ministers and four US Presidents. An opportunity presents itself for discerning Malaysian gourmands who are quick to seize it to enjoy a taste of Chef Anton Mosimann’s exemplary cuisines.

For Chef Mosimann’s return visit, he will showcase his exclusive lunch and dinner menus at the two resorts, with optional wine pairings available with each sublime course. Guests can expect such specialities from the award-winning Chef as Chicken Liver Parfait with Pistachio Brioche, Marinated Scottish Salmon with Fresh Crabmeat, Coriander and Lemon Sauce, Roasted Saddle of Lamb, Herb Crust English Cheese, and Mille-feuille of Red Berries with Raspberry Sauce to name a few. Lunch menus are RM350++ per person and Dinner menus are RM650++ per person. Enhance your experience with luxurious accommodations at an exclusive rate. For reservations at The Club Saujana Resort call +60 3 7843 1234 or email [email protected].

If you are in Malaysia during September and can get to either the Club at Saujana on Kuala Lumpur of the Datai in Langkawi  then you should’t miss the opportunity to sample the incredible cuisine from celebrated Chef Anton Mosimann, a true legend in the culinary world.