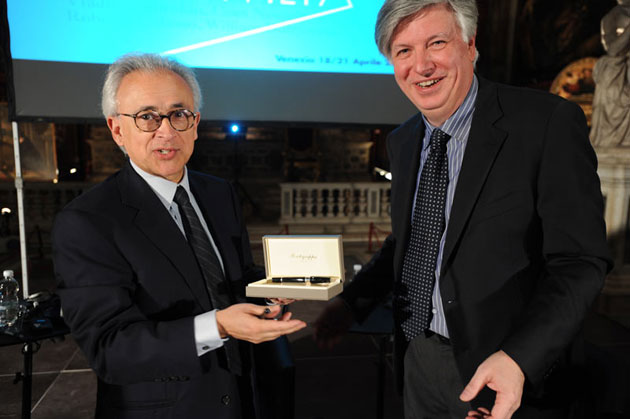 Montegrappa, the premier Italian manufacturer of writing instruments, has always supported literature, handwriting, art and culture during its 100 years of history.

Since 2010, Montegrappa is an official partner of Incroci di Civiltà – Crossings Civilizations.

The fifth edition of Incroci di Civiltà – Crossings Civilizations 2012, promoted by the City of Venice, Department of Cultural Activities, and the University Ca’ Foscari of Venice, was held from April 18th through 21st, 2012 and re-proposed the winning formula of bringing the literary world to Venice and Venice into the world.  24 writers from 17 countries came to Venice from all over the world, sharing their cultures, presenting their ideas and opinions, and dealing with the most diverse themes. This year’s edition offered new and important features that enriched the program. 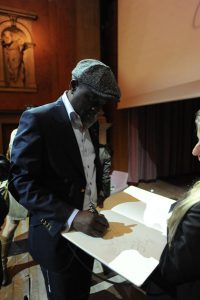 The opening meeting took place in the Scuola Grande di San Rocco on Wednesday, April 18th. After awarding the Bauer-Ca’ Foscari prizes, followed the meeting with the celebrated Portuguese neuroscientist and writer, Antonio Damasio, whose most recent book, The Self comes to Mind, has recently been translated by the publishing house Adelphi (Il sé viene alla mente). Guest to this year’s edition of Incroci di Civiltà included Italian essayst, Roberto Calasso, who conversed with Scottish scholar in Oriental studies, William Darlymple; Swedish novelists, Steve Sem-Sandberg, whose The Emperor of Lies has just been published in Italian by Marsilio (with the title Gli spodestati), and Per Olov Enquist; the great Dutch writer, Cees Nooteboom; Spanish crime-writer Alicia Giménez-Bartlett, who conversed with Andrea Molesini. This year’s writer in residence, guest of the ‘Musei Civici’ Foundation, was Vladimir Sorokin, from Russia. He will take inspiration from his stay in Venice to create an original literary text.

Three women writers from three Arab countries gave an important and awaited talk at the Ateneo Veneto on Thursday, April 19th. The Egyptian blogger Ghada Abdel Aal conversed with Malika Mokkedem, a medical doctor and writer from Algeria, and Alawiya Sobh, a Lebanese author of several acclaimed novels and editor of Snob, the best-known women’s magazine in the Arab world. Particularly important was the meeting with Wim Emmerik and Giselle Meyer, two Dutch poets of the sign language. On Friday, April 20th, they performed at the Auditorium Santa Margherita, where they allowed the Venetian audience to know the unique and fascinating expressiveness of their poetic language. As in the previous editions, Incroci di Civiltà 2012 too included a foray into the domain of cinema, thanks to the presence of the French director Robert Guédiguian at the Cinema Giorgione, on Thursday, April 19th.

Each author was presented with an exclusive Montegrappa writing instrument that will hopefully be used to write new chapters of modern literature.