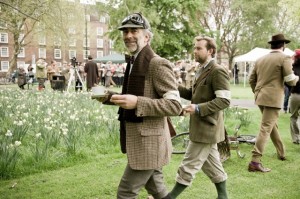 The London Tweed Run is defined by it’s organisers as “a metropolitan bicycle ride with a bit of style”. Brooksfield participated in this unusual competition (now in its fourth year) by dressing the challengers who will be riding “Ribelle”, the bicycle made by Italia Veloce. This velocipede was created by the artisans of the Italia Veloce company in Parma, designers and manufacturers of a bicycle with a thoroughly Italian feel, evoking Italian country bikes of the 1950’s and ‘60’s, alluding to the Brooksfield style and way of life.

What is the “London Tweed Run”?

The 2012 London Tweed Run is an “Old Britain” style cycling race – the only competition where style counts more than performance. Over 600 metropolitan cyclists wearing jackets, trousers, hats and accessories, in perfect 1930’s and ’40’s English style, will colour the streets of London with a vintage atmosphere.  As the world’s “coolest” amateur bicycling event, each edition is a race, rally and event. With ever increasing numbers, each year in London the Run gathers enthusiasts of bicycles and vintage style from around the world. According to British custom, both male and female participants must be dressed as elegantly as possible in tweed, while the selected bicycles (the other protagonists of the event!) are a tribute to the classic-vintage style, and the most distinctive bicycle receives a special prize.

The three hours jaunt through London started from the very green and very British Princess Gardens in South Kensington, Exhibition Road, this year – the preferred gathering spot for the City’s gentlemen is right in front of Hyde Park, the symbol of the Sunday bicycle ride. A jazz orchestra played tunes from seventy years ago in the garden – an emotional jump back in time, to a by-gone and glorious era. The most elegant male and female riders were awarded a prize, as was the best mustache. The chaps and dames just loved it! 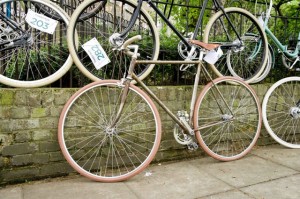 After the group picture in front of Royal Albert Hall and several miles of touring through the City, the pack of Tweed-runners pedaled by Westminster Palace and Big Ben to stretch their legs at the ‘Tea Stop’ in front of the Imperial War Museum, where cupcakes and tea resuscitated the riders after the morning’s eight mile exertion. Later, a chorus of bells sounded the end to the ride – 13 miles are no joke! Outside ‘The Blacksmith & The Toffeemaker’ pub, the participants toast to whiskey sour among the pipe smoke of the exhausted but happy gentlemen.

Italia Veloce and Brooksfield, with their style of English elegance in the Italian tailoring tradition, join the spirit of this competition by adding a touch of irony to its British soul.