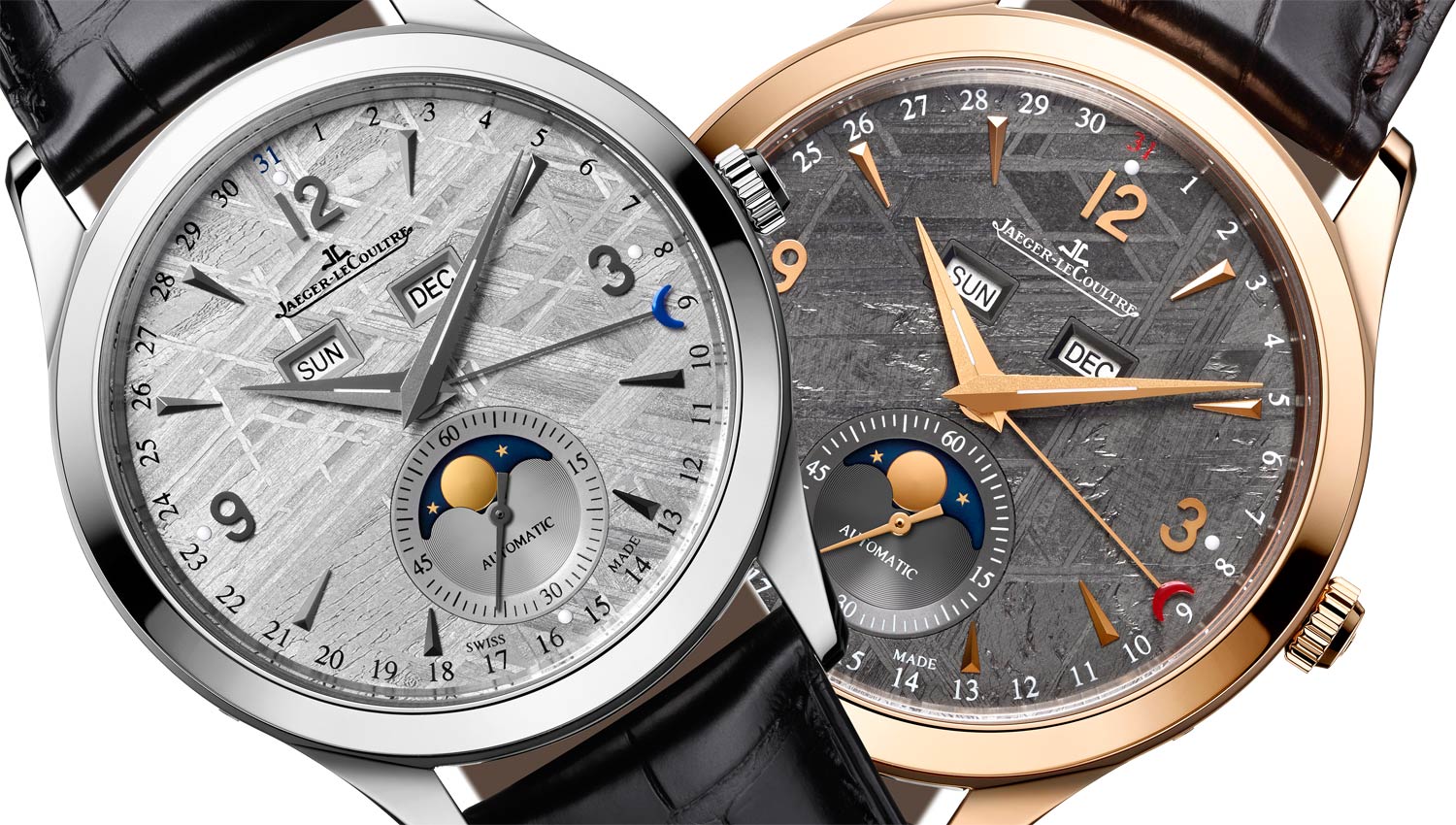 Ong Chin Huat has a preview of the new Jaeger-LeCoultre Astral Collection from this much-coveted watch brand and is mesmerised by the Master Calendar, a timepiece that literally comes from space.

Captivating is the only word that can really describe the night sky over the Vallée de Joux, a secret hollow nestling in the Swiss Canton of Jura that gave birth to the Maison Jaeger-LeCoultre. Very few lights disturb the beauty of the night sky, ensuring a serene and tranquil experience for those who gaze into the heavens. The sky holds the secret of the origins of time, while the Sun, Moon and stars have tantalised Mankind with clues to it for millennia.

So it’s rather fitting that, in 2015, a world-class manufacturer in the Vallée de Joux is sharing its fascination for the movements of the heavenly bodies and expressing it in the exquisite form of an exclusive and highly-desirable watch. 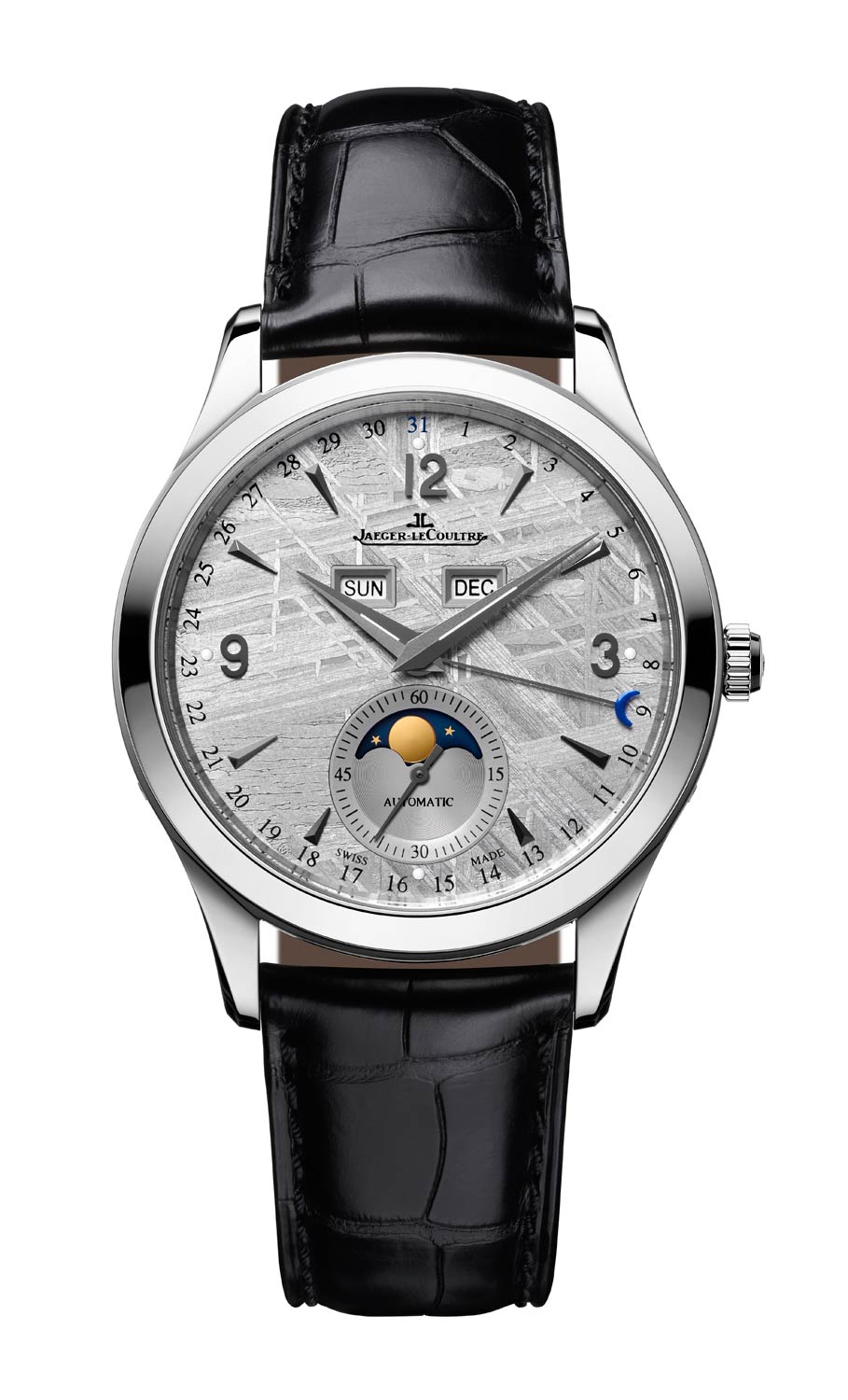 An Impressive Panorama
The world’s finest watchmakers refer to their most extraordinary creations as complications – functions of watches that do more than merely tell the time in an elegant manner!

And because they speak to the mind and the heart, calendar complications fire the imagination more than most.  Lunar calendar, sidereal zodiac calendar… the very terms used to describe them are a voyage into a universe that stretches far beyond our grasp and yet governs us.

Through its new creations, Jaeger-LeCoultre illustrates the phenomena observed by ancient civilisations and which still punctuate our daily lives in the 21st Century. The calendar year represents a complete turn of the Earth around the Sun. Moon phases give rise to the week and the month. The 12 hours represent the 12 decans (groups of stars) visible during the night of the Spring Solstice. Minutes and seconds were adopted to enable us to make complex astronomical calculations. By incorporating them into a watch aimed at connoisseurs of fine timepieces, Jaeger-LeCoultre wanted the complete calendar and the Moon phase to reflect the place they rightly occupy in our daily lives.

Fragments of the Sky
To embody the mesmeric beauty of the sky, the Moon and the stars, Jaeger-LeCoultre chose materials directly related to it, such as meteorite stone and lapis lazuli. Meteorites, the shooting stars that cross the sky leaving a luminous trail, have been used as a source material and crafted by Jaeger-LeCoultre’s artisans with the passion they’re famed for to convey the beauty that has captivated man down the ages.

Lapis lazuli was the favourite stone of ancient kings, who associated its colour with the sky chart. Its deep pigmentation is indeed rivalled only by the infinite depths of the heavenly canopy. These rare and mysterious materials are an integral part of these out-of-this-world watches.

Invention according to Jaeger-LeCoultre
Since it was founded in 1833, Jaeger-LeCoultre has brought the world’s watch aficionados countless landmark innovations, from the keyless lever winding system to the silent regulators that enhance the quality of sound emitted by repeater watches, and from the barely one-gram Jaeger-LeCoultre Calibre 101 to the iconic Reverso, along with groundbreaking concepts such as the Dual-Wing. Calendar functions have long been part of the watchmaking culture of the Grande Maison, admirably complementing other complications such as the Tourbillon or the Minute Repeater. This year, they are in the spotlight themselves, and rightly so. Jaeger-LeCoultre is putting the universe on the wearer’s wrist. And each of its new creations is designed to make the heart of devotees of fine objects beat a little faster. So they can look forward to discovering models such as the Duomètre Sphérotourbillon Moon with its infinitely accurate Moon-phase display. 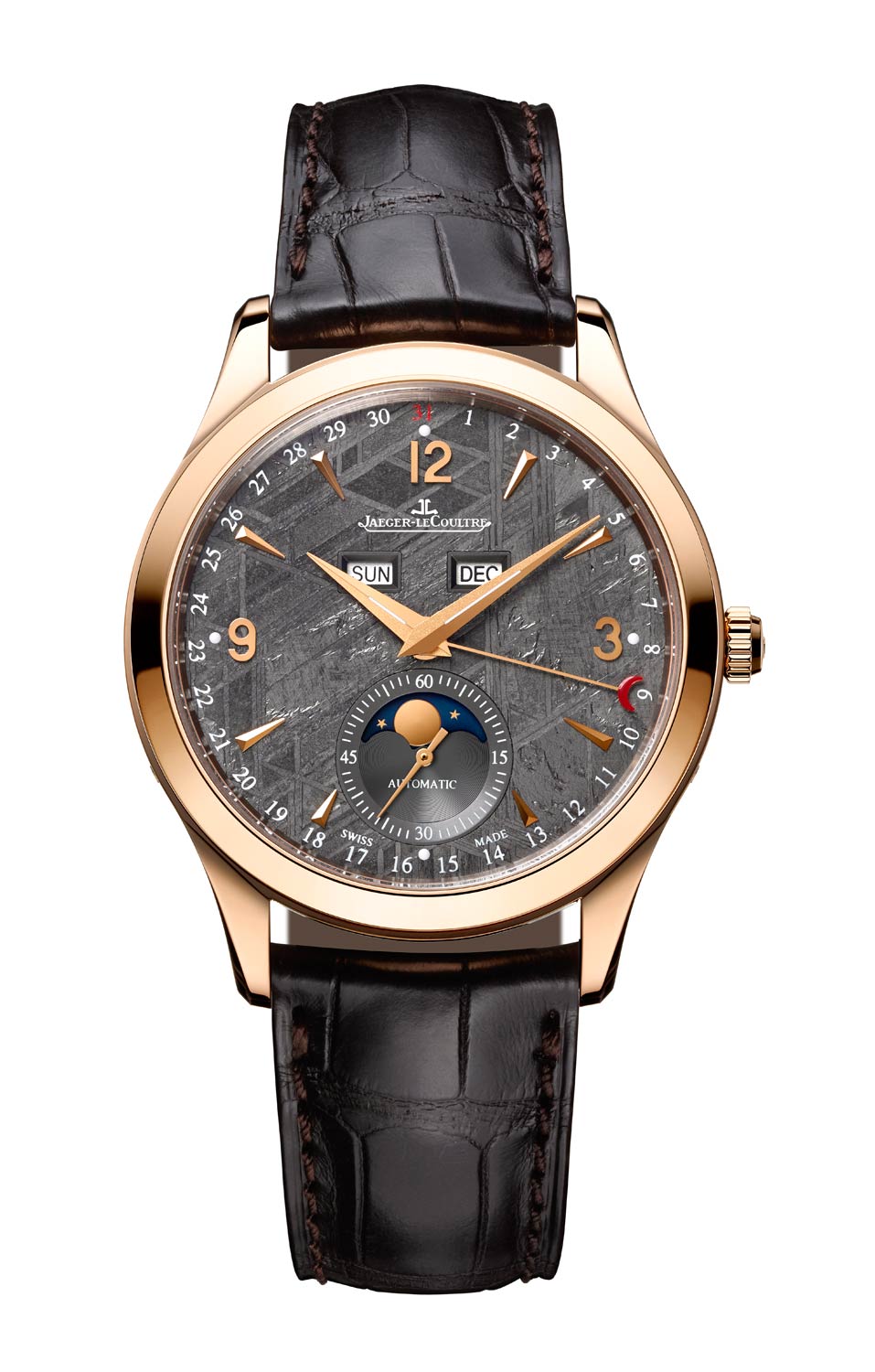 Composed of a single block of meteorite discovered and officially registered in Sweden, it comes from the asteroid belt between Mars and Jupiter.

However, its iron content makes the material difficult to work with. To get an aesthetically perfect dial, the meteorite is cut into several thin plates in a painstaking process until it meets the ultra-high standards of Jaeger-LeCoultre.  Still in its rough state, the meteorite undergoes several more processes before the structure of the stone is revealed in a unique pattern that expresses the beauty stored up for several million years.

The Master Calendar model displays the perpetual calendar by means of a long hand tipped with a Moon crescent sweeping around a scale around the dial rim graduated from 1 to 31. It also indicates the day of the week and the month in twin apertures at 12 O’Clock.

Finally, the complete calendar indicates the various Moon phases – new Moon, first quarter, full Moon and last quarter – in the traditional form of this heavenly body emerging from between two clouds and rising against a star-studded sky. The dial makes all this easy to see at a glance, with hours and minutes shown by dauphine hands and small seconds at 6 O’Clock.

So much effort goes into striking the right balance between watchmaking expertise, aesthetics, and optimal comfort.  With a 39mm diameter, the 10.6 mm-thick case is designed to adapt to the curve of any wrist. The sapphire crystal case-back of The Master Calendar reveals the intricate workings of Jaeger-LeCoultre Calibre 866 and its delicate finishes testify to the infinite patience of its creators.

If you love someone enough to want to give them the Earth, the Moon and the stars, here’s your chance to just that, in the elegant, exclusive form of the Master Calendar from Jaeger-LeCoultre.