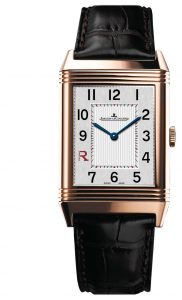 A symbol of elegance in an all-Italian watch

Jaeger leCoultre pays tribute to these important anniversaries with an exclusive limited edition for the Italian market.

The distinctive feature of the Jaeger LeCoultre Grande Reverso Ultra Thin special edition is its dial.

At 8 o’clock, the numeral is replaced with the letter R (and the word REVERSO forming the stem of the letter itself) in red. The letter R was in fact used in the Roman alphabet to indicate (in rare usage) the number octoginta, 80. The dial is also rendered unique thanks to elements in red, small details that recall the exclusive limited editions created for the Italian market (Master Ultra Thin Italico and Reverso 976 Italico). 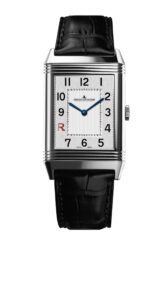 After 80 years spent in celebration of classicism, the new Grande Reverso Ultra Thin wishes to be revolutionary, aiming for extreme simplicity. The extremely fine thickness of the Calibre Jaeger LeCoultre 822 (just 2.94 millimetres) has allowed the thinnest ever Reverso to be created.

The case is larger and truly stands out on the wrist, but the extreme thinness of the timepiece and its delicately moulded form mean that it is light and comfortable to wear, The clean dial features vertical guilloché decoration, highly sober Arabic numerals, and fine blued hands: all the aesthetic codes of the Reverso are showcased here in this new ultra-thin version.

This model expresses the very essence of the Reverso’s personality, combining tradition with nobility, style and elegance.