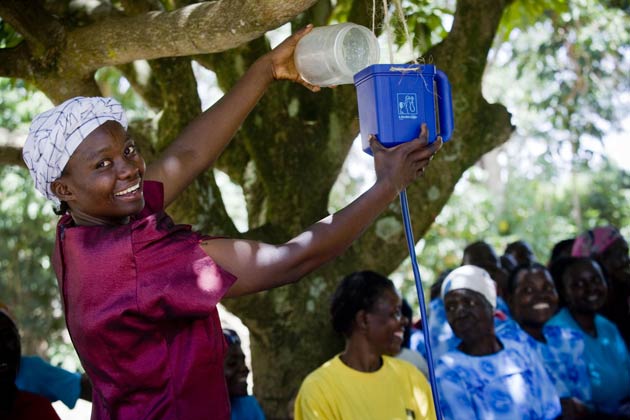 Over the last five years, working with ClimateCare, Jaguar Land Rover has invested in 50 carbon reduction projects in 17 different countries. Some of the first projects they supported, distributed more than 180,000 new, fuel-efficient stoves in Uganda, Ghana and Cambodia – dramatically reducing emissions and improving indoor air quality. This had a direct impact upon the health of approximately 1m people in these countries.

According to the World Health Organisation, 1.2 billion people live in areas where water is scarce and they are forced to rely on unsafe sources of drinking water. The LifeStraw project will provide thousands of people in Kenya with access to safer drinking water through a simple purification unit.

Mike Wright, Jaguar Land Rover Executive Director; “We take our responsibilities for meeting our environmental innovation targets very seriously; including reducing tailpipe emissions and improving the life cycle impact of our business. We are working positively towards a lower carbon future.”

“Since 2007, we have been investing in carbon reduction projects across the world and we are pleased to announce support for our 50th carbon dioxide offset project: ‘LifeStraw’, a simple water purification unit which helps to bring safe drinking water to Kenya.”

Wind power projects currently constitute 30 per cent of JLR’s project portfolio and are responsible for creating 1.3m tonnes of emissions reductions. JLR’s support of these projects is helping to provide a vital alternative to fossil fuels, while boosting investor confidence in renewable energy.

Projects have been supported in four continents, from those generating renewable energy through technologies including waste products, biomass, wind energy and hydro power to those encouraging low carbon development and energy efficiency. In all, JLR support has directly reduced emissions by more than 5 million tonnes.