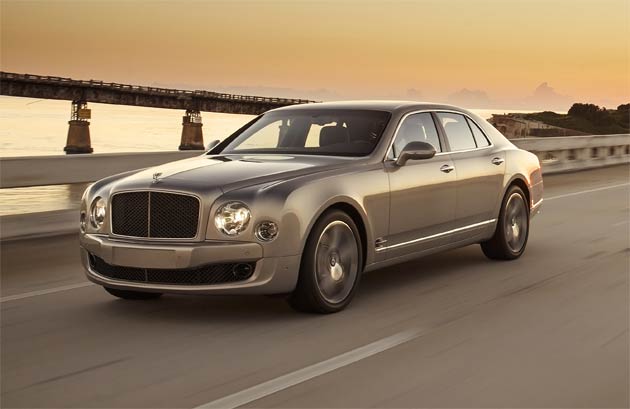 Bentley was founded in 1912 by two brothers, and once the makers of aircraft engines, they put their talent into the production of exquisite luxury cars from 1919. I had the privilege of driving one of Bentley’s finest models in the form of the Bentley Mulsanne.

It is the flagship of the company, a future modern British classic built in Crewe, England, and named after the Mulsanne straight of the famous Le Mans circuit.

As I passed through the doors of the Dubai showroom escorted by the salesman, there sat the ‘Titanic’, painted in champagne silver and standing proud. Its shirt tailored and pressed with the finest of silk ties and a suit that showed power and presence. The large headlamps sharing elements of old, a grille that dominates, and the all-important flying B, proudly adorns the nose of the car. An obvious line flows from the front wings to the rear lights, giving it a near masculine tone and shape and highlighting elements of the 1950’s Bentley S.

Keyless entry allows immediate access into the car and as I lowered myself into the soft leather seat, I could feel the craftsmanship, but sense it in a way that takes you back in time. I could imagine while looking at the stitched diamond pattern leather, an older guy sat with his half sized glasses on, leather apron and thimble applying meticulous effort to ensure a perfect finish. Fine polished wood veneer lines the traditional Bentley high d

ashboard which houses the automatic retractable touchscreen, with an almost 3D depth. The wood decorates the tops of the doors, with a small Bentley logo on each panel. Most switches and knobs are made from the finest steel and all feel fluid and solid.

No matter the seat, you will be sat in the opulence and sophistication of times past, with a myriad of technology, with screens and computers almost hidden until a button is pressed. You will sense Gentlemen wearing pocket watches, tailored three piece suits and top hats along with ladies in their finest dresses, large summer hats and lacy sunbrellas. The feeling this car gives you is fantastic and you will practically forget there is an outside world.

During the cruise, passengers may wish to try the Krug from the cooler. Three crystal flutes designed by Bentley, influenced by the car’s 21-inch wheels, sit ready at the rear of the cooler. For your comfort, rest your feet on the foot rests, puff up the leather Bentley badged pillows and recline your seat.

The Bentley Mulsanne highlights one clear point: This car was not only built for you to be carried in luxury but built also for you to take off your tie and simply drive. A vessel of this size needs a powerplant to suit and Bentley has therefore updated and refined its 6.75 litre V8 and laced it with a pair of perfectly tuned turbos producing 530 bhp. Now you have the power of the gods to move this 2.6 tonne car from 0-62 mph (0-100 km/h) in just five seconds. The adaptive suspension helps to keep this heavy weight cruising coupled with the ability to grip the road in the bends. An additional option to switch between comfort and Bentley is available, Bentley being their optimal suggested driver’s setting. When you plant your foot on the accelerator, the Mulsanne will produce a satisfyingly surge with assertiveness, and there is no lurching of the body and no turbo lag. The steering is electronically weighted though fluid, whilst efficiency has also been thought about as the V8 will reduce the number of cylinders to four when you cruise.

Overall, Bentley has made a quintessentially British luxury car which concentrates on the driver experience. Each Bentley Mulsanne takes approximately 170 hours to build and you sense every one of them in this true motoring masterpiece.