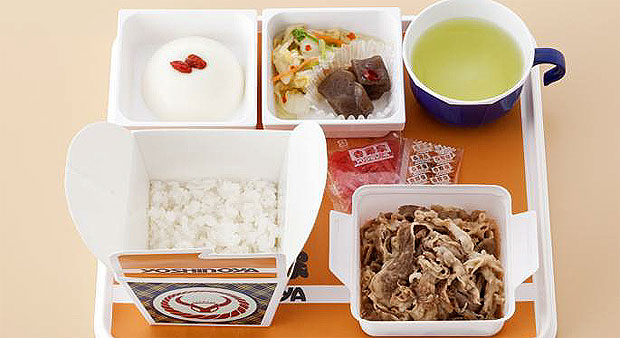 Japan Airlines is collaborating with Yoshinoya Holdings – the largest chain of beef-bowl restaurants, to bring its trademark dish to customers on select international flights from March 1, 2012.

For three months until May 31, 2012, customers travelling with Japan Airlines from Tokyo to New York, Chicago, Los Angeles, London and Frankfurt in every cabin class will be able to enjoy Air Yoshinoya – the Japan Airlines Original version of the establishment’s speciality beef-bowl. 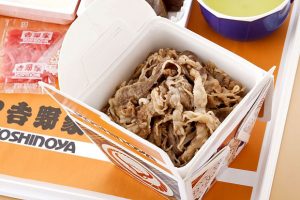 Founded in Tokyo in 1899, Yoshinoya has grown to become a popular Japanese food chain that also has an extensive global presence. With Air Yoshinoya, customers will be delighted at the familiar taste of the well-loved beef bowl at several thousand meters in the air. Specially designed and packaged to be served onboard, the Air Yoshinoya box separates the beef from the rice until customers are ready to enjoy it. Considering the lower humidity in the cabin, Air Yoshinoya also comes with more sauce so that customers taste the same succulence as the beef bowl served in shops. Air Yoshinoya packaging and tray mats are original designs for this in-flight service while the beef, ginger, shichimi (seven-flavored spice) and pickles served are just as customers would find in all Yoshinoya outlets in Japan.

Air Yoshinoya will be served to customers in Premium Economy and Economy cabins as a second meal before arrival at their destinations, and included as an option in a menu of a la carte dishes available any time after the first meal service in First and Executive Class.

Japan Airlines’s Air Yoshinoya is third in a series of tie ups with well-known eateries to present customers a refreshing line-up of in-flight meals. Going forward, Japan Airlines will continue striving to bring customers more delight in meal choices, hospitable services, and an enhanced onboard experience based on the principles of [Tradition], [Innovation] and the [Heart of Japan].