For the charity auction at Only Watch 2011, Jaquet Droz will be unveiling a unique Jaquet Droz Petite Heure Minute model while lending its support to research on Duchenne muscular dystrophy, led by the Monegasque Association against Myopathies. 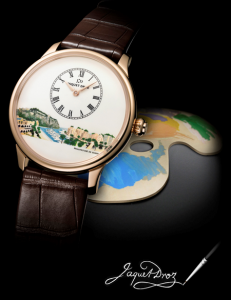 The 21st Monaco Yacht Show, attended by luxury yacht aficionados from all over the world, will run from September 21 to 24, 2011 in Monaco. During the show, Only Watch will hold its exceptional charity auction, which, since 2005, has become ‘The’ venue where luxury watchmaking meets medical research. At the auction on September 22, 2011, under the high patronage of His Serene Highness Prince Albert II of Monaco and jointly organized with the Antiquorum auction house, more than 40 fabulous timepieces donated by the most prestigious watch manufacturers will be put up for bidding. This collection will also make a world tour during the year to appeal to the international community of collectors, with stops in Shanghai, Hong Kong, New York, Tokyo, Geneva…

The Jaquet Droz philosophy of time has always been animated by a spirit of exclusiveness permeated with generosity. This year, the Manufacture from La Chaux-de-Fonds will be supporting Only Watch by donating the one-of-a-kind Jaquet Droz Petite Heure Minute model created especially for the occasion. This exclusive piece proudly boasts an ivory Grand Feu enameled dial adorned with details from one of the principality’s most renowned landscapes, a marvelous specimen of the art of miniature painting on enamel. In choosing to apply this painstaking technique, Jaquet Droz wished to honor an ancestral art with a 21st-century interpretation of the traditions practiced by its founder. It takes a master artisan at least a week, with one eye to the microscope, to finish one of these entirely hand-crafted masterpieces. In addition, this Petite Heure Minute features a self-winding mechanical movement, a double barrel, a 68-hour power reserve with a 22-carat white gold oscillating weight bearing a sunray motif executed by the skilled hand of a master engraver, and a Jaquet Droz’ secret signature. Water-resistant to 3 bar (30 meters), this superlative model comes in a 43 mm watchcase of 18-carat red gold.