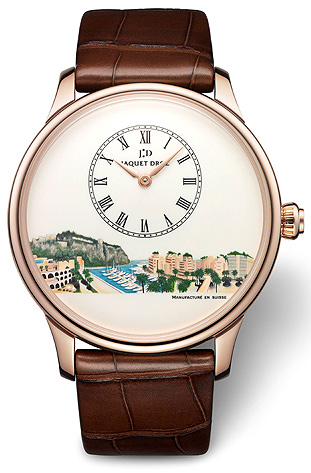 About Jaquet Droz
Pierre Jaquet-Droz (1721–1790) was a Swiss-born watchmaker of the late eighteenth century. He lived in Paris, London, and Geneva, where he designed and built animated dolls, or automata, to help his firm sell watches and mechanical birds. Constructed between 1768 and 1774 by Pierre Jaquet-Droz, his son Henri-Louis (1752-1791), and Jean-Frederic Leschot (1746-1824) were The Writer (made of 6000 pieces), The Musician (2500 pieces) and The Draughtsman (2000 pieces). His astonishing mechanisms fascinated the world’s most important people: the kings and emperors of Europe, China, India and Japan. Some consider these devices to be the oldest examples of the computer. The Writer has an input device to set tabs that form a programmable memory, 40 cams that represents the read only program, and a quill pen for output. The work of Pierre Jaquet-Droz predates that of Charles Babbage by decades.