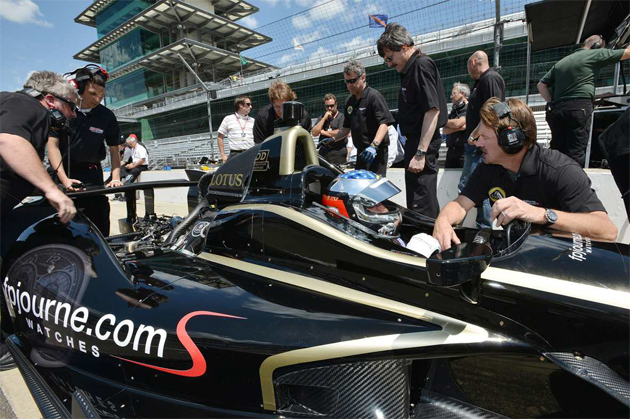 Jean Alesi arrived Monday in Indianapolis to participate to the Rookie orientation and will start his first testing on the oval track during the weekend. Alesi, ex-Formula 1 star, has been confirmed to drive with Fan Force United Team for this year’s Indy 500 next Sunday, May 27th.

We are happy to confirm that Jean has joined racing team Fan Force United. The four coowners of the team, Tyce Carlson, Jason Peters, Scott Williamson and Chris Williams are heading a particularly strong crew. It includes multiple 500 winner Tim Wardrop, engineer for Arie Luyendyk when he set the fastest lap of over 239 mph at the famous Indianapolis Motor Speedway; victorious team manager Ted Bitting, who won the Indy 500 with Arie Luyendyk, and former team owner Greg Beck.

Jean is now working every single minute with his team to get the best out of this Indy 500 and be ready for the 500 mile race, starting with his first sample of the car in Indy’s rookie test on the oval, followed by numerous test drive throughout the week.

Jean Alesi : “We’ve been talking about this race for a long time, and trying to find the right team. I’m very happy to be joining Fan Force United. I trust the team completely and am sure we will do a super job. I did a seat fitting on Monday and from now onwards I’ll concentrate on preparing for the race ahead of the other drivers getting out there. Last week I’ve spent again two days in Italy at the Dallara factory on their simulator, which is an incredibly sophisticated bit of kit and on which I have learned so much about oval techniques and set-up. So I feel ready for Indy 500, waiting impatiently to be doing real practice to get the feeling for the car and the track. The race is now just three weeks away, and we’re going to be working flat out up to that date. I can’t wait.”

Chris Williams, co-owner Fan Force United: “We are thrilled to be running the greatest spectacle in motor racing with a driver as legendary as Jean Alesi. Our goal has always been to win the Indy 500, and we are working hard to achieve that with Jean, Lotus and F.P.Journe. Our team has a huge amount of experience, and I can’t tell you how excited we are.”

François-Paul Journe : “It’s a great honour to partner with Lotus, Jean and Fan Force United for this world famous Indy 500. I am proud of my close friend Jean who is wearing the Centigraphe Sport, and having the F.P Journe logo emblazoned on the Lotus-powered car in tribute to the new lineSport. As the days go by, we are more excited by this extraordinary racing challenge with a driver of such immense capability.”