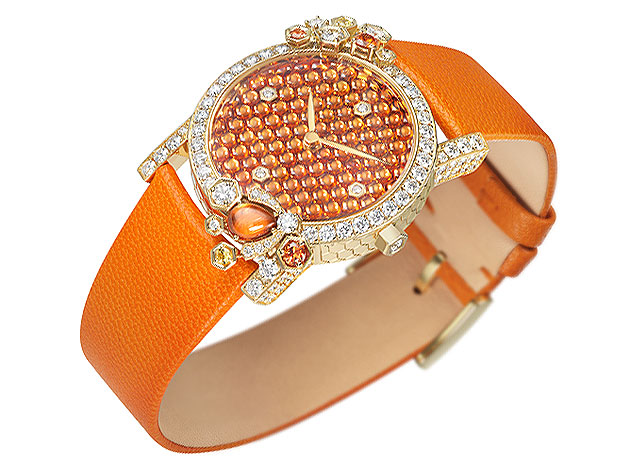 In Chaumet’s animal theatre, the bee holds the title role. A favourite of the Empire period and of Napoleon 1st, this fascinating insect has been an emblem of the Maison since 1780.

The Attrape-moi… si tu m’aimes collection has been putting the bee centre-stage since 2007 and today a very High Jewellery scenario has been written especially for it… The bee, represented by an orange sapphire cabochon stone, is set on the bezel and seems to want to join the honeycomb pattern made of diamonds and yellow and orange sapphires as it follows a sparkling path of diamonds that runs around the extraordinary dial. 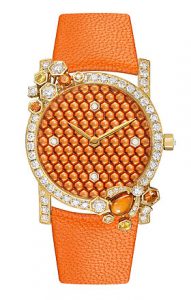 The honeycomb motif is repeated endlessly, adorning the side of the case, the crown of the winding mechanism and the orange honey-coloured dial, a shade chosen as the ultimate symbol of the beehive.

Thanks to the savoir-faire of the master craftsmen, 116 orange sapphire cabochon stones have been cut into honeycomb shapes and skilfully set onto the dial’s gold base along with four diamond indexes. On the reverse, the sapphire glass on the case-back reveals an automatic rewinding mechanism embellished with a honeycomb motif on its oscillating mass.

Attrape-moi… si tu m’aimes, is a jewellery watch, presented in a limited series of 12 pieces, in yellow gold set with 289 stones representing a total weight of 11, 55 carats.

Chaumet has also been pre-selected by the jury of the Geneva Watchmaking Grand Prix for the award of jewellery and artistic crafts watches with the model “Attrape-moi… si tu m’aimes Cabochons”.