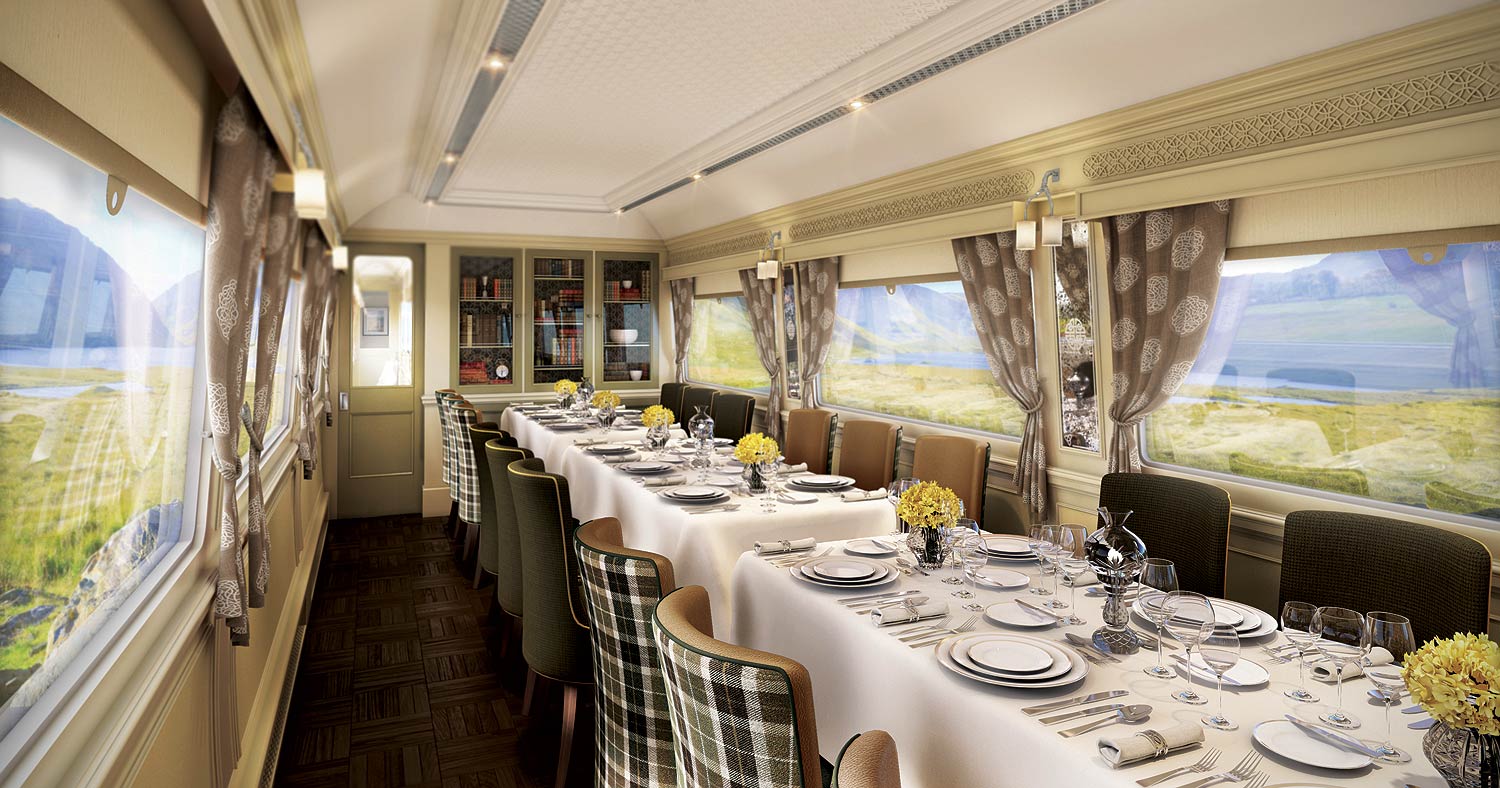 Luxurious Magazine’s Bon Viveur, Jon McKnight, looks forward with some excitement to the unveiling of an Irish country house with a difference: the Belmond Grand Hibernian

Ireland’s country houses are famed throughout the world for gracious living, quiet luxury, and good old-fashioned hospitality. They are elegantly furnished, magnificently proportioned, and populated, it seems, with far more than their fair share of the interesting, the intellectual, and the stylish.

The country house tradition has long been an irresistible attraction to countless people around the world who can claim Irish ancestry – including President Kennedy who, like 33 million of his fellow citizens, or 10% of the US population, was proud to consider himself an Irish American. That country house allure, perhaps hard-wired into the DNA or the result of a yet-undiscovered human homing instinct, is responsible for a generous slice of the Irish tourist industry.
But even Ireland’s country houses have their limitations. 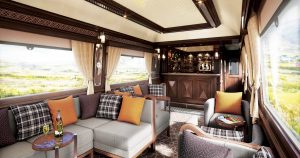 However comfortable they are, and however fascinating your fellow guests may be, the combination of the weight of their stonework and the effectiveness of gravity means they tend to stay in one place. And while that one place may be a wonderful location, with breathtaking views, lungfuls of fresh country air, and excellent company, the novelty can wear off all too quickly. So imagine how exciting it would be if some unseen giant hand could pick up that country house and move it around the Emerald Isle to give you ever-changing views throughout your stay. Sadly, with gravity being one of the Earth’s few resources that isn’t running out, it simply isn’t possible. Ireland’s country houses are staying right where the architects intended them to remain.
But that’s about to change.

Belmond, the owner of some of the world’s most luxurious hotels and travel experiences, has come up with what, in hindsight, seems like a startlingly obvious solution: a country house that moves. Which is why, in August 2016, a privileged group of 40 people will set off on the inaugural Grand Tour of Ireland in what can only be described as an Irish country house on rails – the Belmond Grand Hibernian.

If you were being picky, or had one of those souls devoid of a shred of romance, you could call the Belmond Grand Hibernian a train – just as you could dismiss The Ritz as a B&B or Monte Carlo as a seaside village with a gambling licence. But there are trains, and trains… Tokyo trains where staff are employed to physically shove passengers into the already crammed carriages, or London commuter trains where you discover that the “seat” you paid for was merely metaphorical as you stand all the way to your destination. And then there’s the Belmond Grand Hibernian. Apart from the fact that it does run on rails and is pulled by an engine, it has about as much in common with trains as Concorde had with an Aeroflot aircraft in the darkest days of the USSR.

The Belmond Grand Hibernian is unlike any train most people will ever have seen, let alone experienced.

The built-in bookcases with leather-bound volumes are an indicator that this is indeed something very special, while the corniced ceilings and panelled walls of the bedrooms are so authentically Irish country house that you’ll pinch yourself just to be sure you haven’t fallen asleep in a stately pile and dreamed you were actually on a train. Take a look at the pictures and you’ll see what I mean. There are dado rails, fine carpets, desk lamps, framed prints, fresh flowers in vases, huge comfortable beds, armchairs, sofas, cushions, coffee tables, a wood-panelled bar, and tables set for lunch. And if you’ve been on almost any other train recently, you might be forgiven for thinking of a table as an airline-style drop-down flap with a dent in it to stop your coffee sliding into your lap. or a Formica slab just too small to let you and the stranger opposite use your laptops at the same time without clashing lids. But this is Belmond Style, and the tables here are large, draped in crisp white linen, and laid with all the care and precision clients are used to at The Ritz or any one of the world’s other fine restaurants.

Trains, as we all know, are all about compromises. Only the Belmond Grand Hibernian isn’t. Not in any single respect that’s obvious to me, at any rate. 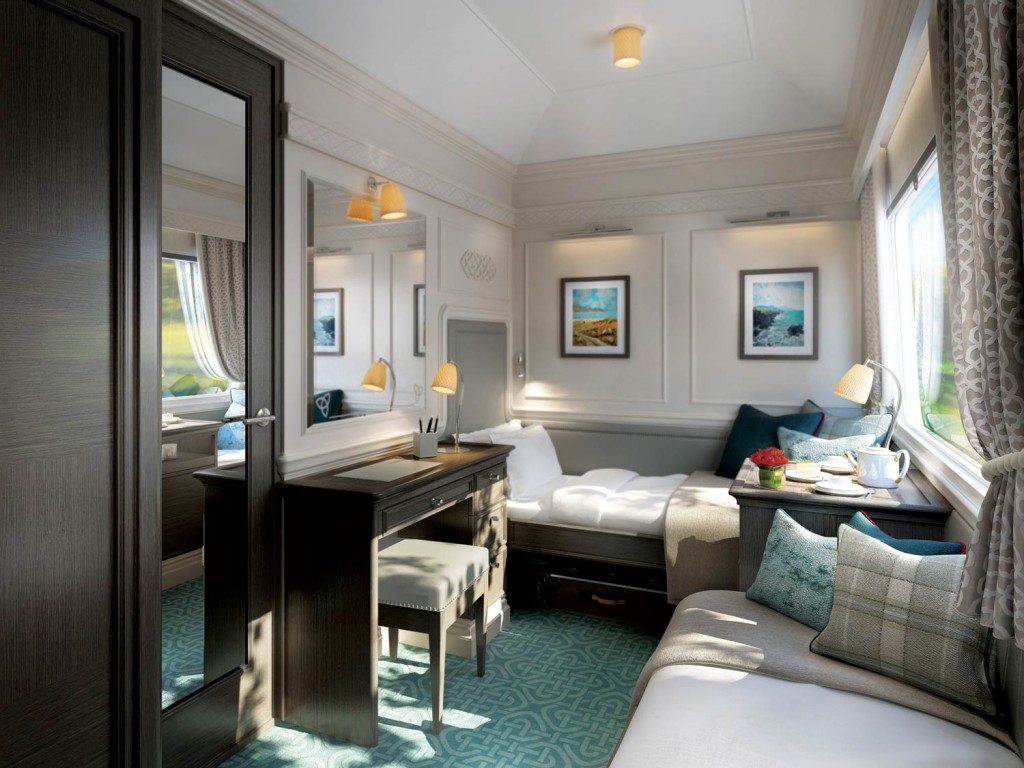 Belmond have simply presented the designers with a handful of empty railway carriage shells and told them, in effect, to turn them into an Irish country house fit for the travelling elite. It’s quite possible that Belmond didn’t even mention that the designs were intended for a train at all, for the result is 100% Irish country house and 0% train. And that’s a total triumph for James Park Associates, the designers who turned Belmond’s dream into a rail-ready reality.

So successful have they been that if someone could carry you aboard in your sleep and leave you to wake up in one of the delightfully decorated bedrooms with sunlight streaming through the windows, you really wouldn’t be able to believe you were on a train at all until the landscape outside began to move. And that’s where the Belmond Grand Hibernian outclasses any Irish country house that’s ever been built. Even the most demanding of dowagers had to accept that while she could avoid the vulgarities of shopping by having things sent round by tradesmen, her writ didn’t run to something as immovable as the landscape.

And even if it had been possible, the good people in those communities would have missed their local attractions terribly, and depriving them, even temporarily, wouldn’t have been considered polite behaviour in those parts. So if the dowager fancied gazing out over the Giant’s Causeway, for instance, she knew she’d have to make the effort to go there herself.

Whereas, on the Belmond Grand Hibernian, you actually can have your favourite Irish attractions “sent round”. Without even leaving your snuggly bed, you could be enjoying the lakes of Killarney one day and the Old Bushmills Distillery the next, though it must be said that lakes, causeways and especially whiskey distilleries are best enjoyed in person – and certainly worth getting out of bed for.

But before you think of going, it’s worth considering where you’ll be staying. So many other companies, if they’d had the wit to think of anything as imaginative as the Belmond Grand Hibernian at all, might have ended up with an Irish theme pub on rails. You can imagine the sort of thing, and probably wouldn’t want to spend time on it. But Belmond does things properly, including its research. The interior designs reflect Ireland’s unique character and mythology with colours inspired by the flora and fauna of the countryside. 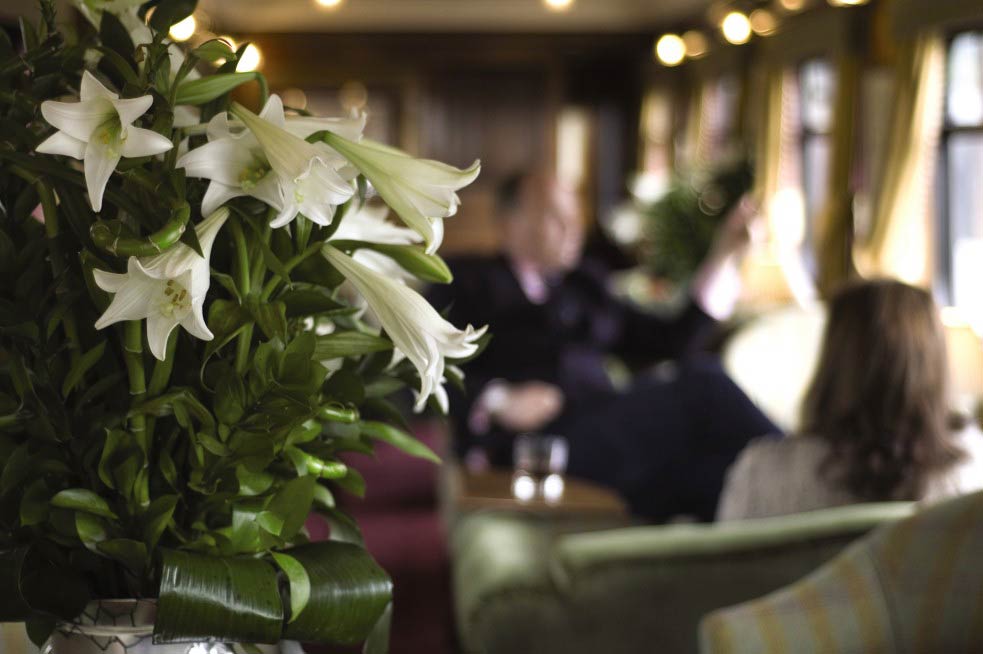 Who knows who you’ll be rubbing shoulders with on the Belmond Grand Hibernian?

Each Irish county’s tartan lends its colours to the decor of individual carriages, with Down featuring shades of oranges and browns, Kerry shades of purple and blue, Waterford shades of green, Leitrim accents of red, and Fermanagh silver and gold. Of the two dining cars, Wexford features Irish motifs and tweed fabrics while Sligo is an elegant restaurant with a Georgian feel in relaxed greys and warm woods. 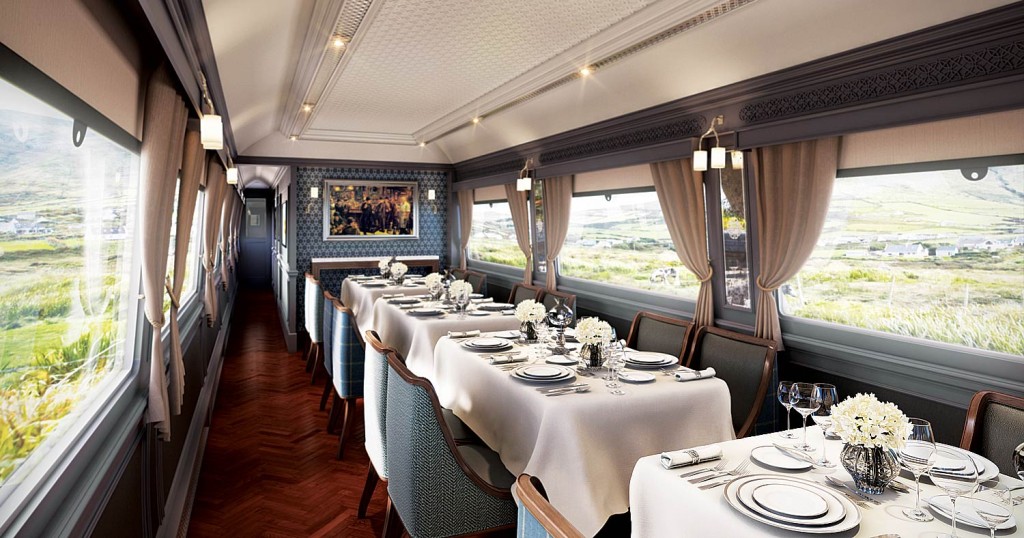 The food promises to be as classy as the dining cars themselves, with authentic Irish fare including artisan cheeses, fresh seafood and smooth Irish whiskies. The observation car, Kildare, has the warm atmosphere and stylishness of an Irish saloon and will be, for many, the social hub of the Belmond Grand Hibernian.

Who knows who you’ll be rubbing shoulders with on the Belmond Grand Hibernian? Will it be a titled English Lord, an American billionaire, or a mysterious character who really could be straight out of an Agatha Christie novel?

The one thing you can be certain of is that your fellow passengers will, like you, appreciate the finer things in life and consider it worth every cent to spend the price of a second-hand car (if they even know what a second-hand car is) on a two, four, or six-day rail journey around the island of Ireland. 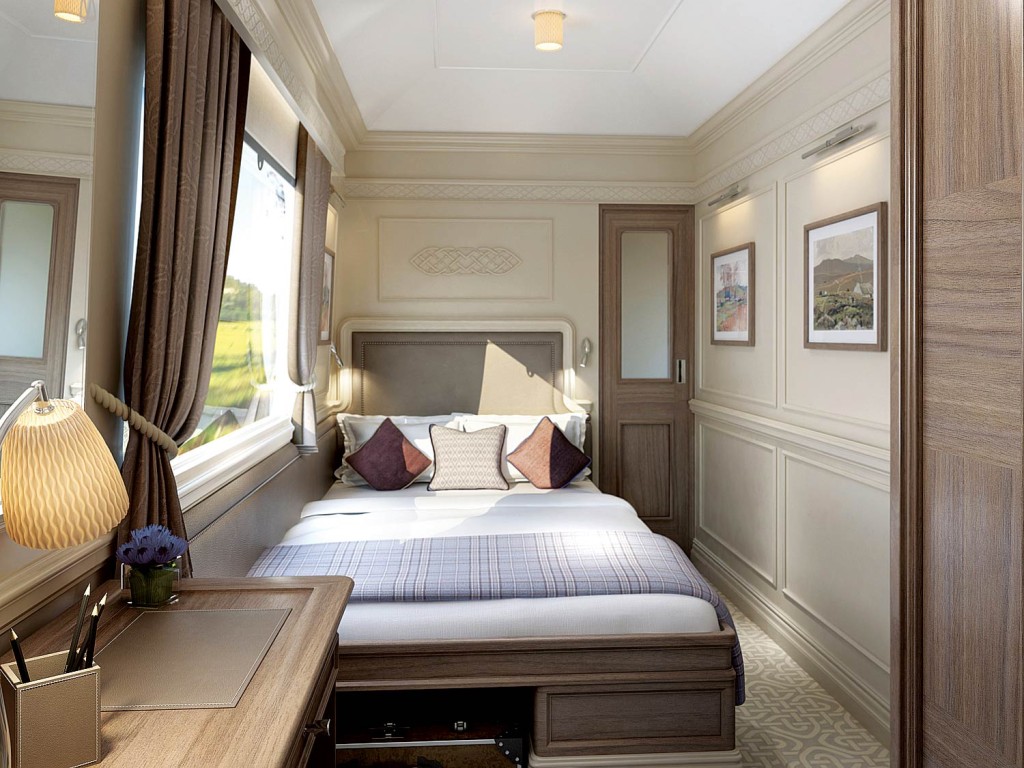 The first journey will be Legends And Loughs, a four-night tour of the Republic of Ireland. Travelling from Cork to Killarney, Galway and Westport, highlights include a behind-the-scenes tour of Jameson’s Whiskey distillery, kissing the Blarney Stone with private access to Blarney Castle Gardens, enjoying the spectacular lakes of Killarney, the breathtaking scenery of Connemara National Park, sporting activities at Ashford Castle, and sheepdog trials, traditional Irish music and crafts in Galway.

The two-night tour, Realm Of Giants, travels North from Dublin to Belfast and Portrush, visiting the award-winning Titanic Experience in Belfast, the astonishing Giant’s Causeway and the Old Bushmills Distillery for a sample or two of the famous 400-year-old whiskey. Of course, if that’s not enough (and who can blame anyone for wanting to stay aboard for longer?) you can join both journeys together to create a six-night Grand Tour of Ireland.

Just as you might on a cruise ship, you can go on excursions to immerse yourself in the authentic Ireland from fiddles and flutes that get toes tapping in a traditional pub to the fabulous folklore tales of mischievous faerie folk, flame-haired pirates and ghostly banshees, and the literary prowess of some of the world’s most celebrated wordsmiths including Oscar Wilde, James Joyce and Samuel Beckett.

If you’re a keen golfer, you’ll enjoy access to some of the world’s finest golf courses as part of the journey. The Emerald Isle has more than 300 golf courses including more than 50 championship class courses, and daily tee times can be arranged as well as tailor-made golf extensions before or after your journey. Prices start from €3,160 per person for the two-night journey and €5,420 per person for the four-night journey and include all meals, drinks, entertainment and excursions. 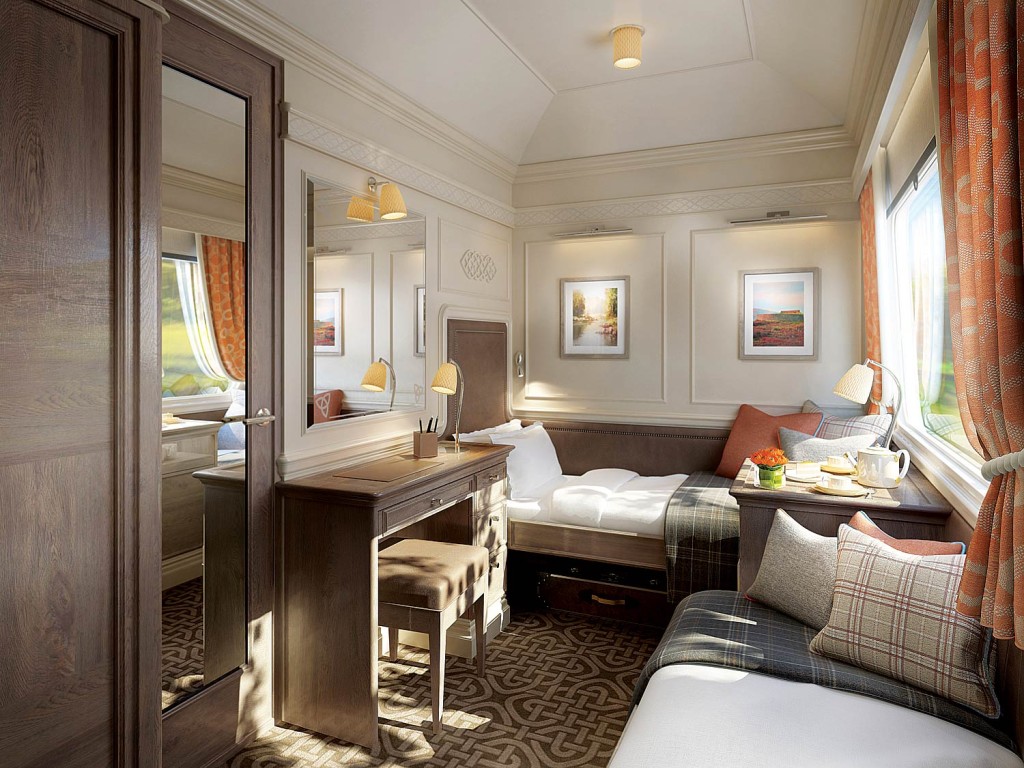 But a word of warning: once you’ve experienced the Belmond Grand Hibernian, you’ll almost certainly develop a taste for ultra-luxurious train travel and might even end up as part of what one must surely, in the tradition of the Jet Set of the Forties and Fifties, call the International Train Set.

For Belmond exists to tempt you, and its collection of internationally-envied trains include the Royal Scotsman, the Northern Belle, the British Pullman, the Eastern & Oriental Express, and the Hiram Bingham. Plus, of course, the jewel in its crown, the most famous train in the world, the immortalised-on-page-and-screen and utterly palatial Venice-Simplon Orient Express.

My contacts at Belmond tell me there’s an exclusive club of wealthy individuals who are so captivated by these palaces on wheels that they’re not content until they’ve collected the whole set. And who, if they had the money, could blame them?

• Find out more about the inaugural journey of the Belmond Grand Hibernian at www.belmond.com/grandhibernian