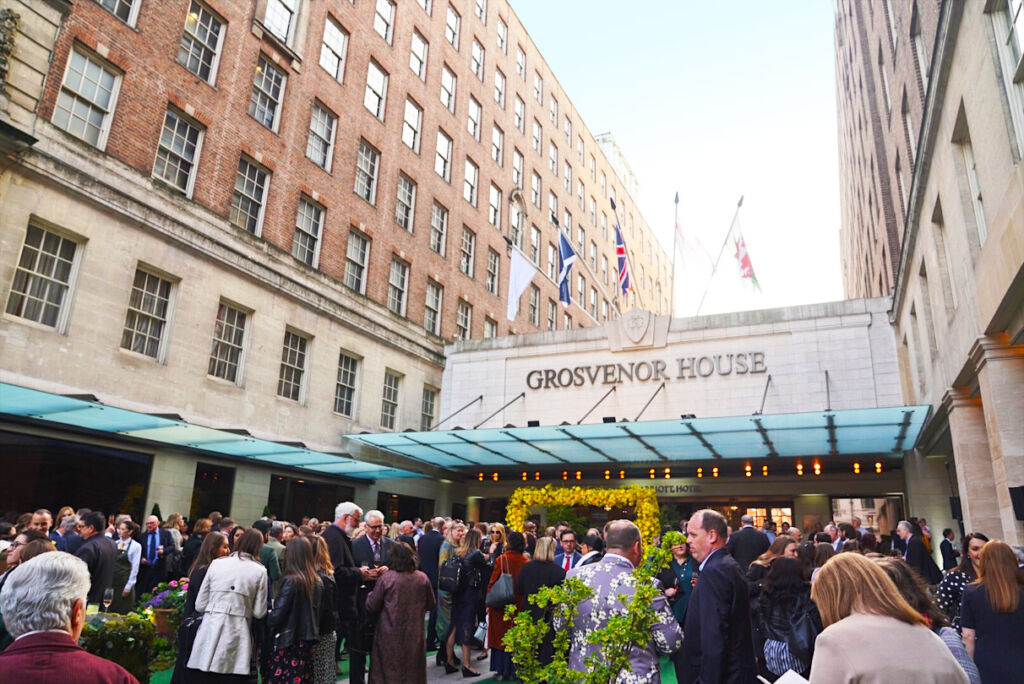 Celebrating
We were honoured to be on the invite list for the memorable 90th-anniversary celebrations, attended by 650 guests including celebrities, Donna Air, Caroline Flack and Victoria Pendleton. The five-star property marked nearly a century of history in style, and saw the main front courtyard area transformed into a Hyde Park-inspired garden complete with music from a string quartet, Deutz fine champagne, canapés and an array of beautifully concocted alcoholic and virgin cocktails. 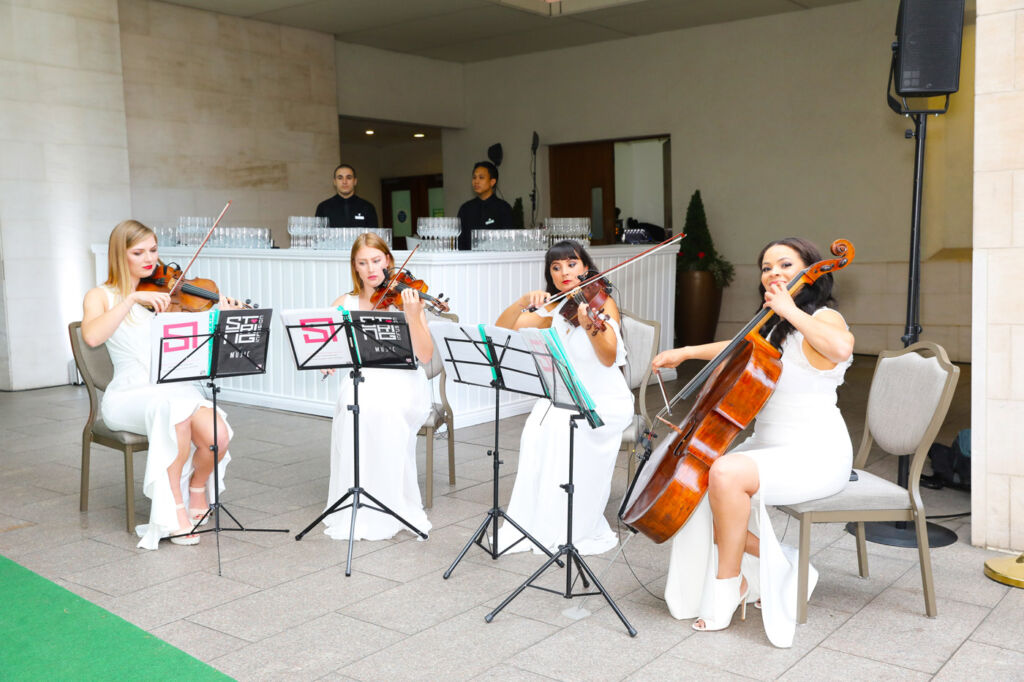 If this wasn’t enough, JW Steakhouse offered the chance to sample meat from a gigantic cut, plus bowls of fresh pasta with a choice of sumptuous sauces.

Sleeping and relaxing
There are four classifications of rooms at Grosvenor House, spanning from Deluxe to Family, before you get to the upper echelon of suites which we were fortunate enough to sample during our stay. 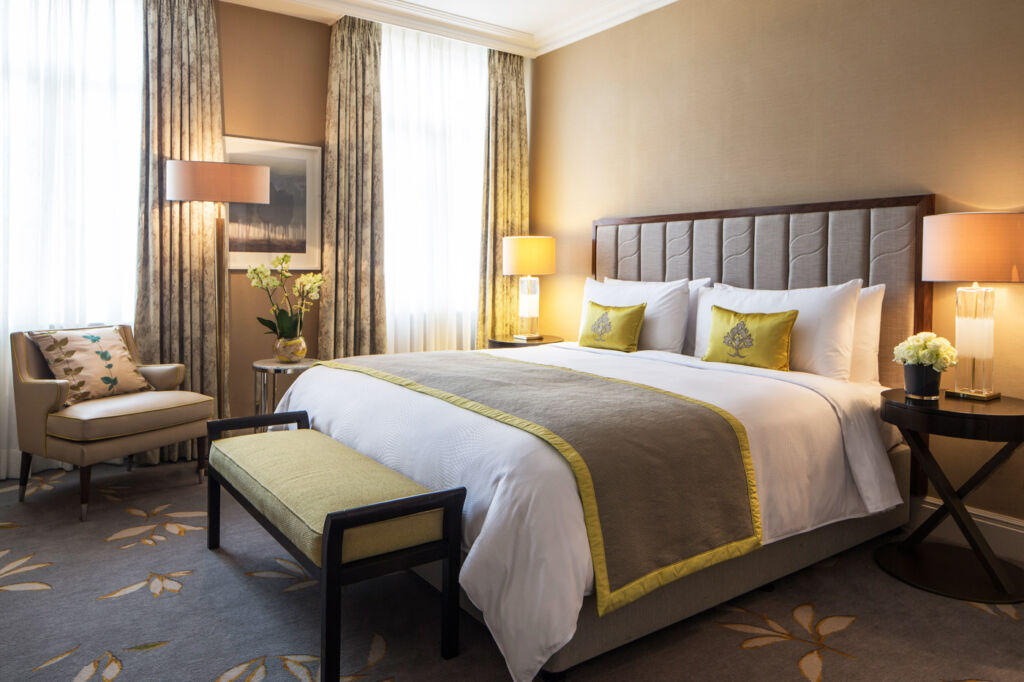 We were handed the keys to a light and airy Premium Executive Suite on the eighth floor, which looked out over Park Lane and a smidgen of Hyde Park. It came fully furnished with a king-sized bed with crisp linen and the legendary soft Marriott bedding. Separated by its own hallway, the well-appointed lounge area came complete with a writing desk and one of the suite’s two large flatscreen TVs. 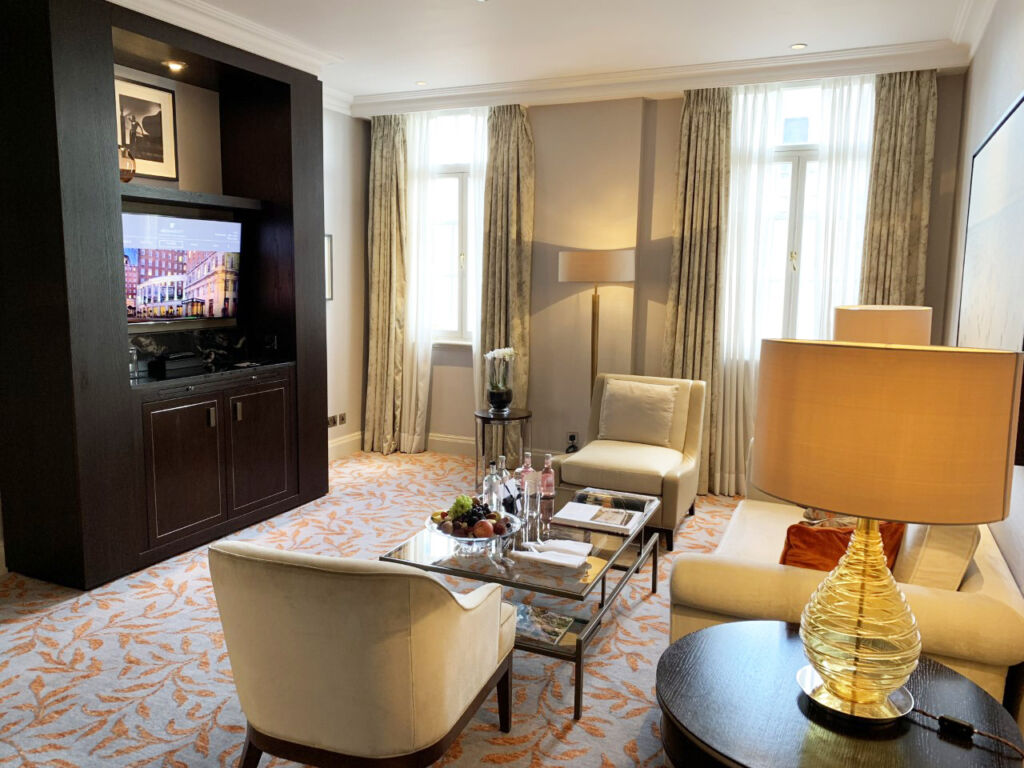 The adjoining white marble-clad bathroom was equally as spacious, and we took advantage of the walk-in rain shower complete with a built-in bench and Bvlgari accessories, a separate bathtub, and a hi-tech toilet that was abundant with various buttons, functions and a seat warmer!

Dining and savouring
One thing’s for sure at Grosvenor House is that you won’t go hungry, and therefore there’s no need to hit the surrounding streets in search of sustenance. For those after a bite to eat, guests have a choice of eateries with varying menus and degrees of sophistication, spanning the Anatolian gastronomy of Rüya London, to the award-winning Corrigan’s Mayfair. This is of course excluding room service for residents who don’t wish to leave the confines of their luxurious accommodation. 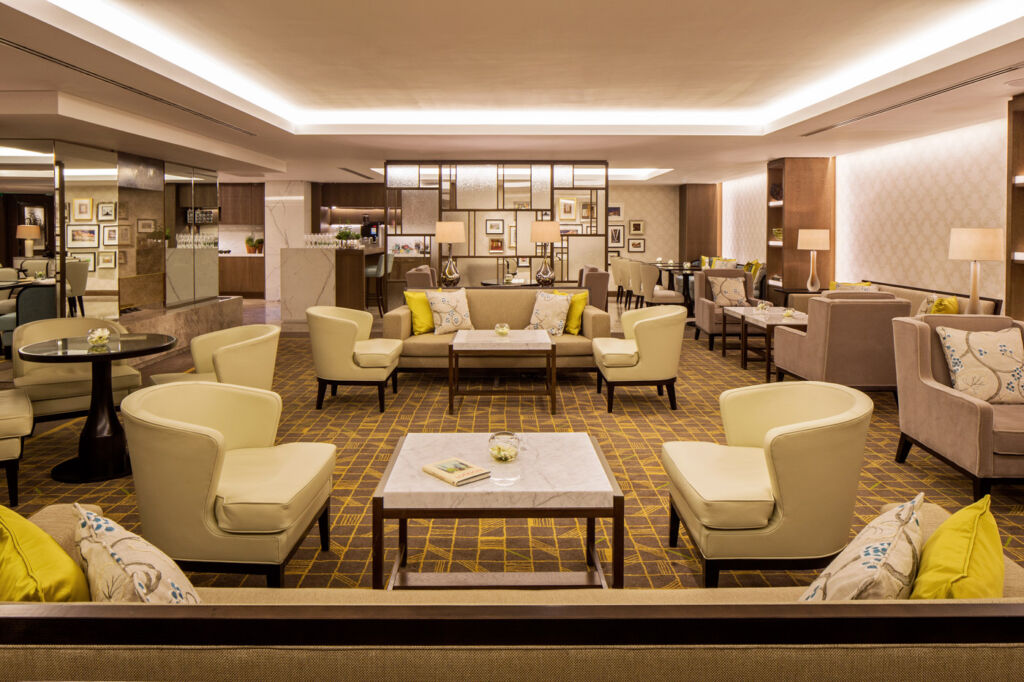 The Premium Executive Suite that we stayed in, also grants privileged access to the Executive Lounge on the ground floor, which has a similar feel to what you would expect from a Business Class lounge at an airport. Furnished with comfortable seating and an open fireplace, food is served throughout the day, and during the afternoon, from 13:00 to 16:30, scones with whipped cream and jams, plus some nibbles such as vegetable crisps are available, before various wines and beers arrive at 17:30 to mark the start of “Cocktail Hour”. This is swiftly followed by “Evening Delights” at 18:00, which is substantial enough to be dinner. Dishes when we went offered the likes of delicious potato salad with tuna, cheese, tomato and black olive skewers, and chicken in a delightful cream sauce. 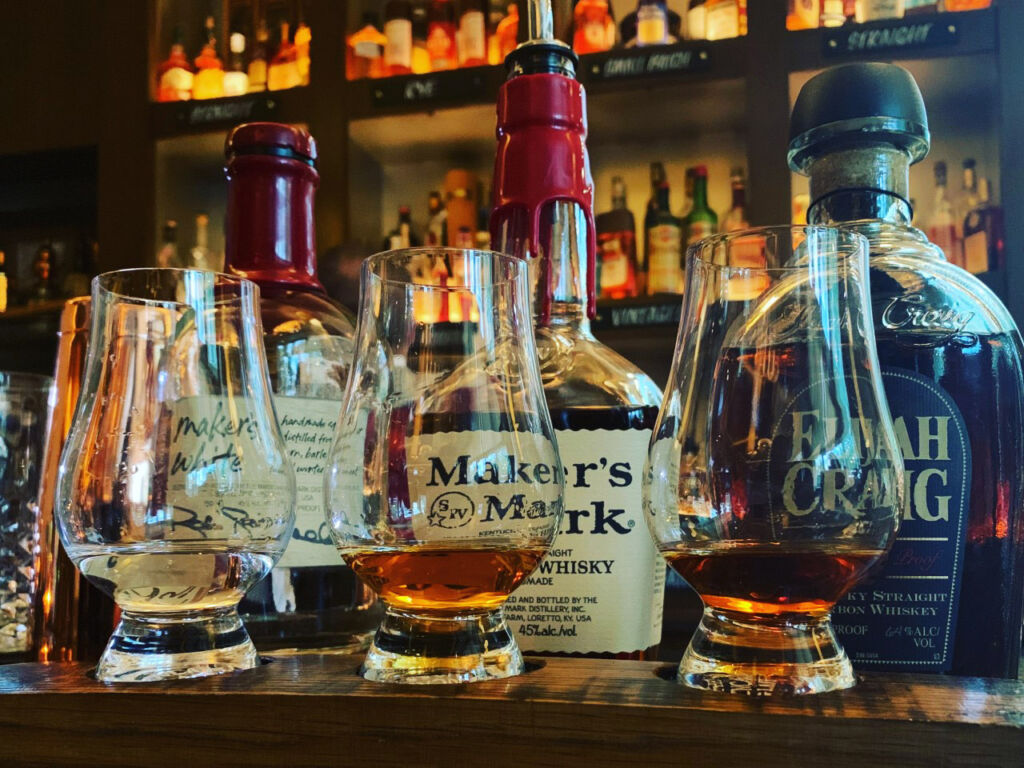 After whittling away the afternoon in the Lounge, and resisting the temptation to over-indulge, we headed to the Bourbon Bar at the rear of the relatively casual JW Steakhouse restaurant next to the Park Lane entrance. This is one of three bars at the property, and boasts some of the rarest Bourbon whiskey from the USA, thanks to an eye for precious lots at auction. 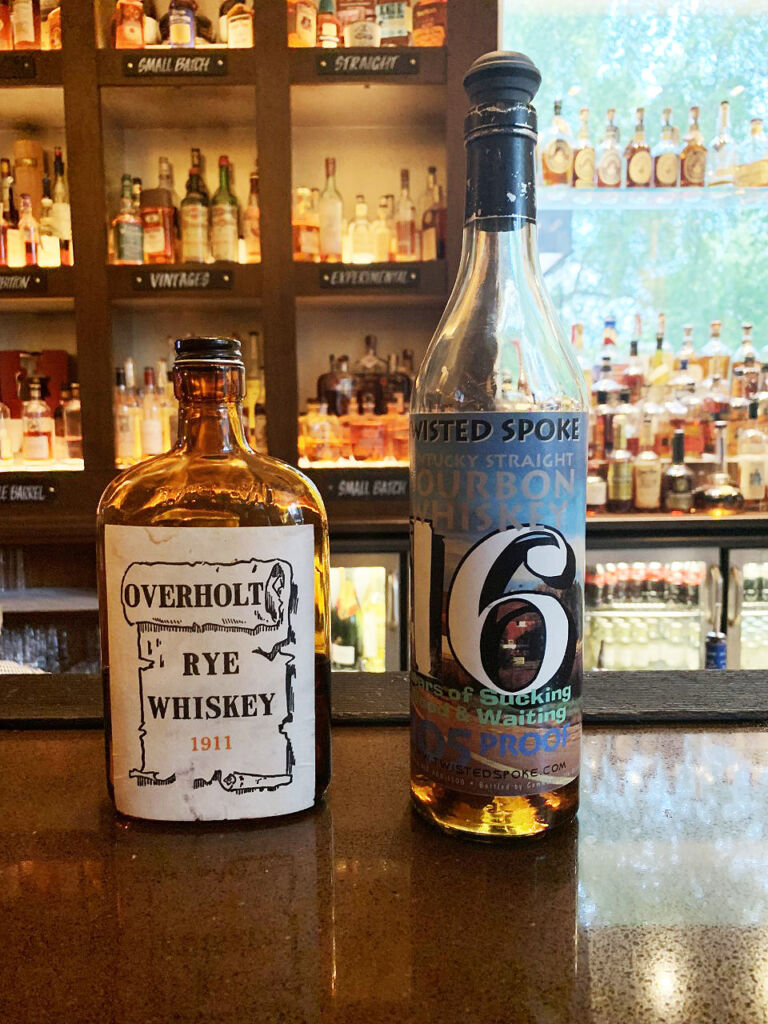 To get an appreciation of what this establishment has in its inventory, i.e. around 300 different bottles, we were guided through a five-strong flight, as well as some key historical facts about Bourbon, by the very knowledgeable and enthusiastic bartender, Robert Sreter.

Starting off with an unaged Maker’s Mark White, to then be able to show the effects of the ageing process, this was soon joined by the much more palatable Maker’s Mark, and Elijah’s Craig, one of Robert’s favourites, which I quickly inherited his passion for. The real highlight, however, was the exceptional privilege of sampling the uber rare £500-a-shot Overholt rye whiskey from 1911, and the £1,000-a-shot Twisted Spoke 16-year-old from the Commonwealth Distillery Co. in Kentucky. It was literally like tasting a piece of history, and a memory that will undoubtedly be savoured for many years to come.