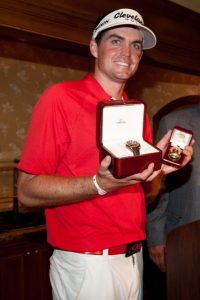 After defeating Jason Dufner in a thrilling three-hole playoff, Keegan Bradley was presented with the OMEGA Seamaster Aqua Terra Annual Calendar timepiece on Sunday to commemorate his win at the 93rd PGA Championship, golf’s final major, which concluded Sunday at the Atlanta Athletic Club.

With his come-from-behind, 71-64-69-68=272 (-8) victory, the rookie Bradley became the seventh-consecutive, first-time major champion.  After he triple-bogeyed the par-3 15th hole, Bradley birdied three of the next four holes, including the first hole of the playoff.  The 25-year-old Bradley turned professional in 2008 after graduating from St. John’s University.

“We are delighted to present this exquisite timepiece to Keegan Bradley after this thrilling win here at this storied tournament,” said OMEGA President Mr. Stephen Urquhart. “With the 2011 PGA Championship engraving on the moving rotor of his new OMEGA Seamaster Aqua Terra Annual Calendar, we are proud that this timepiece will help commemorate this very special win in Keegan’s career.”

The 93rd PGA Championship marked the first event of OMEGA’s new five-year partnership with The PGA of America, which provides for multiple “Official Timekeeper” designations and represents a major breakthrough for OMEGA in the sport of golf in the United States.

The 94th PGA Championship, where OMEGA will again serve as Official Timekeeper, will be held Aug. 9-12 on The Ocean Course at Kiawah Island, S.C.