The first Embraer E190 aircraft to be fully purchased by Kenya Airways touched down at the Jomo Kenyatta International Airport in Nairobi on 30 August 2012. The aircraft is expected to boost the airline’s expanding fleet and service new routes and frequencies on its growing African network.

Speaking when he officially received the aircraft, Kenya Airways Chief Executive Officer Titus Naikuni said the acquisition of the new Embraer underlined the significance of this particular aircraft model to the company’s 10-Year Growth Plan.

“The Embraer 190 is a versatile aircraft suited to our growth ambitions on the African continent. Given its mid-range capabilities, it aptly supports our plans to fly new routes and increase frequencies on existing ones,” said Naikuni. 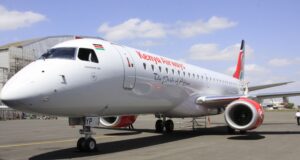 After a vigorous two day in-flight testing regime in San Jose Dos Campos at the Embraer assembly plant, the new aircraft flew to Kenya from Brazil where it was manufactured by a team led by Captain Patel Parul assisted by Captain Kiki Onyonka. The aircraft arrived to a jubilant reception by Kenya Airways cabin and ground handling staff, led by the chief executive officer. Naikuni emphasized that the new acquisition brings the airline closer to its vision of flying to every capital in Africa by 2016. It currently flies to 46 destinations in Africa with Nairobi as the hub. Kenya Airways now has a fleet of eleven Embraer aircraft comprising a mixture of both E170 and E190 models.

“We are modernizing and expanding our fleet as we seek to consolidate our presence in the African airspace. This first fully-owned Embraer aircraft signifies our commitment to that goal,” explained Naikuni.

The Kenya Airways CEO said that the new fleet would lead to fleet optimization by freeing larger jets to operate regional and continental routes, which will translate into better customer care and boosting frequency of flights.

Besides enhanced comfort with more shoulder room, the E190 will offer state of the art in-flight entertainment technology. It also has a wider aisle and more spacious cabin than its E170 predecessor with a capacity of 98 to 106.

Kenya Airways has nine more Embraer E190 aircraft on order with six expected to join the fleet every month from now. The remaining three arrive in May, August and November 2013. The airline has previously acquired Embraer aircraft through either leasing or debt-financing. In May, Kenya Airways took delivery of the last of three E190s acquired from Air Lease Corporation. The airline has also ordered nine Boeing 787 Dreamliner aircraft to be delivered by 2014 partly financed using proceeds from the Rights Issue successfully concluded in June. Currently, KQ uses Embraer aircraft on domestic and short regional routes including Kisumu, Entebbe, Kigali, Bujumbura, Addis Ababa, Djibouti, Maputo, Gaborone, Kilimanjaro and Nampula.