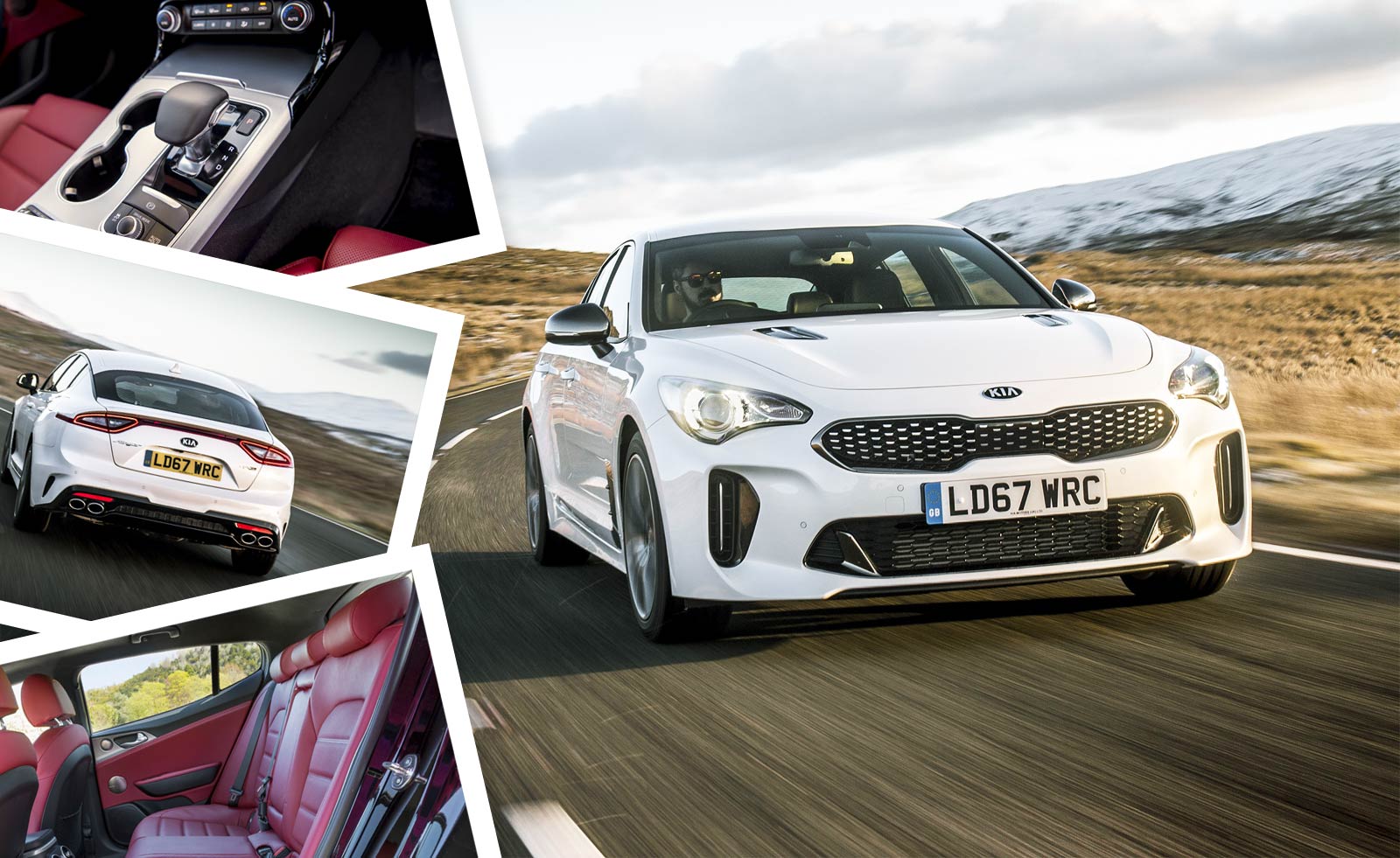 Float like a butterfly, sting like a bee. As I put metal to the floor in KIA’s 2.0-litre T-GDi GT-Line S, I wonder if the company’s Frankfurt design team has a Mohammed Ali fan among them. Never has a car been more appropriately named. This 4-cylinder, 16-valve beauty is a stinger by name and stinger by nature. Top speed: 149mph.

The rear-wheel-drive Stinger is KIA’s first grand tourer. Originally a concept car, she was initially unveiled in Frankfurt as the ‘GT’ back in 2011. So why the delay in production? Apparently KIA’s desire to evolve into a design-led challenger brand, as well as rigorous worldwide testing – and most importantly finding a location to build this modern-classic gran Turismo. The Stinger is now produced at the Sohari factory in South Korea, a production line that takes CO2 emissions, reducing waste and increasing recycling very seriously. It has planted 24,500 trees in and around the facility.

But enough of the eco hacks – let’s get back to the design of this direct-injection beauty. 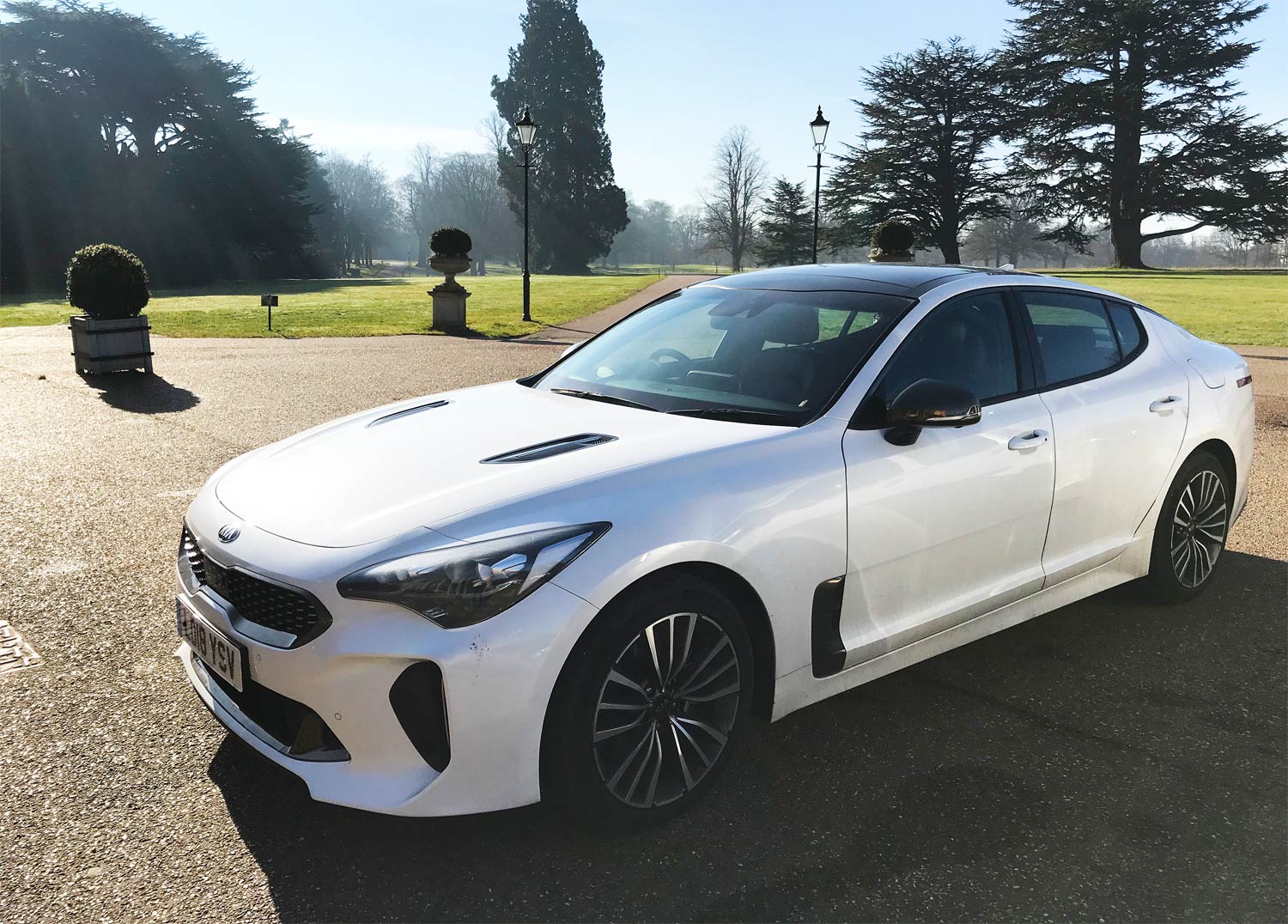 Her long bonnet, short front overhang, and long wheelbase with sculpted flanks that evoke the age of the Seventies grand tourers. The large lower grille and air intake, 18” alloys, dark chrome headlights and quad exhaust pipes on the petrol version are sleek and seductive. And I love the little roof fin, giving the Stinger a baby shark-like appearance, especially with its refined grille and snazzy headlights. The Stinger has a commanding width of 1,870mm.

European Head of Design Gregory Guillaume took his design inspiration from watching grand tourers en route to the French Riviera when he was a boy.

“The Stinger has nothing to do with being the first to arrive,” he tells us. “This car is about the joy of the journey, when reaching your destination can be an anti-climax. It’s about passion.” 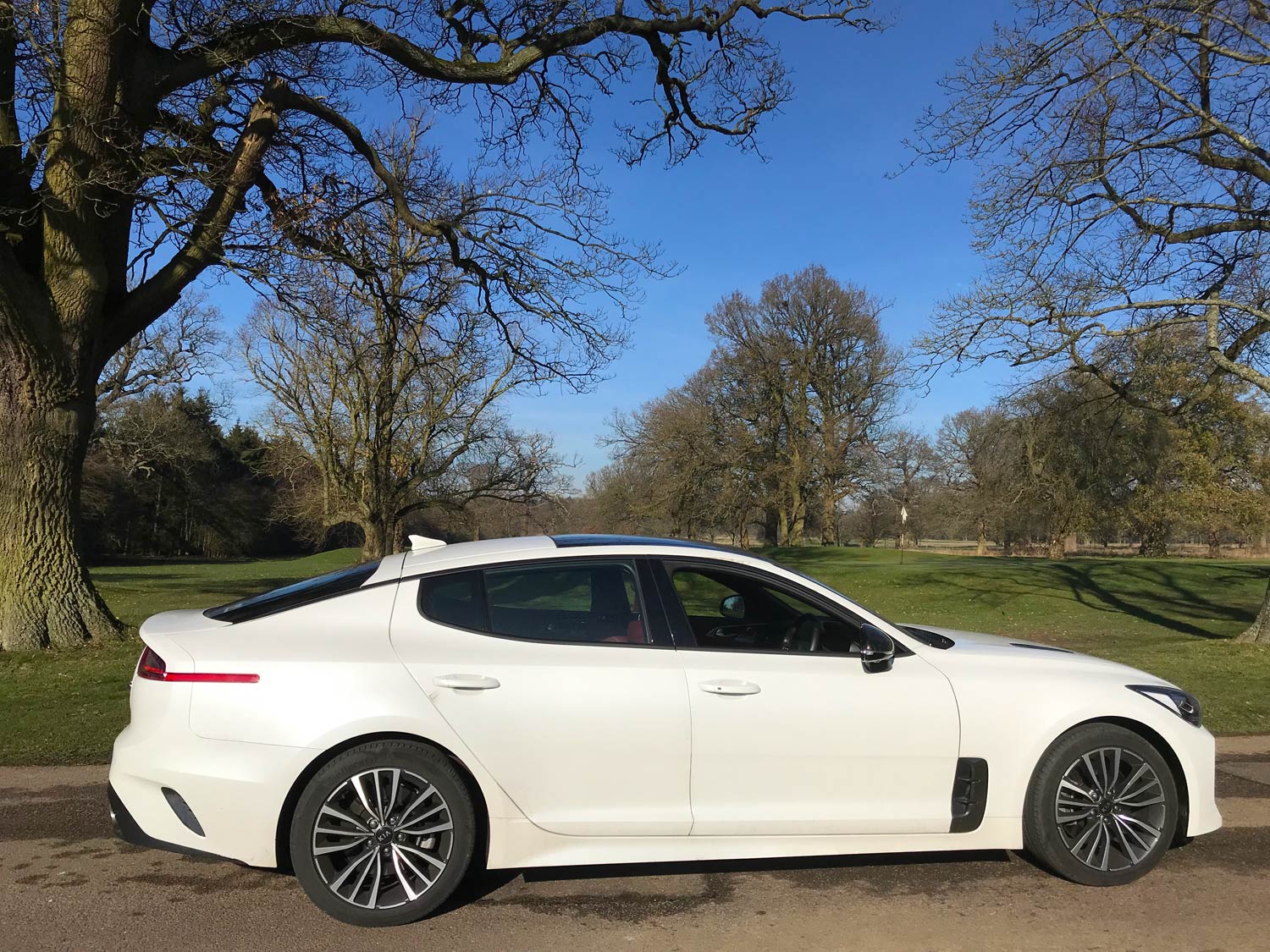 A passion for aerodynamics is evident in the Stinger: Air curtains at the front and finned gills behind the rear wheel arches to reduce wake. While the rear spoiler has a slight ducktail shape to reduce lift. I imagine Starsky doing a body roll over its expansive hood; it’s the only car Miami Vice producers would have allowed on set. But the Stinger is so much more: modern aerodynamic elegance and a turbocharged engine with state-of-the-art driver aids and connectivity systems. And sexy tinted glass which perfectly complements the white paint of my Stinger loan car. 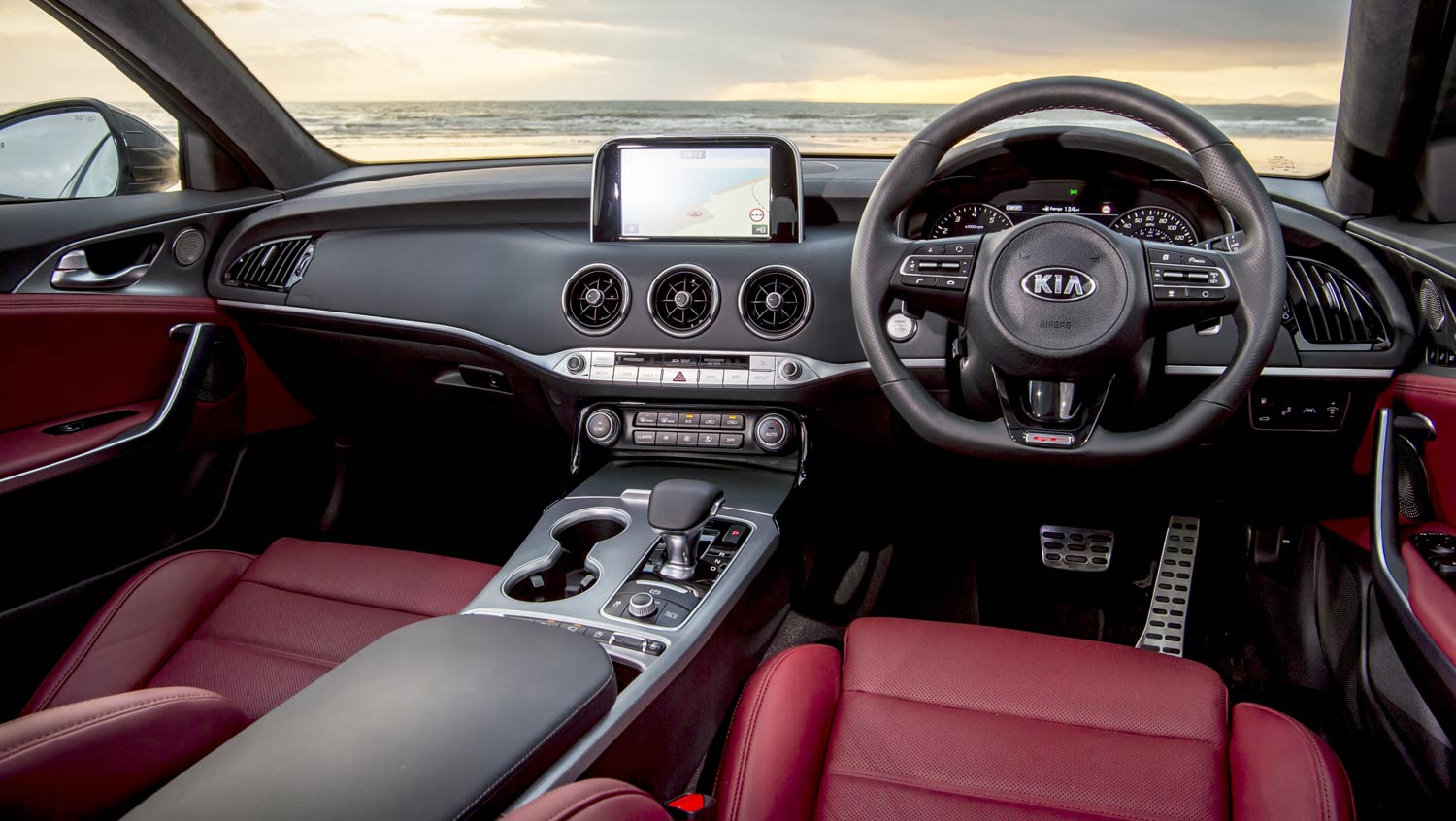 I’m testing the GT the day I hand back a KIA Sportage, which involves a completely different driving position. Whereas the Sportage is elevated, in the Stinger I’m down close and personal in the supportive leather seats. I feel much more engaged with the driving and my twitchy right foot just wants to take this cool cat to the races. Leather also adorns the armrests, the adjustable D-shaped steering wheel and the gear shift. 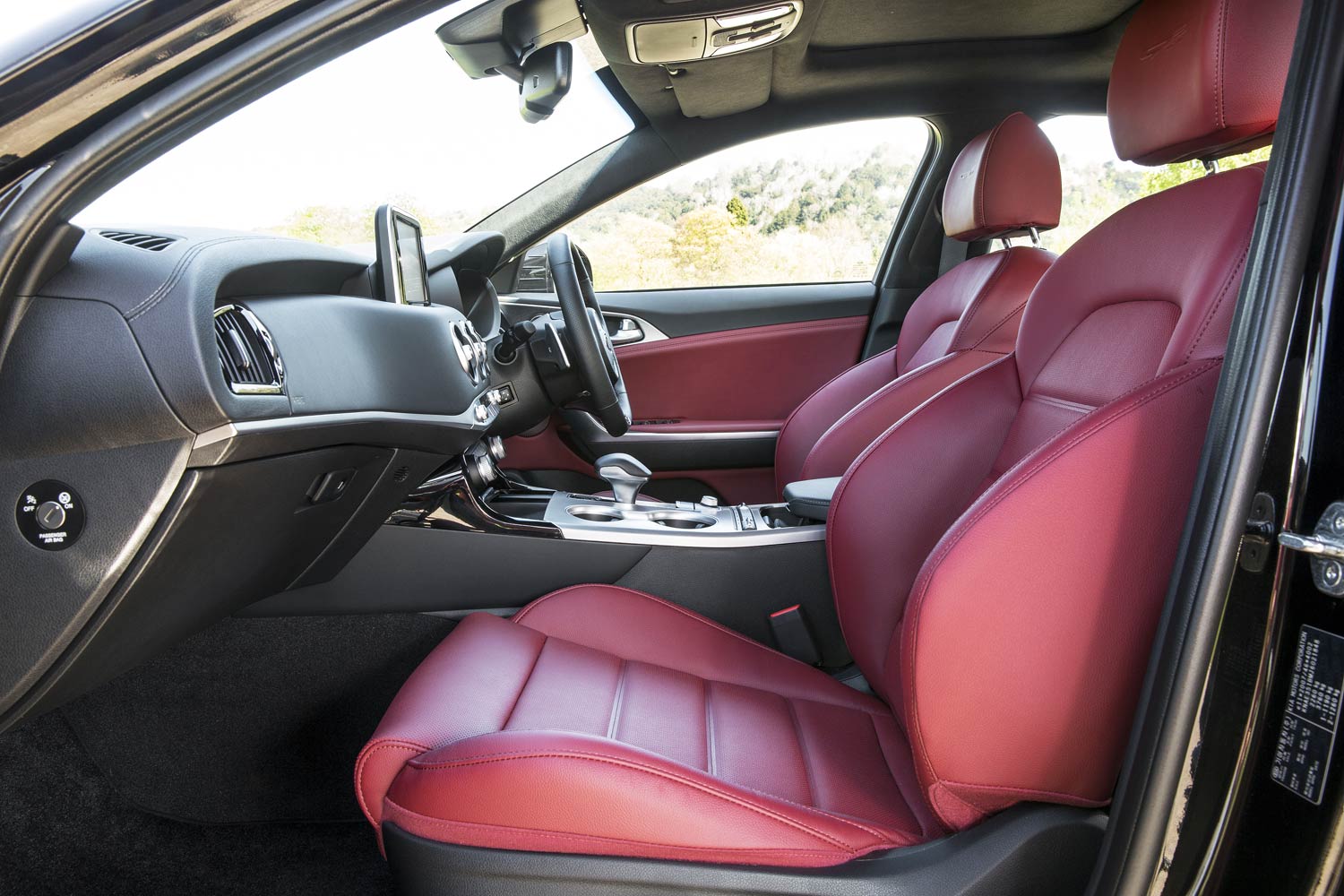 I’m impressed with the cosy and ergonomically cabin designed with its brushed aluminium console, satin chrome door handles, alloy pedals and stainless steel scuff plates. Very stylish. As I pull out onto the M23 heading south for Brighton, I feel the full force of the 5.8 seconds it takes to reach 60mph and beyond. The speed and power is exhilarating – as are the faces of several white van man drivers as I zoom past. The acceleration is especially impressive taking off from traffic lights. I just love the growl of the engines in Sport mode. If I close my eyes I could be at Silverstone…