Prime property prices in the cities monitored by the Prime Global Cities Index rose by 6.8% in the year to June 2011, the comparable figure a year earlier was 13.5%

Hong Kong, Singapore and Shanghai are the only locations, based on the latest available data, where the cities’ prime markets have not outperformed the mainstream housing market in the wider country or territory

London, Paris and St Petersburg are the only cities where prime property prices have reached their pre-recession peak. A number of the Asian cities tracked have yet to experience a decline during this cycle and continue to follow an upward trend

Government anti-inflationary measures being introduced in Asia are starting to impact. Singapore’s prime market has responded with slower price growth, but other cities are further behind in the deflationary cycle

Liam Bailey, Head of Residential Research at Knight Frank, comments: “One of the most noticeable outcomes from the recent global recession was the divergence between property performance in the mainstream markets (generally weak) and the prime or luxury markets (generally much better). The Knight Frank Prime Global Cities Index has tracked this process, which until recently seemed to be strengthening – with improving conditions in the luxury global city markets set against renewed price falls in the mass markets, especially in the US, the UK and most of Europe.

Our latest results confirm that annual price growth in prime city markets has slowed rapidly (from nearly 14% in Q2 2010 to barely 7% in Q2 2011). With growing concerns over sovereign debt and even for the outlook of the global economy, it seems likely that this process will continue – with still lower growth in the world’s prime city markets a likelihood. I think it would be wrong to become too fixated on the downside risks to the market we track in this index.

The fact is that prime residential markets have acted as ‘safe-havens’ for investors over the past two years – with growing demand for property in London, New York and other key global cities as economic and geo-political concerns have pushed investors to look for stable locations for their wealth.In these important global markets the biggest risks seem to be concentrated for the time being in Asia – with the ongoing process of managed market cooling being buffeted by rapid supply growth – the outcome of this process is likely to determine how healthy the Prime Global Cities Index is looking a year from now.”

Hong Kong has retaken its position at the top of our performance rankings partly due to strong annual growth of 16.1% and partly as a result of 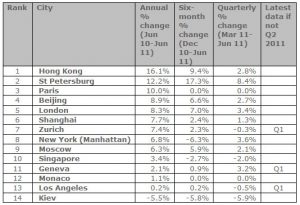 slower price growth in Paris, which topped the table last quarter. Despite the global financial crisis prime property prices in Hong Kong have followed an upward trend since Q4 2008, rising 75.9% over this period.

Asian cities appear to be responding to their governments’ regulatory measures to dampen price inflation, albeit at varying speeds. Singapore saw prime prices fall by 2% in the three months to June 2011 but Hong Kong, Beijing and Shanghai continued to record positive quarterly growth

Administrative measures such as new property taxes, restrictions on the number of property purchases and the promotion of subsidised housing have started to influence sales volumes in the key Asian cities but this has yet to feed through in a meaningful way on prices in several markets. We expect this will change in the second half of 2011.

Singapore’s slowing market, despite a rise in Chinese and Indonesian buyers in the last quarter, offers the first evidence that the Asian property market is moving into a new more negative phase. Concerns over the stability of the global economy, and in particular over EU and US debt, are causing uncertainty amongst Asian investors who have been pushing prices higher across the main cities over the past two years.

After a very strong year market conditions began to slow in Paris in the second quarter. Supply has increased in some of the most high-profile prime locations as vendors, particularly in the €4m to €5m price bracket, have taken advantage of the recent surge in prices. Interestingly foreign demand for Parisian property has remained healthy over recent months – with a number of new enquires from the Middle East and from Syrian buyers in particular.

Conditions in London’s prime market remain strong. Despite a recent rise in supply we expect prices to continue to grow in the second half of 2011, albeit at a slower pace. Offsetting rising supply has been the fact that buyer registrations have held steady and viewings have increased over the past two months.

Buyers in Monaco while facing lower prices than at their peak in Q3 2008, are still seeing asking prices of €40,000 to in excess of €50,000 per sq m for prime apartments, a reflection of the ongoing imbalance in the Principality between tight supply and cautious demand, that is nonetheless beginning to show the early signs of a more positive trend.

Both St Petersburg and Moscow have recorded positive annual growth since Q1 2010, with prime property prices in St Petersburg rising by 12.2% in the year to June 2011. Such strong price inflation is partly attributable to an improvement in economic and business sentiment in Russia since the start of 2011.