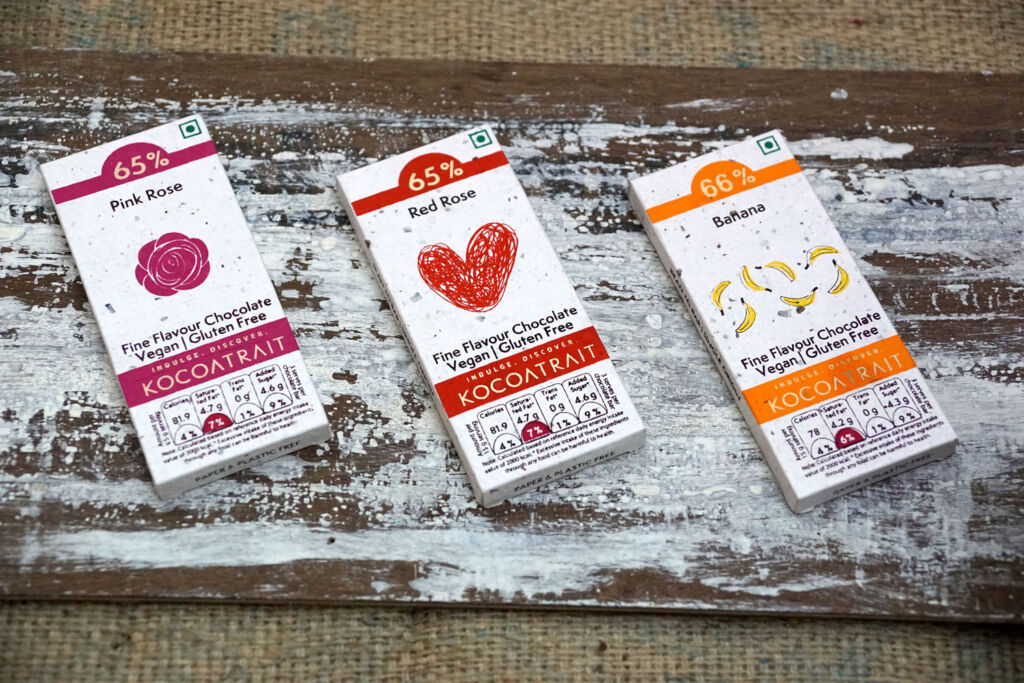 Zero Waste and sustainability are on most businesses minds; however, although many will say it is necessary, often it’s no more than hollow words. Kocoatrait is different; they’re setting a precedent by using one of the most innovative and sustainable ways to wrap their chocolate products.

Let’s be honest; almost everyone likes chocolate. Most of us will grab a bar, rip off the packaging and start munching away. However, you might be surprised to know that many wrappers on a chocolate bar can’t be recycled.

We’re quite sure many of you reading this will assume that the wrapping on a bar is a type of paper so it should be recyclable, right? Wrong! Most wrappers use a mixture of materials to make them shiny and glossy including polypropylene plastics. This makes them difficult, almost impossible to recycle, and even if they can be, the cost is far too prohibitive.

We’re not pointing the finger at any manufacturers, in particular, we’ll leave that to you. The next time you are in a supermarket, pick up one of your favourite treats and look at whether it states the packaging is recyclable, we’d bet that almost none of them do.

Some chocolate makers are adopting a more sustainable way to package their products, including compostable wrappers. However, Kocoatrait is truly raising the bar by using a material made from reclaimed cocoa husk to wrap their products. 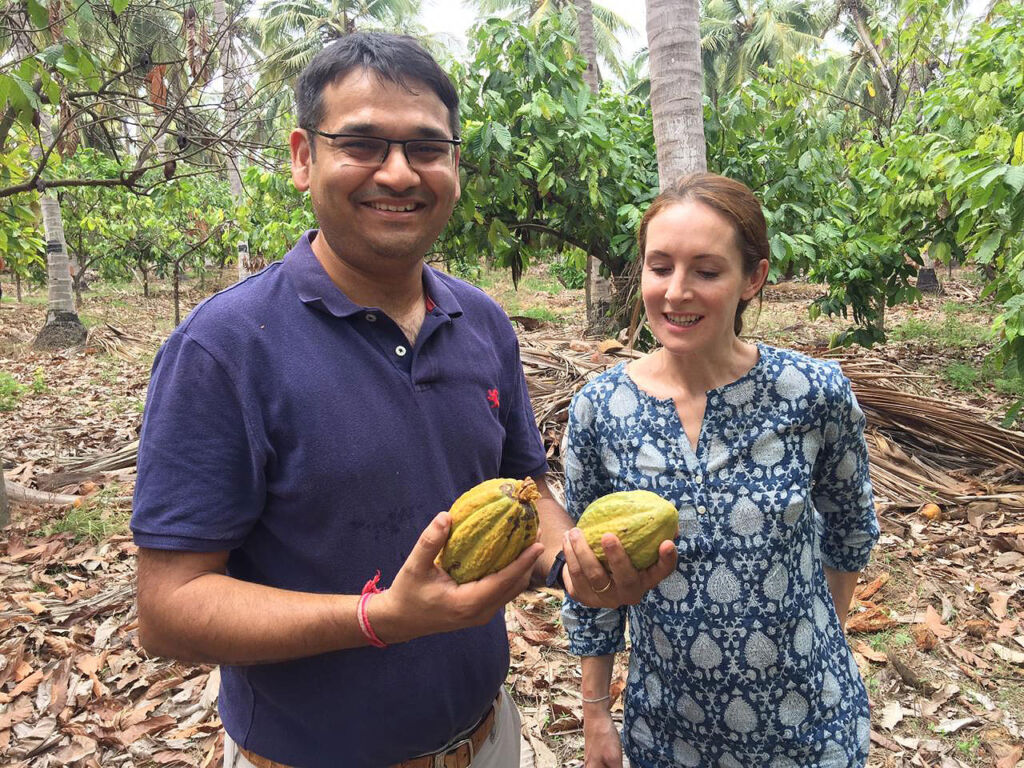 To highlight just how important it is to expect all confectionary manufactures move to sustainable, recyclable and compostable packaging. In 2019 Victor Vescovo, a former naval officer, made a record-setting dive into the depths of the Mariana Trench. This area is so deep, you can drop Mt. Everest into it, and you wouldn’t even know it was there.

This was an opportunity to discover new marine life, to help understand how our planet was formed and to theorise how life can survive on other planets with liquid surfaces with an absence of sunlight. Although Vescovo did find some new species, three to be precise, he also found a plastic bag and a sweet wrapper more than 11,000m below sea level!

Many manufacturers, when pushed for answers as to why they are still using non-recyclable wrapping, will try to deflect with over-used answers such as; “we’re employing people”, “we’re helping the community”. The sad fact is that many manufacturers are in it for themselves, and disappointingly that’s the world we live in.

Consumers also need to take some of the blame. You’ve probably heard the saying, “We eat with our eyes”, if something looks great, it will be picked up, popped into a basket and 99.9% of consumers won’t give a second thought to whether they’re contributing to the planet’s problems.

Most confectionery manufacturers just want to sell as many products as possible and make as much money as they can. So, they’ll cover a product with fancy designs, gold foil and glossy plastic lamination to make a consumer feel they are getting far more than they are paying. 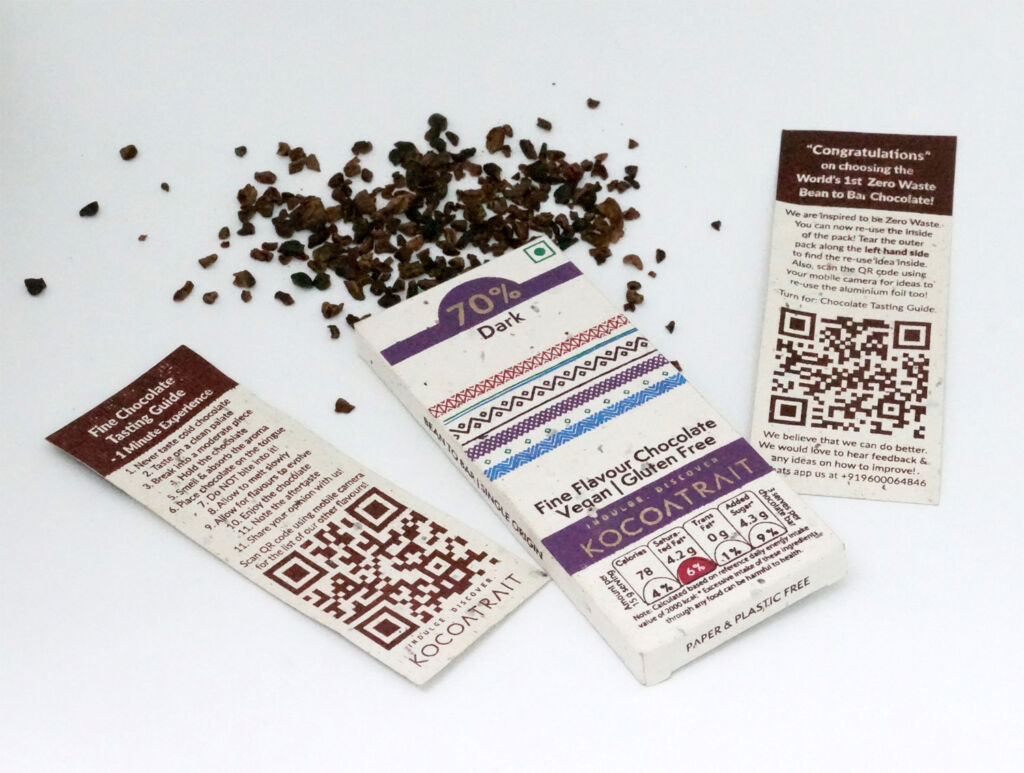 What separates Kocoatrait from the pack?
It’s rare, almost unheard of to find a company that operates under the mantra: People, Planet & Profit (in that order). Obviously, there are many companies out there that do adopt these words, but we can guarantee you, almost none of them will be in the same order.

This is one of the things that sets Kocoatrait apart from other companies. They put People and the Planet before Profit and are trying to lead by example.

As the world’s 1st Zero Waste and sustainable chocolate company, Kocoatrait follows a planet-friendly approach. Everything they do is guided by this, which has resulted in their unique approach to packaging. Their chocolates are wrapped in a material which is upcycled and made using reclaimed cocoa husk (from their own roasting process) and reclaimed cotton (from garment factories). 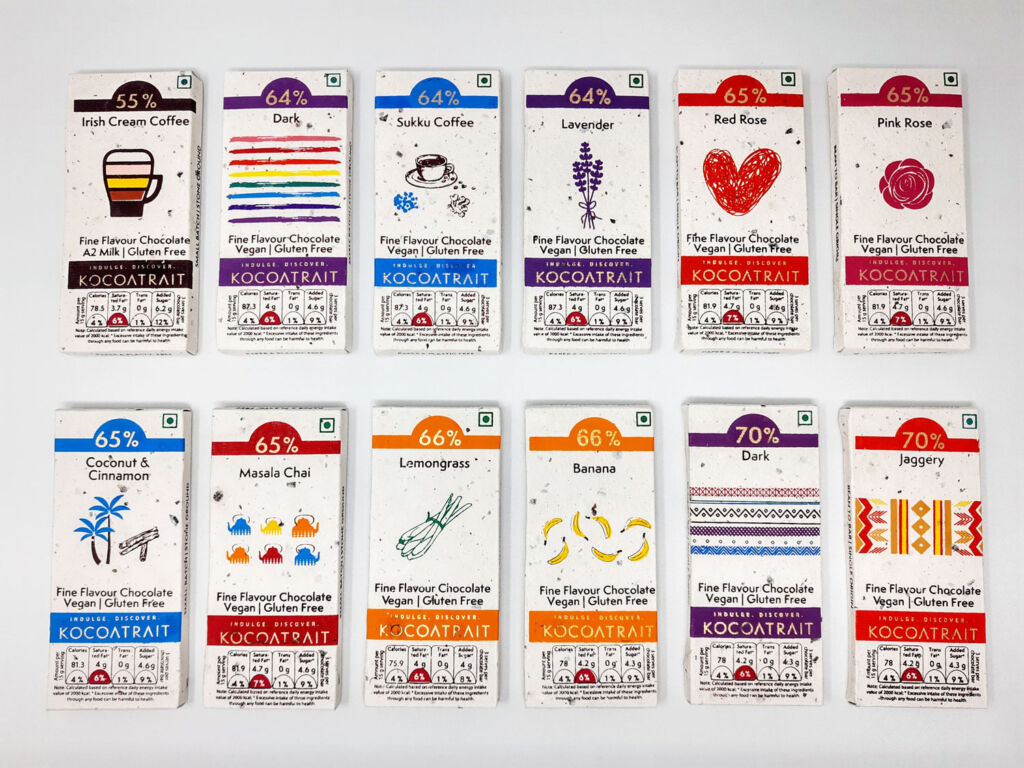 There are some drawbacks to using this material, namely the visual impact. Screen-printing has obvious limitations and one being you’ll never produce the most luxurious looking bar on the shelf. But, from the aspect of a consumer, there is a lot of satisfaction to be taken from buying something that you know is not harming the planet and won’t end up in the deepest depths of the oceans. 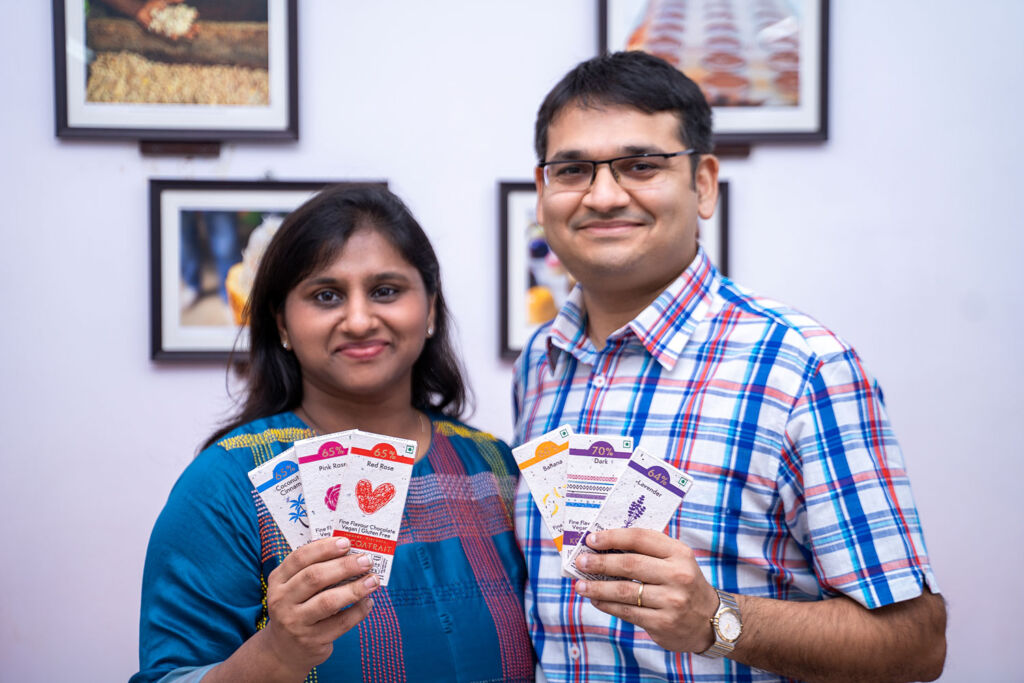 Poonam & L Nitin Chordia, founders of Kocoatrait know that this approach has its drawbacks, particularly to the businesses bottom line. However, they’re confident that consumers with a conscience will follow and appreciate their forward-thinking approach; “We launched Kocoatrait in Amsterdam in 2019 and were quite easily convinced that consumers are aiming to save the planet while making all kinds of purchases! Sustainable chocolates were just a missing piece.” 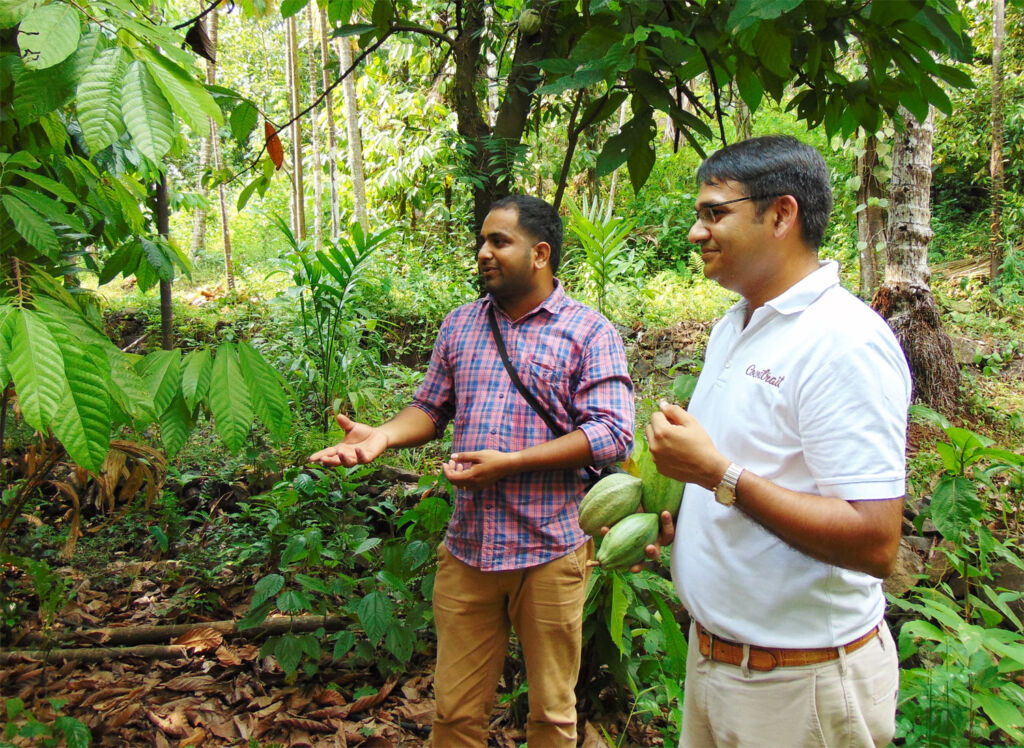 The philosophy Kocoatrait operates under is admirable and we can only hope that other companies will follow the fine example they are setting. If more businesses put the planet and people before profit, there’s no doubt that nature will reward us in its own unique way. Kocoatrait, we doff our caps to you!