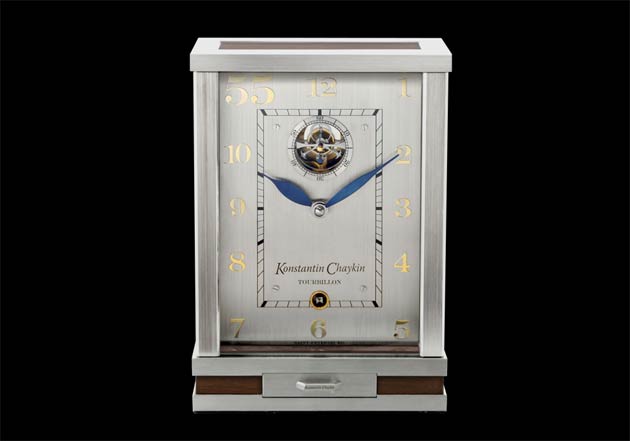 The main feature of the Konstantin Chaykin Tourbillon 55 is its one-minute “whirlwind”, which crowns the design of its gear train. Apart from illustrating the complexity of the movement, the one-minute tourbillon performs an additional function, replacing the seconds hand. The anchor is located inside a mobile platform containing the balance at its centre. It completes a full rotation around its axis in exactly one minute. The movement of the clock is composed of hundreds of miniature parts assembled with the help of a special microscope. This unique movement contains 11 jewels and 6 precision bearings held in place by rings with gilded collets and screw fastenings. Located on the drum of the spring is a device (in the shape of a Maltese cross) that limits the winding torque of the spring to enhance the accuracy of the movement’s operation. 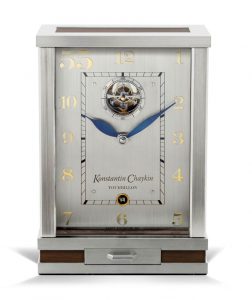 What’s more, this complex movement is only 15 cm tall. The case chosen to show the Konstantin Chaykin Tourbillon 55 in its best light is made from precious woods and nickel-plating brass Our fleeting, fast-paced and forward-moving lives are replete with numbers. Whether we realise it or not, we all depend on numbers. Everything that surrounds us on a daily basis can be traced back to a number: a date of birth, a ticket, a telephone or tramway number, the number of parking spaces, the pin code of a bank card, etc.

The number 5 is one of the most ancient, for it appeared in primitive society when primitive man had to count objects. The first numbers did not have names and were shown with the help of fingers: one set of five fingers equalled the number 5, two such sets equalled 10, etc.In numerology, numbers with two identical figures, such as 11, 22, 33, 44, 66, and so on, contain strong energy, which has a particular influence on the life of the person with whom they are associated. The number 55 is considered to possess powerful male energy. Priests in Ancient Babylon saw a combination of two energies in this number: the beginning of everything and its destruction. A person associated with the number 55 will destroy all the enemies in his way. In the Chinese Book of Changes, the 55th hexagram symbolises abundance and the start of a very successful, productive and stable period in life.