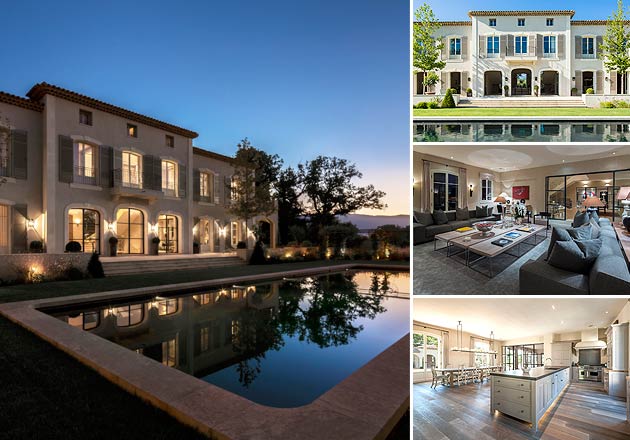 October descends upon Britain each year as a harbinger of seasonal doom, the last prospects of fine weather all but disappearing across the horizon. In southern Europe, of course, the summers twilight persists a little longer, affording us time to nip over to the mainland for a final blast of meaningful heat.

It was in this spirit of sun seeking that we arrived at Nice airport, the cloudless morning sky causing us to scurry off our plane like parched pilgrims happening upon a watering well in the middle of a desert. Dignified it was not, but then Brits abroad are not known for their decorum. One thing was certain: the melodrama would need to be turned down several notches before we reached what would be our home for the weekend. It was less than an hours drive from the southern French coast to the hillside village of Tourrettes, and we could only hope it was long enough to affect something close to propriety.

Our final destination was La Bergerie, a rebuilt 17th century villa situated within the exclusive Terre Blanche Golf & Spa resort, close to the historic perched villages of Fayence, Seillans and Caillian. More accustomed to hosting glamorous aristos seeking respite from the bustling Riviera than a motley crew of excitable, pasty faced Brits, as we passed through its imposing double height entrance gates in our modest hire car, the sense of incongruity was mutual.

Following our invitation to stay at La Bergerie, we had spent hours poring over the online photos, debating whether it could possibly be as beautiful as the pictures suggest. Now, standing inside the vast reception area, flanked by elegant, winding staircases leading up to six en suite bedrooms, our doubts were answered. No smoke and mirrors are needed to present La Bergerie in its unvarnished glory.

We were shown upstairs by Genevieve, who has overseen operations at La Bergerie since its completion in May 2012, and asked to choose our rooms. I quickly claimed the Master, though in truth there is little to choose between them, each boasting a large terrace or balcony, ultra comfy beds, beautiful linens and state of the art electronics. The bathrooms are equally luxurious, featuring marble and slate finishing, a free standing bath tub and rain head shower. Back downstairs, we were treated to a champagne reception in the huge open kitchen and dining area. With its mix of reclaimed antiques, fine art and contemporary fittings, the room exemplifies the attention to detail that has gone into the villas interior design. A stylish twelve place dining table, where we would later enjoy a gourmet three course meal created by the on site chef in a separate side kitchen, sits as the rooms centrepiece. But first, there was La Bergerie’s great outdoors to explore.