Le Clarence has just been named one of the top 50 world’s best restaurants following an award ceremony this summer. Sabi Phagura dined there a few weeks ago and can vouch for its exquisite cuisine. Here she shares her experience at the restaurant and a hopping visit to Saint-Émilion to learn about the history of Château Quintus, owned by the Dillon family. 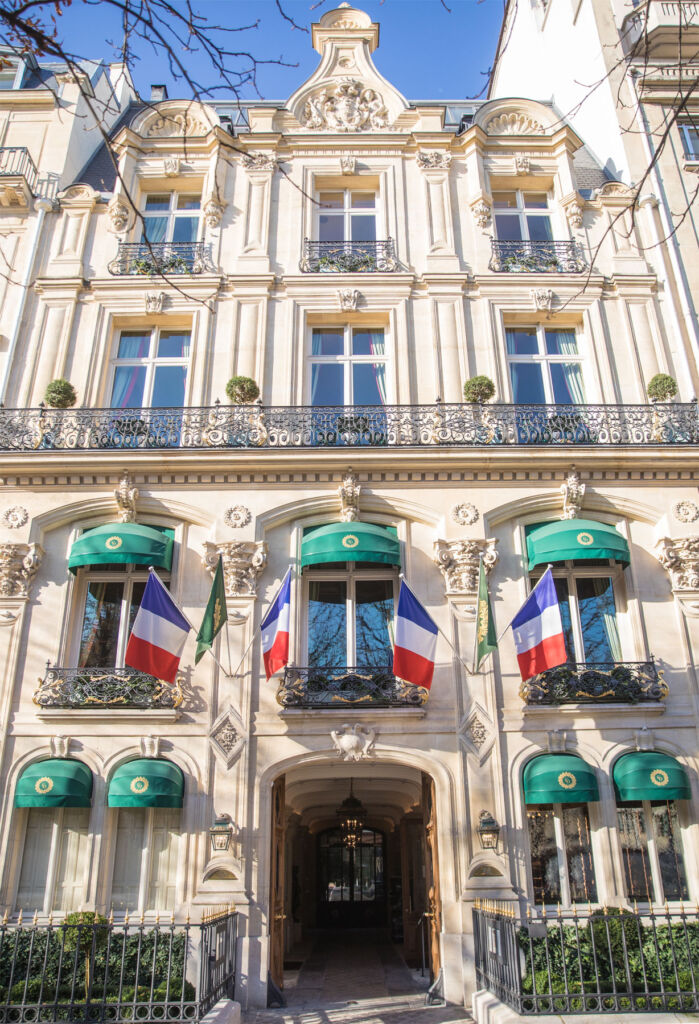 If you didn’t know what you were looking for, you could easily miss Le Clarence. The restaurant, set only a few meters from the world’s most famous avenue, the Champ Elysees in Paris, stands discreetly amidst other townhouses.

When HRH Prince Robert of Luxembourg bought it, the place was a wreck; you could even say a total shamble. However, the bones and structure were good, and with time and care, the property was coaxed back to life, to its former glory.

The Dillon family’s legacy in food and wines began with Clarence Dillon, who in 1901 had been one of the earliest students to take classes at the Cordon Bleu Cooking School in Paris. He became obsessed with his produce from the onset, most of which was grown on his farm.

It was always his ambition to open a restaurant, but he never had the opportunity to do so. So when his great-grandson Prince Robert learned of this, he decided to open a restaurant as a legacy to him. And thus, in 2015, Le Clarence was born and named after him.

Seven years on, Domaine Clarence Dillon is an expression of French luxury from a long-gone era. There is none of the old meets new atmosphere here. Instead, it simply gives guests the feeling of having stepped into the good old Parisian days. The colours of Le Clarence are classic – the red of the wine, the green of the vines and the brown of the leather. And as our group entered the magnificent building and began to ascend the grand sweeping spiral staircase leading to the dining rooms, we knew we were heading on a voyage towards ultimate luxury. 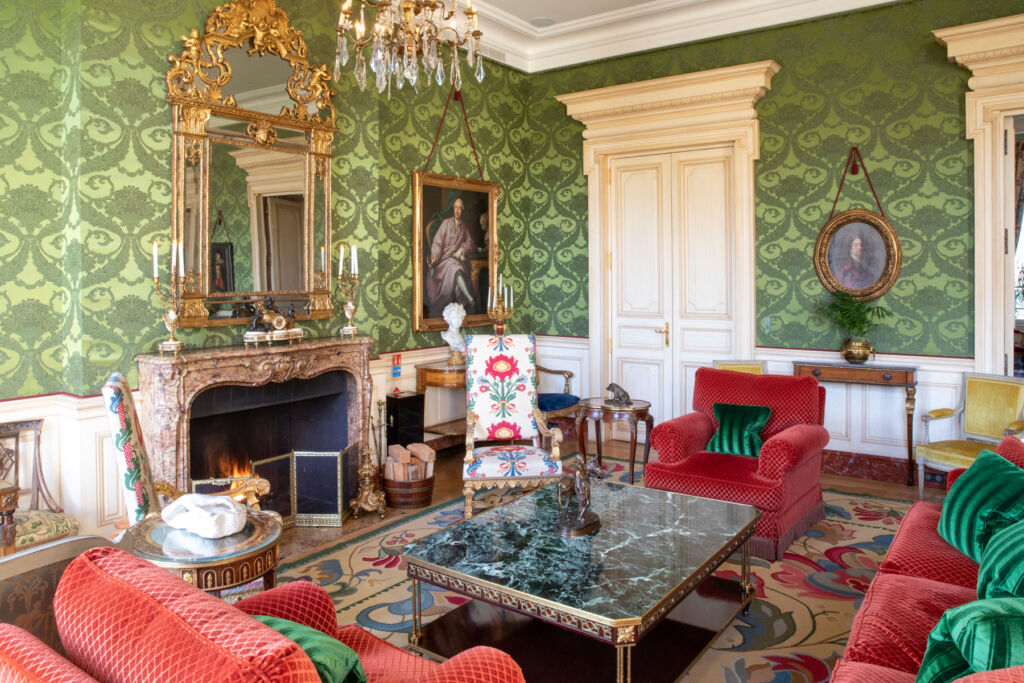 Our experience at the ‘Hotel Particulier’ (private mansion) began with a crisp glass of champagne with canapes to match. Regardless of being beautifully presented, I chose to bypass the whelk, which my colleagues were cooing over. However, I did indulge in the other canapés on offer to fire up my appetite after the journey from London aboard the Eurostar.

I often check out menus online ahead of a restaurant visit, but it wasn’t possible on this occasion. Le Clarence doesn’t have a menu. Instead, Chef Christophe Pele likes to surprise diners with an array of satellite dishes concocted by what is available in the kitchen on the day. 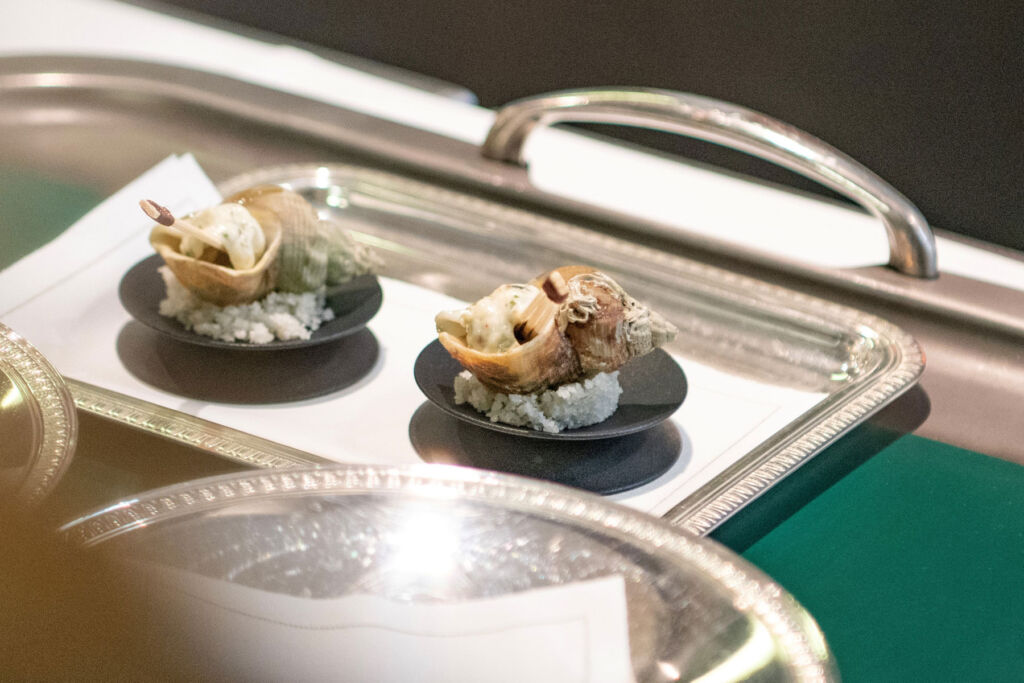 Suffice to say, no two visits here are the same. What he does like to do, however, is give diners pointed, sharp and stunningly presented dishes served in ‘sequences.’ Diners can choose from menus of three, five or seven sequences but will receive five, ten or 11 dishes for each course, and that’s not taking into account the four or five dishes that make up the dessert.

Often, they are grouped around the main ingredient and brought out in a staggered fashion. Such is the spontaneity of this place that it left my colleagues and me delighted and disoriented simultaneously. 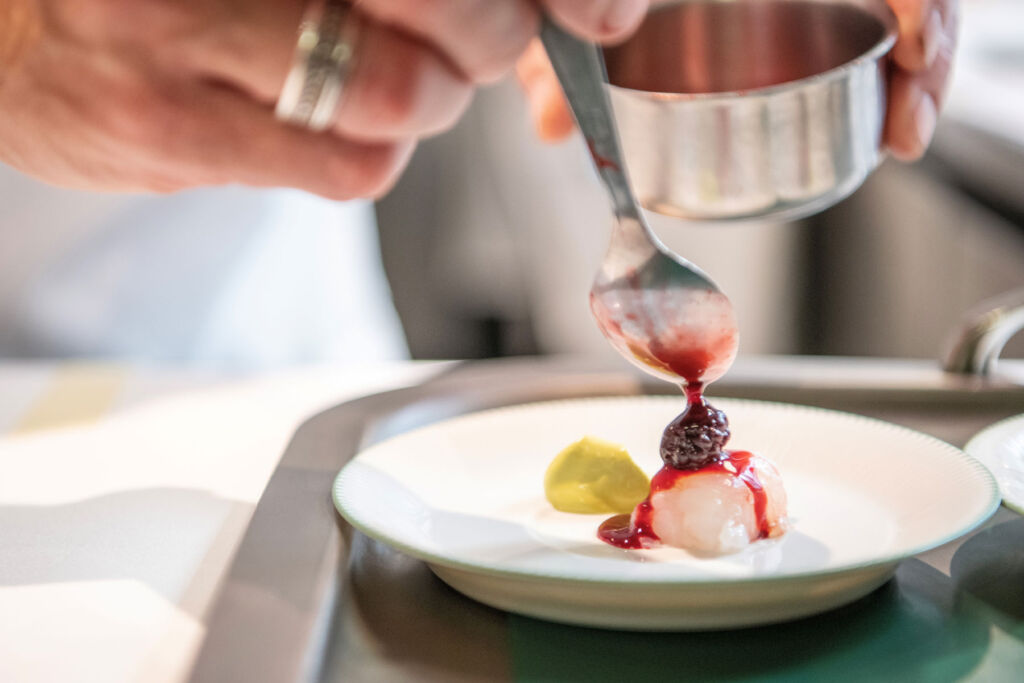 The dishes were delightful, tasty, full of flavour and presented beautifully. While I tried to keep tabs on the number of ‘sequences’ I had, it was impossible to keep up. It was the ultimate gastronomical experience, nothing like I had before. Unsurprisingly, Le Clarence was awarded two stars by the famous Michelin Star just two years after opening, and on the 18th of July this year, it was ranked 28th World’s Best Restaurant.

As for the vino, I wouldn’t have expected anything less. Throughout the meal, wines were paired and poured accordingly in orchestrated fashion by the waiting staff, brought to the table from the cellar in the basement. 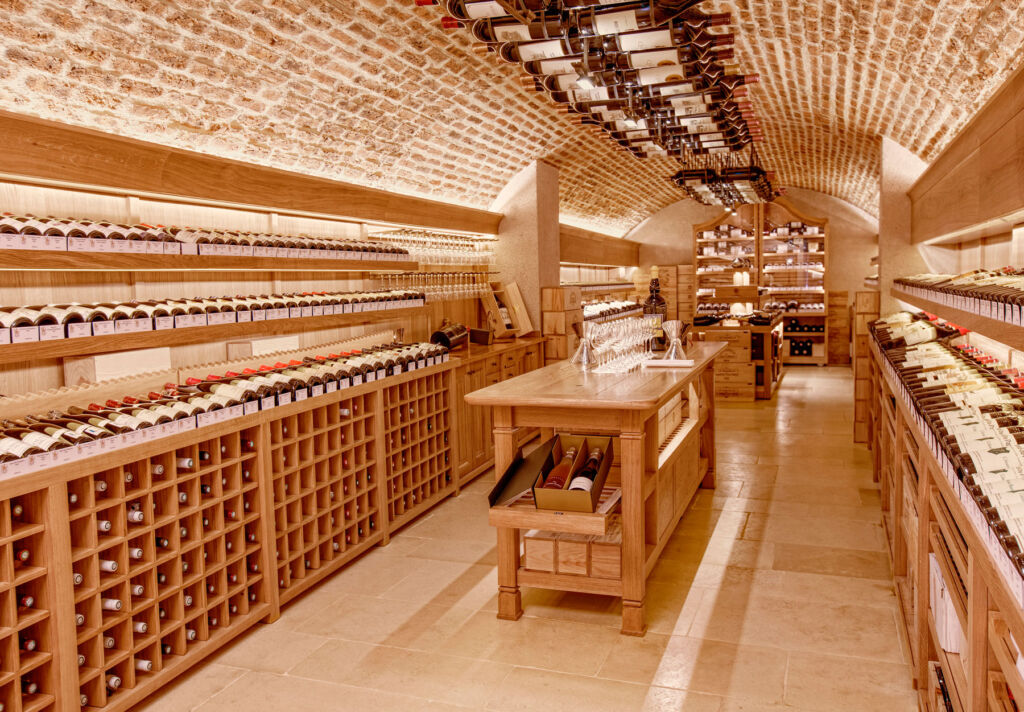 ‘La Cave du Chateau’, or wine cellar on the premises, is home to an impressive collection of wines in both normal and extra-large bottles. When initial planning began, this area was earmarked as office space. But as workers started peeling back the premises, the owner decided the space would be better suited to house the wines. Just as well. The building, alongside the rest of the mansion, is a marvel in itself and is better suited to show off the array of wine bottles rather than be morphed by office documents.

The temperature in this brick-exposed oasis is perfect for housing the wines that elegantly line the walls and racks overhead. The list has been carefully compiled to ally the most prestigious labels with the smallest productions.

Today more than 250 estates from all regions of France are represented in the wine list. The wines, as one would expect, aren’t cheap, with the most expensive bottle retailing at £27,000 dating from 1989. Anyone wishing to purchase one of those would have some serious celebrating to do, along with a very refined palate. 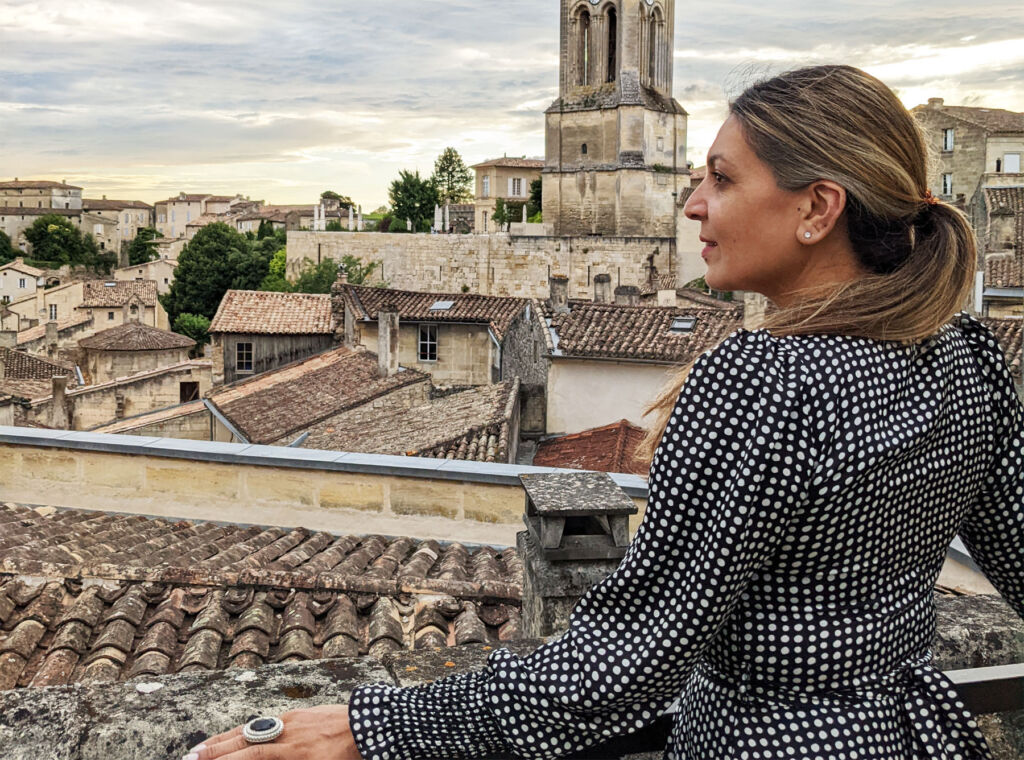 Following our four-hour lunch, it was time to head to Saint Émilion, where two millennia of history between men and wines awaited us. This charming medieval village nestled in the heart of the Bordeaux wine region is home to world-famous wineries, among some of the most beautiful architecture. Saint-Émilion, previously called Ascumbas, was renamed after the Breton monk Émilio from Brittany, who fled Vannes, seeking refuge in one of the natural caves of the region in the 8th century.

The monks who followed him started up commercial wine production after realising that Saint-Émilion’s soil and microclimate would lend themselves to producing the best wine The terroirs, with 360-degree views on the south-western slopes of the famous limestone plateau, provide ideal conditions for the maturity of the different grape varieties. Saint-Émilion became the first UNESCO-listed vineyard in 1999. 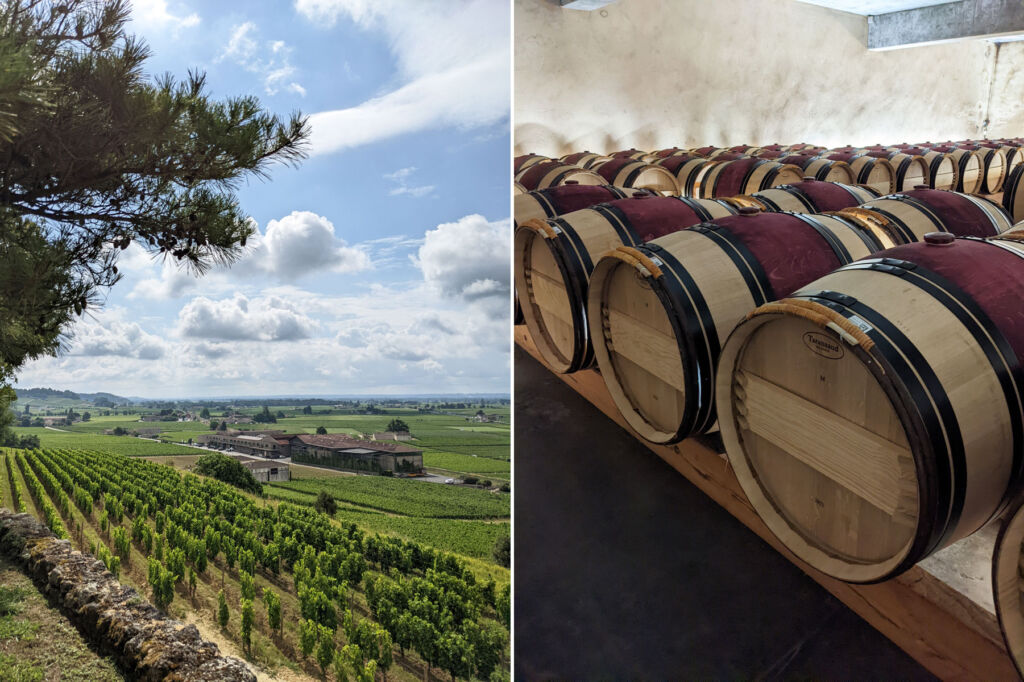 But it wasn’t until 2011 that Domaine Clarence Dillon extended its wine portfolio with the purchase of a property in Saint-Émilion, now renamed Château Quintus. In 2013, Château Quintus made the acquisition of another neighbouring property, followed by a third in 2021.

The trio comprise a wine estate of 45 hectares, producing one of Saint-Émilion’s finest wines. The Gallo-Romans, creators of the vineyards of Saint-Emilion, had the custom of naming their fifth child Quintus. Paying homage to its predecessors, Domaine Clarence Dillon renamed this estate, Château Quintus.

There are many notable wines produced here by the Le Clarence family, but the one we focused on was Château Quintus. During a tasting session, Jean-Philippe Delmas, the Executive Managing Director, took us on a sensory journey of wine expressions from 2017, 2018 and 2019. He informed us that much depends on the season, and so strictly speaking, the vintages can taste ever so slightly different from year to year.

I’m no wine connoisseur, but even I could tell there was a difference in taste and soon got involved in the group’s chatter about what taste differences I could detect. Still, I’m no expert, and I allowed Jean-Philippe to further enlighten us. 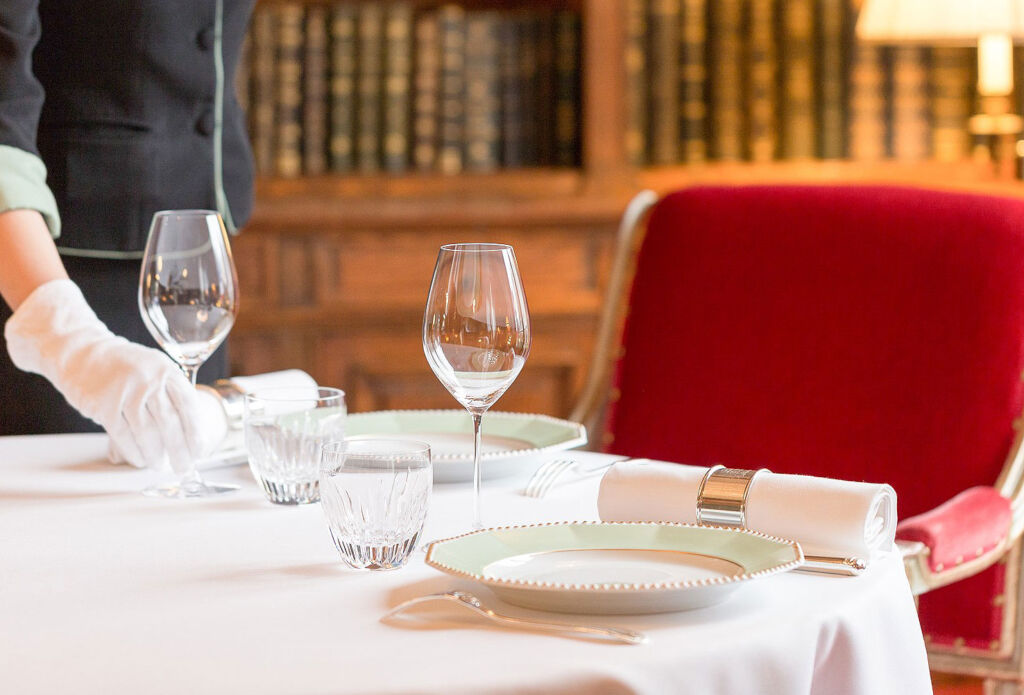 This wine, he told us, takes its natural place alongside the red and whites of Château Haut-Brion and Château La Maison. The first Château Quintus was produced in 2011. Containing mainly Merlot Noir with a little Cabernet Franc, you initially get the riper red and black fruit aromas from the moment the bottle is opened.

Once sipped, it then develops into a long finish with a decent amount of flavour. With the viticulture and winemaking at Quintus all under the control of the Haut-Brion team, it’s not surprising to see Quintus quickly gaining its own following of collectors. It sits alongside the Grand Vin, Le Dragon de Quintus (first produced in 2011) and Saint-Emilion de Quintus (first produced in 2014).

It’s easy to see the Le Clarence family have a nose and taste for good food and wine, and Clarence Dillon’s legacy continues to this day. Clarence Dillon never got around to buying this Château on the right bank, but sixty-five years later, in 2011, his great-grandson, Prince Robert, realised his dream by purchasing the Château Quintus property.

Where the family goes from here is anyone’s guess, but one thing is for sure. Quintus is still a new adventure for the Dillon family, and there is plenty of potential to emerge from this wonderful terroir.

Domaine Clarence Dillon – Where and How?