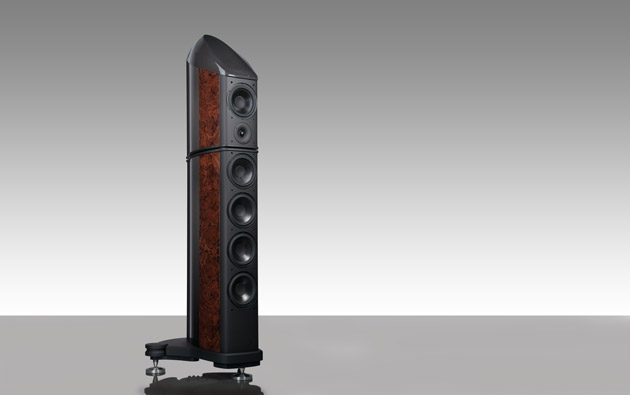 Powered by eighteen highly-optimised WB Drive units and standing at over 6-feet tall, the Cardinal represents the very cutting edge of British Design and a new level in terms of consumer HIFI products.

The Cardinal loudspeaker, which retails in the UK for £54,950, will be hand built entirely in-house at the company’s headquarters in Sheffield, South Yorkshire.

Wilson Benesch has a passionate commitment to music and innovation. Formed in 1989, the company now has over two-decades of experience in audio design and manufacturing.

Craig Milnes, Wilson Benesch’s Design Director said: “The use of Advanced Materials Technology is a unqiue symbol of excellence that has defined the brand, setting it apart from every other audio company in the world. The performance and aesthetic of the Cardinal is the finest example of that excellence and is a tribute to significant re-investment that we have made in research and development.”

The Cardinal’s form and geometry is instantly recognisable as a Wilson Benesch design incorporating accents that have evolved from many predecessors including the A.C.T. One and the Chimera – but with a 65% larger internal air volume and entirely proprietary Wilson Benesch drive technologies the performance of the speaker will be class leading.

Thanks to the mid-range and bass Tactic-II drive units and the Semisphere Tweeter, the dynamics and transient response of the Cardinal are second to none. Whilst the A.C.T. monocoque, which consists predominantly of carbon fibre, affords the design levels of stiffness and damping performance that cannot be found from traditional cabinet materials. As a result cabinet borne resonances which can color the sound are dissipated before they become a problem, affording the Cardinal an industry leading signal to noise ratio.

Wilson Benesch’s Cardinal will be supplied in the UK via a small network of highly specialised dealers and will launch at the Bristol Sound & Vision HIFI Exhibition in February 2013.