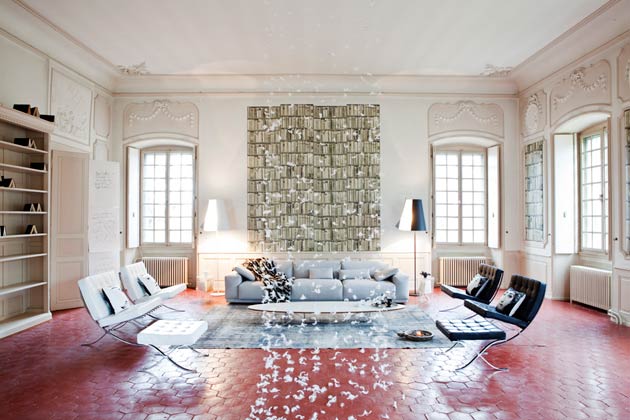 The award was presented at the Maison et Objet fair in Paris 2012. The award winning project, The Wing and its Feathers, is a dreamy evocation that leads us to an encounter with the ghost of Delphine Seyrig in the corridors of a fabulous castle.

A Prestigious International Prize
The International Interior Design Association (IIDA) has announced the winners of the second edition of the Global Excellence Awards, an international interior architecture competition that acknowledges the best design projects throughout the world. The winners were chosen from among 92 architecture studios from 32 countries around the world. BMW Group DesignworksUSA is the competition’s official partner and its chairman was one of the members of the jury.

The award winning architects in the different categories were presented with their awards during the ceremony which took place at the Maison et Objet fair in Paris 2012.

The Wing and its Feathers, an award winning poetical project 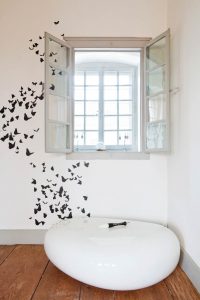 The main source of inspiration of Jorge Cañete’s project is the very same place in which it is to be found: the wing of an 18th century castle with its infinite possible evocations, such as, for example, the wings of a butterfly or of a bird. Through semantic displacement the wing also evokes feathers, not just birds’ wings but also plumes we would impregnate in ink to write words. It is then that the calligraphic strokes also begin to take off. Texts and letters act as a leitmotiv to the decoration of the different rooms of the castle: poems line the walls, acronyms cover the seats, and the sheets on a bed sport printed phrases.

In order to materialize yet further the double meaning of the word “plume”, a meticulous selection of contemporary works of art was made so that they would occupy the different quarters of the residence: a monumental installation by the French artist Isa Barbier made of suspended feathers, the “books-birds”, Mes amis, by Swiss plastic artist Peter Wüthrich, perched on the shelves of the great library, a painting in the shape of a poem by English artist Robert Montgomery or even the “photographic texts” by the Barilla couple.

Like all castles, this one is also haunted. In this project, the elegance of the enchanted fairy Delphine Seyrig with her little touches inhabits the rooms of the residence. The duality of her gaze in the bedroom and the white feathers placed on the chairs, which remind one of the Chanel dresses she wore in the film Last Year in Marienbad, are like little pebbles that secretly reveal her passage.

A phrase taken from the script by Alain Robbe-Grillet could wonderfully summarize this award winning project: “Once memory is let in, there is no difficulty in admitting the imaginary…” 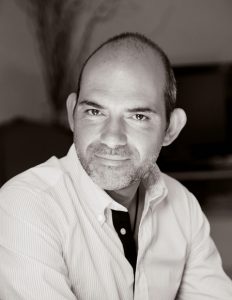 A Genevan of Catalan and Andalusian origin, Jorge Cañete did not choose to devote his life to interior design and architecture by chance. Following a career in luxury products which sharpened his sense of items of beauty (Ungaro, Bvlgari, Mugler), he decided to express his creativity in 3D through interior design.

A diploma in “Interior Design” by the London Metropolitan University and several architectural projects at architecture studios in Rome and Geneva served as his launch pad allowing him to settle in Switzerland, and, some years later, to set up his own studio: Interior Design Philosophy.

Success did not take long in coming: prestigious brands and his own private clientele commissioned him to decorate their universe with his characteristic philosophy: to materialize an emotion that comes from within via a poetical vision of the world. His ultra-personalized approach suggests creating projects that are inspired by the environment, by the place itself, as well as the client’s personality. In doing so, the resultant of the equation of these three sources of inspiration is unique and coherent every time.

His work has been published in numerous magazines and in the prestigious book “International Interior Design Review” by Andrew Martin, in four consecutive years (2009, 2010, 2011 & 2012). Each year, this work brings together a selection of the most prominent current designers and it is considered by the profession as being the international “bible” of interior architecture.

Each reward and publication is the perfect excuse to celebrate by giving carte blanche to an artist he particularly appreciates. When it comes to exhibitions, he transforms into the curator and proposes singular spaces in which to highlight their works to artists with whom he shares a passion for writing.

After photographer Cesare Bedognè, Swiss plastic artist Peter Wüthrich, it is the artist from Marseille, Isa Barbier who in June exhibited more than 30 works realized for this occasion in the sleepy wing of an 18th century château, reopened after years of drowsiness. These artistic collaborations have given rise to e-books (available at iBookstore), immortalizing these exhibitions of contemporary art. The profits made from the sale of these works are exclusively donated to a charitable trust working to fight against illiteracy.