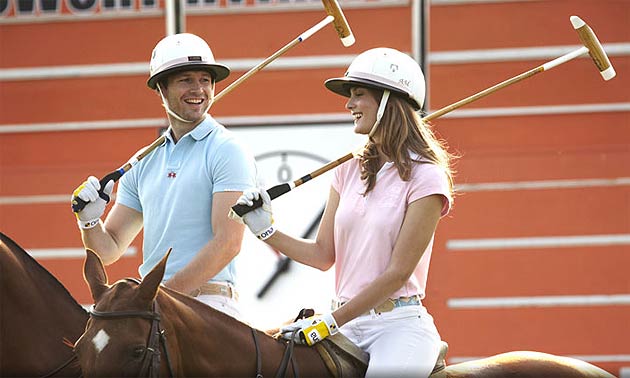 This academy will give guests of the Berkshire based hotel, Coworth Park, the opportunity to learn and train with one of Britain’s most experienced players alongside playing members of the world’s most famous polo club.  With numerous victories around the world, Andrew is the only player to have both captained and managed the English national team, which is now based at Coworth Park. Additionally he coaches the award-winning, high-goal team Zacara, winners of the British Open Championship in 2011.

Andrew Hine commented: “I am delighted to be bringing my academy to Coworth Park. Polo is one of the very few sports where players can enjoy all the best elements of activity simultaneously: adrenalin, contact, teamwork and coordination skills – continuously heightened by the speed, strength and agility of the pony.”

Andrew Hine has played in 26 countries around the world throughout his professional polo career. He turned pro in 1989 and has won the sport’s leading tournaments, including victories in the Queen’s Cup, Gold Cup, Westchester Cup and Coronation Cup. He captained the England Polo team for many years and retains his links with the HPA’s England squad through his role as England team manager.  In 2011 he managed the Zacara team, helping them to win the British Open Championship and will be managing Lyndon Lea’s team again in the high-goal competitions in the UK in 2012.

Zoe Jenkins, general manager of Coworth Park, commented: “We are thrilled to be building on the hotel’s unique polo offering in the United Kingdom, providing the best experiences for our guests and introducing this exhilarating and cosmopolitan sport to a new audience.”

Neil Hobday, chief executive of Guards Polo Club said: “The creation of ‘Guards Polo Academy at Coworth Park’ will enable us to provide a complete package to our members – offering them the best fixture list, the best Club facilities and now the best training.”

In addition to offering the very highest polo tuition to members of Guards Polo Club, Andrew and his team of leading polo coaches will introduce this ever more accessible and popular sport to non-players through the Academy’s corporate and private leisure experiences, allowing polo enthusiasts of all levels to truly get a taste for the game.

Andrew Hine’s ‘Guards Polo Academy at Coworth Park’ offers a wide variety of lessons and polo days. An hour-long private lesson can be booked from £145, with a course of 5 lessons from £675, while group lessons (3 people or more) cost from £135 per person.  Andrew and his team also offer half and full day Discover Polo experiences, or alternatively can arrange bespoke polo experiences for individual clients. Instructional chukkas are available for the more serious player, as is chukka hire. The England team manager also provides a three-day elite polo academy which costs £1,595 per person.  Preferential rates are offered for guests of Coworth Park and Guards Polo Club members.