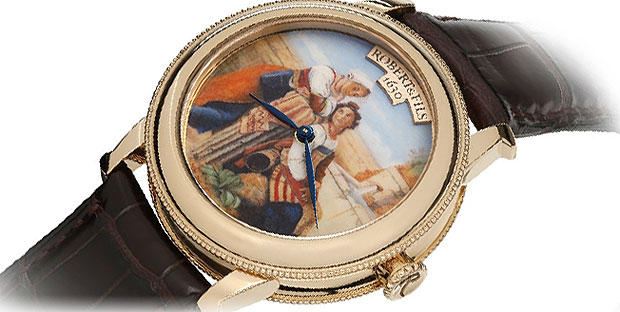 The Two Young Girls at the Fountain watch, this is the sixth unique piece in the Leopold Robert Collection from Robert & Fils 1630. 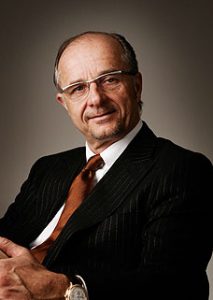 Robert & Fils 1630 enjoy what is probably the longest watchmaking tradition in the world. Over nearly 400 years, the Robert family has designed  hundreds of mechanical  movements for the watchmaking industry. Abram Robert, appointed by the municipal authorities in Le Locle to look after the town clock back in 1630, has gone down as one of the first horologists in Swiss history. In 1725 Josué Robert was named Horloger du Roi by King  Friedrich Wilhelm I of Prussia. Barely a century later, Jacob Robert became the veritable founder of the world’s oldest manufacture of watch movements – whose ownership, then management, remained with his descendants
until 1981.

As heir to this amazing heritage, Gilles Robert – who represents the 11th generation of the Robert family – decided to revive this unique watchmaking tradition in 2002, by creating exclusive timepieces in classic contemporary style. Each Robert & Fils 1630 watch is made using “Robert” calibres entirely restored by hand, in line with Swiss watchmaking tradition. Inspired by the Robert family’s artistic heritage – which includes the paintings of Léopold Robert (1794-1835), visible in museums around the world – the timepieces designed by the brand are either unique, or edited in very limited series.

The Two Young Girls at the Fountain watch 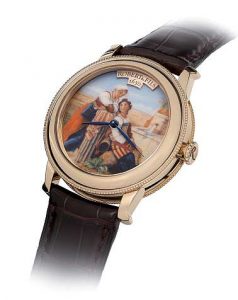 For this new timekeeper, Robert & Fils 1630 drew inspiration from one of the paintings by the famous Swiss painter, Léopold Robert, entitled Two Young Girls at the Fountain. Crafted in grand feu enamel with miniature painting, the dial displays the hours and minutes. The Two Young Girls at the Fountain watch is driven by an automatic mechanical movement from the years 1960 to 1970, which has been reworked in the spirit of the Geneva Seal – the Robert Calibre. Designed on five levels, it features an oscillating weight in 22K rose gold. The 18K rose gold case is mounted on a hand-sewn alligator leather strap with a tongued buckle in 18K rose gold engraved with the Robert & Fils 1630 logo.

After the great success of the first five unique timepieces in the Léopold Robert Collection – The Musicians in 2008, The Idyll in 2009, The Young Girl and the Fisherman in 2010, and The Brigand’s Rest in 2011, the creation in 2012 is inspired by the painting entitled Two Young Girls at the Fountain. Painted by the Swiss artist, Léopold Robert (1794-1835), in Rome in 1827, it now hangs in the Museum of Fine Arts in La Chaux-de-Fonds. Gilles Robert explains this choice by the feeling generated by this work of art, reminding him of the Campo de’ Fiori and the Trastevere, two neighbourhoods in Rome that he loves. For many years during his frequent visits to the Eternal City, he walked these neighbourhoods for hours at a time, and learned Italian to better absorb their culture. During this time, the jeweller Bvlgari awakened and affirmed his artistic sense. In his position as general manager of the high jewellery division, Gilles Robert learned and applied authentic artisanal methods combined with artistic skills. 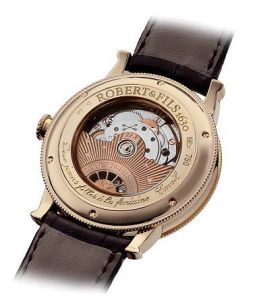 The museum in La Chaux-de-Fonds loaned Two Young Girls at the Fountain to Gilles Robert so that he could display the painting at his stand at BaselWorld 2012 next to the watch of the same name, thus letting the visitor absorb the romantic poetry evoked by Léopold Robert’s work of art.

The Two Young Girls at the Fountain watch’s gold dial features the difficult technique of miniature painting in grand feu enamel, realized by hand. Connoisseurs will certainly be touched by the movement – an automatic mechanical Robert Calibre. Produced during the years 1960 to 1970 by the Fabrique d’Horlogerie of Fontainemelon, it has been entirely dismantled, checked, decorated, and tested in 2012. It is a direct descendant, in the purest tradition of timekeeping art, of one of the oldest movement manufacturers in Switzerland, formerly called Robert et Cie. The calibre of grand “anchor” watchmaking has been decorated, chamfered, circulargrained, brushed, engraved, and polished by hand in 2012 in the spirit of the Geneva Seal. It features a 22K rose gold oscillating weight to ensure the highest performance of this automatic movement.

An exceptional piece like the Two Young Girls at the Fountain watch deserves an exceptional final packaging. The piece comes in a case in the form of an antique book with the gilded title Robert & Fils 1630. Also included are the two-year guarantee brochure and the instruction manual, printed on artisanal paper, both hand signed and sealed – as for the previous models in the Léopold Robert Collection.

All component parts used on the Two Young Girls at the Fountain watch have been made in Switzerland.