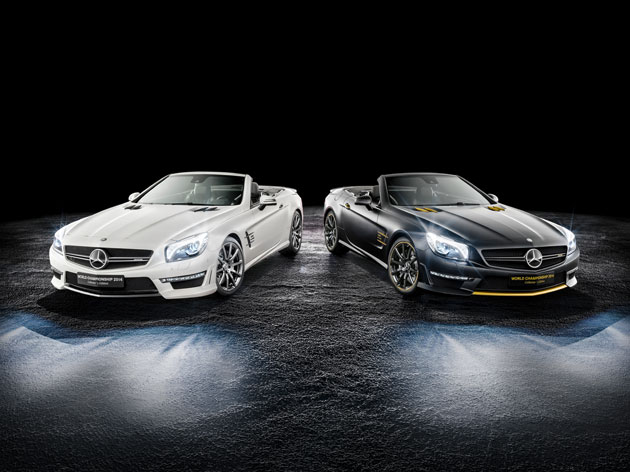 Mercedes-Benz is celebrating its triumph in the Formula 1 World Championship with two exquisite special models of the SL 63 AMG – co-created by Lewis Hamilton and Nico Rosberg. 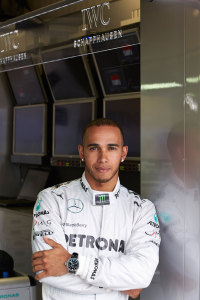 Lewis Hamilton, who became the Formula 1 champion for the 2014 season after a series of memorable duels, proposed black as his base colour. Nico Rosberg, his fiercest rival in this season’s races, chose white as his colour theme. Mercedes-Benz is only producing 19 of each model. And each model in the “World Championship 2014 Collector’s Edition” is effectively one-of-a-kind: for each individual vehicle is dedicated to one of the 19 Formula 1 race tracks used this year and is unmistakeably identifiable as such through some of its equipment and appointment details.

World champion and serial winner: the two Mercedes Formula 1 drivers Lewis Hamilton and Nico Rosberg were first through the chequered flag in 16 out of the 19 Formula 1 races this year, delivering up some thrilling duels in motorsport’s elite discipline at the same time, sometimes literally wheel-to-wheel. The prize for this outstanding performance: first and second place in the drivers’ championship and undisputed champion of the constructors’ championship. To mark these achievements, Mercedes-Benz has dedicated a unique Collector’s Edition to each of its two world-beating drivers. The sporting competitiveness on the tarmac which propelled them both to their superlative performances can also be seen in the two very different designs. 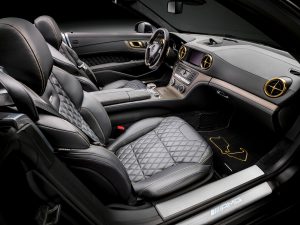 Lewis Hamilton’s Edition: Athletic and challenging – black
Formula 1 champion Hamilton demonstrated his penchant for glamour and the exceptional with a black SL 63 AMG – athletically challenging. This vehicle comes in the special paint finish designo night black magno which can be found on such detachable body parts as the exterior mirrors, door handles and rims as well. Gold-coloured lettering, fins and stripes on the rear bumper impart a feeling of power. The tailpipe trim is in chromed black.

Black and gold dominate the interior, too: gold-coloured stitching adorns the seats in black nappa leather, the instrument panel and centre console are also covered in black designo Exclusive nappa leather, with the trim parts gleaming in gold. 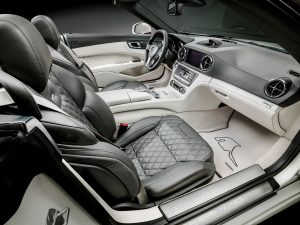 Nico Rosberg’s Edition: Elegant and stylish – white
Rosberg’s SL 63 AMG provides an elegant contrast. With the main body finished in designo cashmere white magno, the detachable body parts such as the door handles, wheels, lettering, fins, the insert in the front bumper, surround for the daytime running lamps, window trim and the spoiler lip in the boot lid provide a finely-judged contrast in designo himalayas grey. Both Formula 1 drivers were in agreement when it came to the tailpipe trim: it is in chromed black for the white car, too.

designo Exclusive Style leather in titanium grey sets the tone for the interior in the Nico Rosberg model. It adorns the seats, which have basalt grey topstitching, the steering wheel, the door beltlines, the soft-top cover and also the upper part of the instrument panel. The lower part of the instrument panel is finished in deep white nappa leather, as are the centre console and the door panels. The trim parts gleam in designo cashmere white magno.

The ultimate specification
The AMG 5.5-litre V8 biturbo engine in both Mercedes-AMG SL 63 special models has an output of 430 kW (585 hp) and torque of 900 newton metres, giving them breathtaking thrust. The top speed limit of both has been raised to a championship level of 300 km/h, making them true high-performance roadsters. Both the Lewis Hamilton and the Nico Rosberg model have the same top-flight specification. It includes the AMG Driver’s package, numerous assistance systems, AMG sports suspension, AIRSCARF, the Bang & Olufsen BeoSound AMG sound system, a panoramic vario-roof with MAGIC SKY CONTROL, as well as AMG sports seats and much, much more.

The World Championship 2014 Collector’s Edition thus offers the legend amongst sports cars that is the SL in two top-class versions. They reflect both the sporting rivalry and the goal shared between Lewis Hamilton and Nico Rosberg.

Each Mercedes-AMG SL 63 special model is a one-off 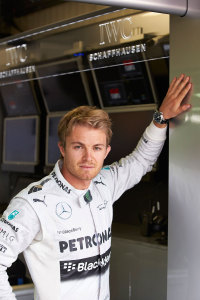 Every vehicle in the “World Championship 2014 Collector’s Edition” is a unique car, in the truest sense of the phrase, that will make it an absolute “must-have” for many a collector. For each vehicle in this Edition is in fact a one-off. Only 19 black and 19 white models are being produced – standing for each of the 19 Formula 1 race tracks that featured in the 2014 season. An illustration of the race track in question is hand-embroidered into the vehicle’s floor mats and engraved on a badge in the centre console as well as on the vehicle’s key.

Mercedes-Benz is offering the 19 black and white models of the “World Championship 2014 Collector’s Edition” exclusively to the members of the Mercedes-Benz Circle of Excellence. In keeping with the team spirit, these exclusive edition vehicles will at first only be offered in pairs, and subsequently also as individual units. Purchasers will also receive a helmet worn by Lewis Hamilton or Nico Rosberg. Further attractive extras include a Nico Rosberg or Lewis Hamilton Edition IWC Ingenieur chronograph watch, an F1 book signed by both drivers and an invitation to the opening race of the 2015 season, in Melbourne. The vehicles will be handed over at the German Grand Prix 2015.

Lewis Hamilton and Nico Rosberg SL 63 AMG Special Edition Pricing and Availability
The price for the strictly limited-edition and unique pair of vehicles, both of which immortalise the exciting duels fought through this Championship, is €629,510. A single Lewis Hamilton or Nico Rosberg vehicle costs €320,110 (incl. VAT).