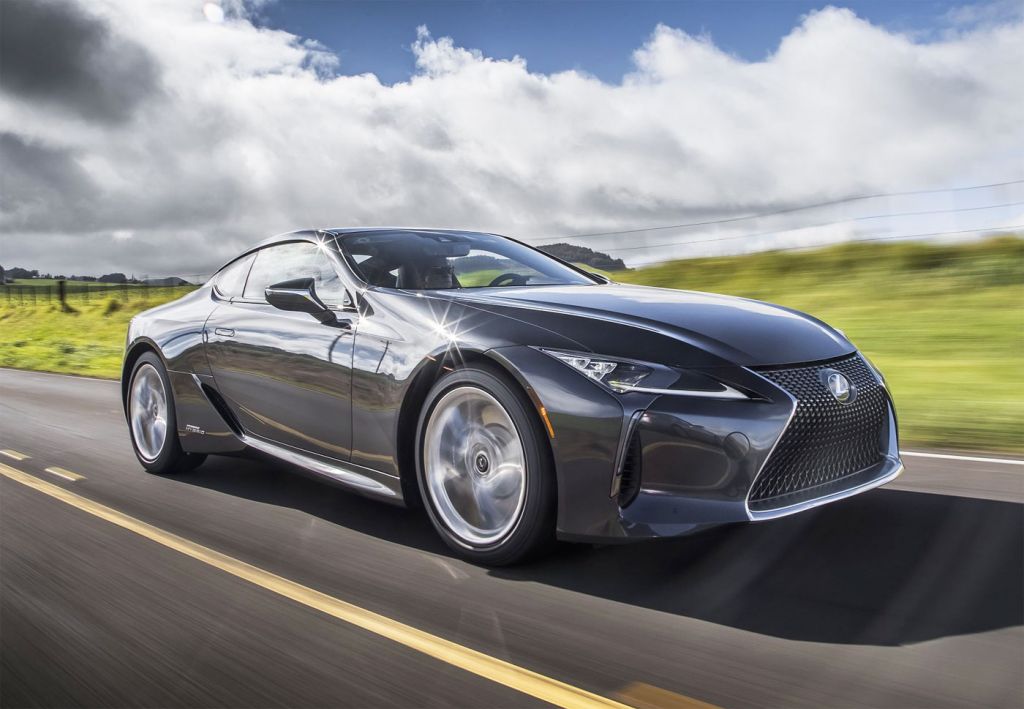 Here at Luxurious Magazine, we love our cars, and it is always a privilege to drive a Lexus. The LC 500 is a particular favourite, so we were excited to see the announcement of the 2020 LC Coupe.

Available to customers from July the new Coupe is the 2021 model year, revised quite a lot from the previous versions. Lighter by 10kg the suspension has improved for a softer, smoother ride with even better handling. Further improvements come with the addition of Active Cornering Assist, ten-speed automatic transmission and updated multimedia system.

Lexus has an ethos that every model in its range is subject to continuous improvement, with engineers continually exploring ways to hone and enhance every detail. This meticulous approach has delivered the new 2021 model year LC, marking an evolution in the luxury motoring qualities of Lexus’ flagship coupe. The driver is the focus of attention in most designing of Lexus models, and this can be seen in the improvements in both ride and handling.

I will take you through some of the standout changes for the 2021 model in more detail. The main objective to improve the 2020 LC Coupè’s performance, and this has been achieved with tweaks here and there. 10 kg, has been shaved off the weight principally with changes to the suspension. Aluminium lower arms, hollow anti-roll bars with a revised diameter and a new high-strength material for the coil springs have been used.

Next on the list was to improve the ride by making the suspension smoother. Also, to allow the driver to be more connected with the feel of the road. Lexus has given the car a softer stroke by increasing the length of travel of the front shock absorbers. They have altered the rigidity of the rear anti-roll bar, raising it to improve front turn-in handling.

Alterations to the software across several vehicle systems, including the Variable Gear Ratio Steering, Dynamic Rear Steering and Electric Power Steering has improved responsiveness. The driver also gets a better feel of the brake pedal with a change to the surface of it.

Continually looking to better previous models, Lexus has improved day-to-day driving in the “active zone”. A term given to the 50 to 70 % throttle range most commonly used by drivers. They altered the logic patterns in the LC 500’s 10-speed Direct Shift to achieve this. The direct-shift transmission allows revs to increase in the range to heighten the feeling of acceleration before shifting into the next gear.

When downshifting in the LC 500h’s Multi Stage Hybrid System, it will now enter second rather than third for smoother operation. Also, harder acceleration out of sharp bends is possible. 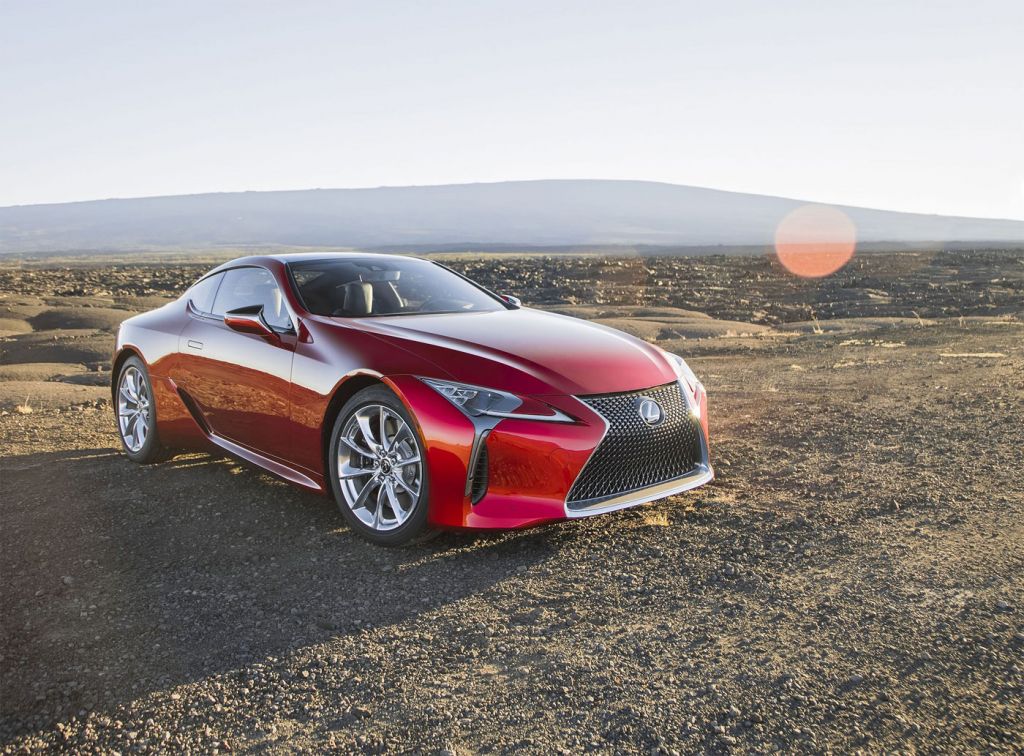 Lexus has always been a company that puts design high on its agenda when building a car. The LC coupe is a striking example of the creativity of the company’s designers. This is visible with the front mesh spindle grille covering the width of the car. Large glass panel and blacked-out rear pillars produce the illusion of a floating roof. Chrome mouldings echo the curving lines of a katana sword. As an option, you can have a CFRP composite roof for an even more muscular look.

Resembling the Afterburners of a jet, at night the rear light clusters are very distinctive. The front ultra-compact triple-LED lights are elegant and half the size of standard headlights.

Well known for its distinctive craftsmanship Lexus showcase this in the new LC Coupè. It integrates both function and comfort to allow for sports performance with a luxurious interior. The cabin has a low-set instrument panel, narrow front pillars allowing the driver a superb view ahead.

Flowing lines of the door panels’ bring a sense of continuity, which extends the exterior styling flowing from the bonnet to the windscreen. 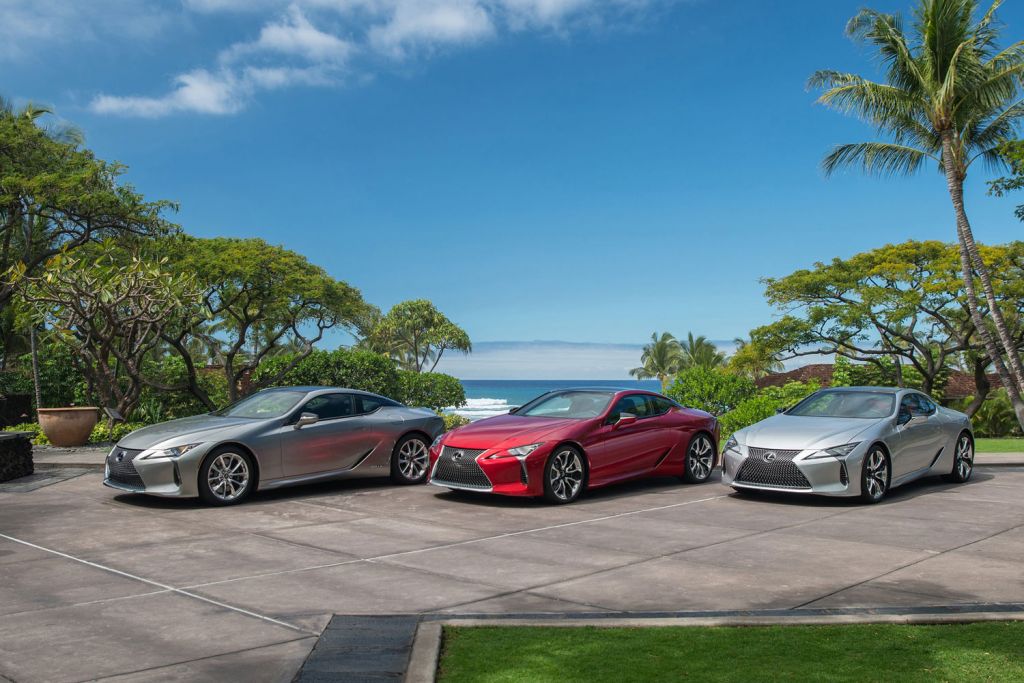 The seats, exclusive to the LC, are a two-part construction providing a seatback that drapes over the shoulders, then wraps around the back. A structure designed to hold the driver firmly when cornering at speed.

The steering wheel with a cross-section that varies in shape around its circumference allows options in grip and twisting of the wrist. Takumi craftsmanship is seen throughout the car, with a quality finish of the upholstery, trim materials and detailing.

When you start the car you can feel and hear the potential of the V8 engine as the full-throated engine note is generated by the variable Active Exhaust system. The power output of 464hp/346 kW from the 5.0 litre, can move the LC from standing to 62mph in less than 4.7 seconds. 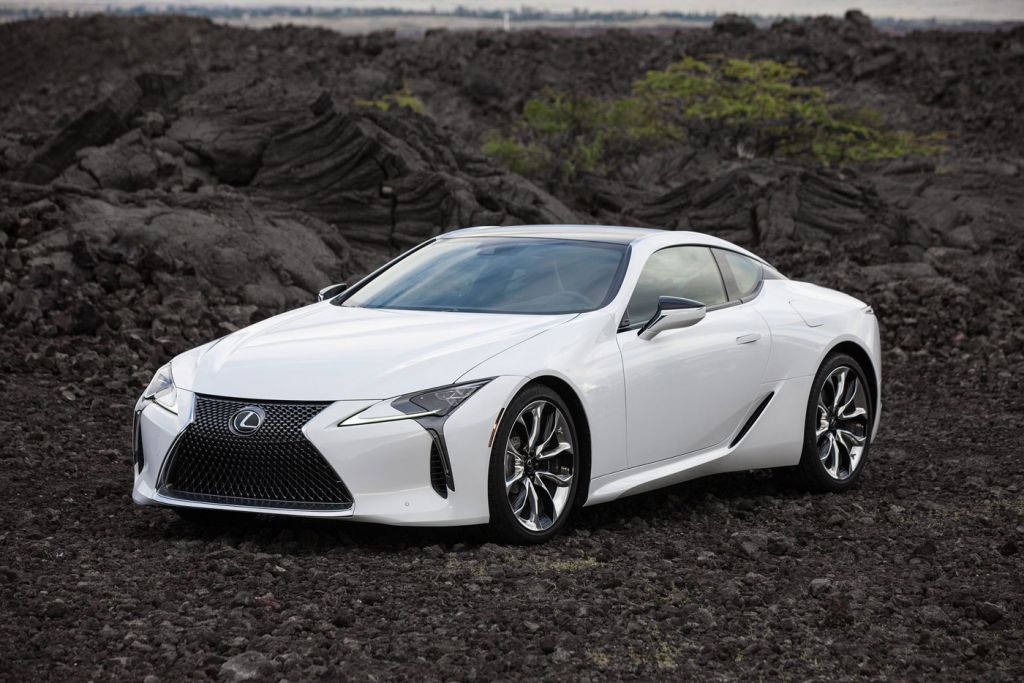 The LC 500h is maintaining that tradition of innovation Fifteen years on from Lexus’ introduction of the world’s first luxury hybrid vehicle. It has produced the first Lexus Multi Stage Hybrid. The Lexus hybrid powertrain, combines a petrol engine with two electric motor/generators, like other vehicles from the brand.

When the driver selects M mode, the gears sets work together to create the effect of 10 gear ratios, generating a highly engaging driving feel and enabling the driver to move through the ratios using paddle shifts. In automatic mode, AI shift-control matches gear selection to the driving conditions and the driver’s inputs. The Multi-Stage Hybrid System allows for more electric assistance at lower vehicle speeds and enabling the car to be driven at speeds up to more than 80mph with the petrol engine switched off.

Combined system output is 354hp/264 kW. With the benefit of the Multi Stage Hybrid System, power from the V6 engine and electric motor can be amplified by the four-speed automatic transmission, giving much higher drive power when accelerating. The LC 500h uses a compact, lightweight lithium-ion battery, located neatly between the rear seats and the luggage compartment. It has a high power density, with 84 cells producing 310.8 volts.

Inside multimedia features are controlled via a 10.3-inch high-resolution screen with a split-screen facility allowing different functions, including audio and climate controls, to be viewed and operated simultaneously. 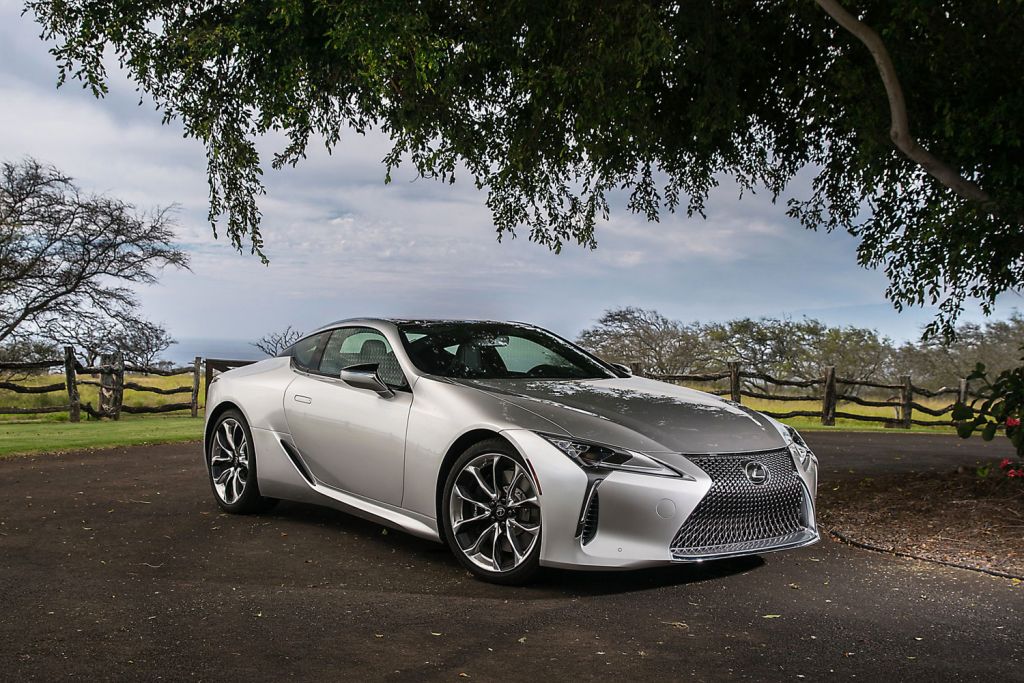 For the 2021 model year, all LC models are equipped as standard with Apple CarPlay® and Android Auto®, allowing for smooth, wireless smartphone integration and access to popular apps for navigation, entertainment and messaging. With Android Auto, the Google Assistant can be used, and tailored information can be sourced based on the user’s calendar, previous activity and established preferences.

Apple CarPlay allows customers to access the familiar interface from their iPhone® through the vehicle’s multimedia display. An iPhone can be connected to obtain journey directions, make calls, send and receive a message via Siri®, and gain access to apps such as Spotify, Audible and Apple podcasts.

Safety is always paramount in car design, Lexus puts this as a top priority, always looking for better ways to keep occupants and other road users safe. An innovative feature is automatic selection of “Park” in the transmission if the driver gets out of the car leaving the shift in any position other than “P”.

All LC 500 and 500h models are fitted with Lexus Safety System+ as standard. Included in the system is Traffic Sign Recognition and Automatic High Beam, Lane Departure Alert with Keep Assist, Pre-Collision System with pedestrian detection, and Adaptive Cruise Control. Another handy feature is the Blind Spot Monitor and Rear Cross-Traffic Alert.

We are very impressed with the look and details of the 2020 LC Coupè. The improvements will certainly enhance the driving experience which we have found to be excellent in the existing model. The LC 500 is already a popular car, and the latest version will grow this, strengthening Lexus’ position in the luxury market.