Online Editor, Simon Wittenberg, takes the F Sport variant of the hybrid Lexus saloon to the picturesque town of Rye in East Sussex.

Overview
ES stands for “Executive Sedan”, and this model has actually been in the Lexus line-up since 1989. The latest seventh-generation ES was introduced at the beginning of 2019, and replaced the GS which we took to Cornwall in 2018. As a previously US-centric car, it’s the first-ever ES to arrive in the UK and Western Europe and starts at an accessible £35,155 OTR. Lexus hopes that it will contribute significantly to the brand’s ambition to reach 100,000 annual new car sales in Europe by 2020, up from 75,000 units last year.

There are three variants of the front-wheel-drive ES 300h in the line-up, which are namely the ES, the F Sport, and Takumi. The ‘h’ in the name refers to the fact that the ES is a full self-charging hybrid (meaning you don’t have to plug it in), and the F Sport, which is making its debut in the ES range, is available from £38,155 OTR before adding any options. 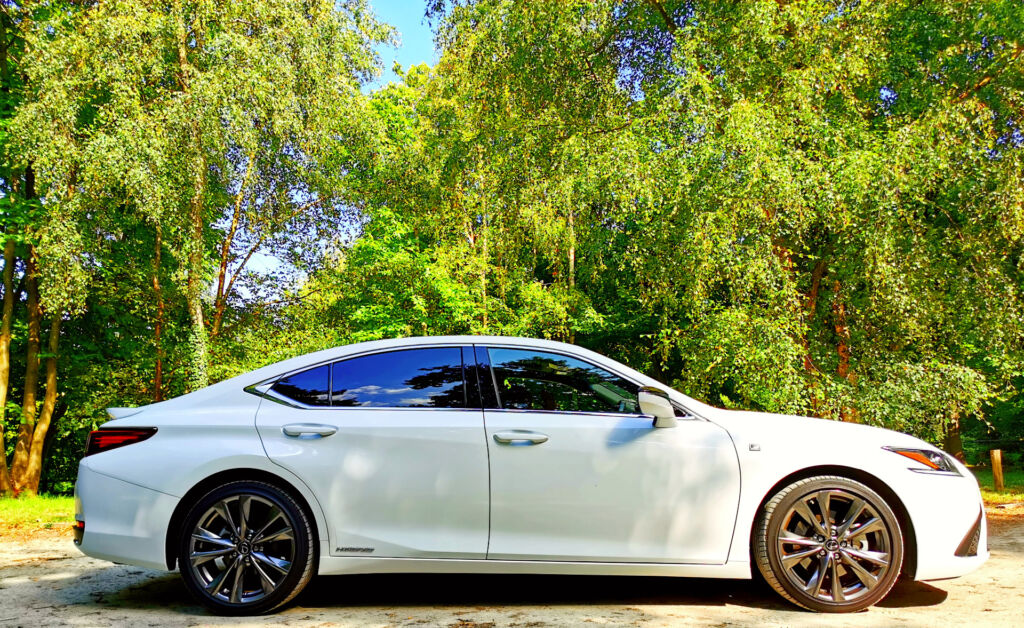 On the outside…
The Chief Designer of the new ES goes by the name of Yasuo Kajino, and he describes the luxury saloon’s new look as ‘Provocative Elegance’. The front-wheel-drive car sits on the Lexus Global Architecture-K (GA-K) platform, and is longer (at nearly five metres), lower and wider (now at 1,865 mm) than its predecessor, which has allowed the wheels to be pushed closer to the car’s corners. 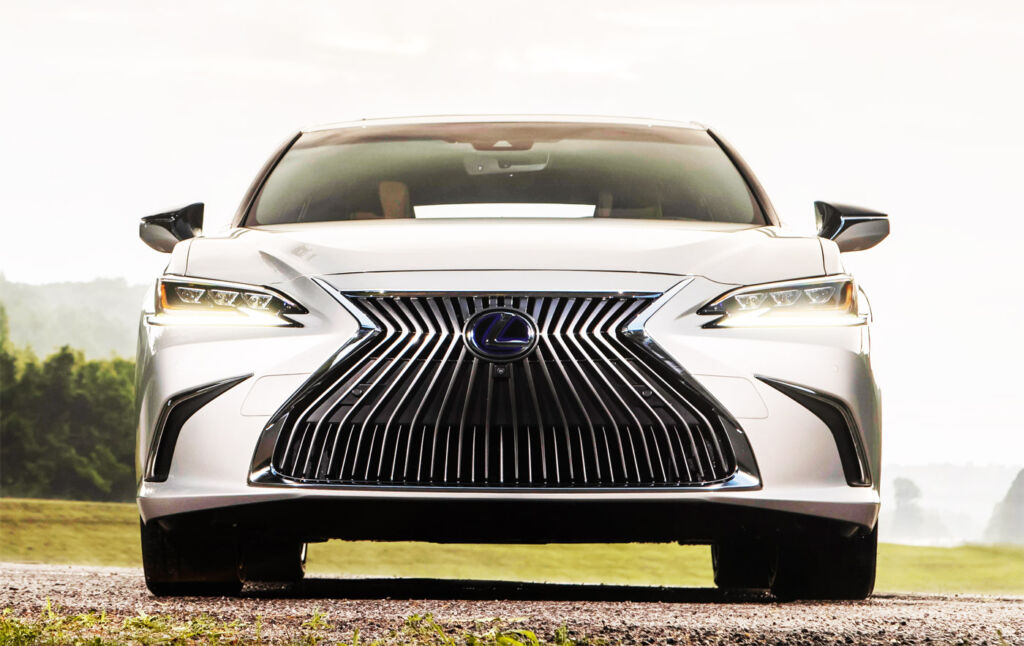 Up front, there’s the signature Lexus hourglass grille which sits between the inward-facing LED headlamps with tick-like daytime running lights. The sloping roofline brings a smart and executive-esque look to the car, which means that the side windows have a rather pointed profile. At the rear, which has a touch of GS about it, you’ll find a fixed arched spoiler sitting on the boot lid, whilst the F Sport bumper is finished with a chrome valance which shields the tailpipes.

The F Sport variant has 19-inch alloy wheels as standard, the largest of the range and is similar in design to those fitted on the Lexus LC Coupé. Our test car arrived in Sonic White and is one of the nine metallic shades which vary in price from £670 to £920 as an optional extra. There’s only black on offer as a solid no cost colour. 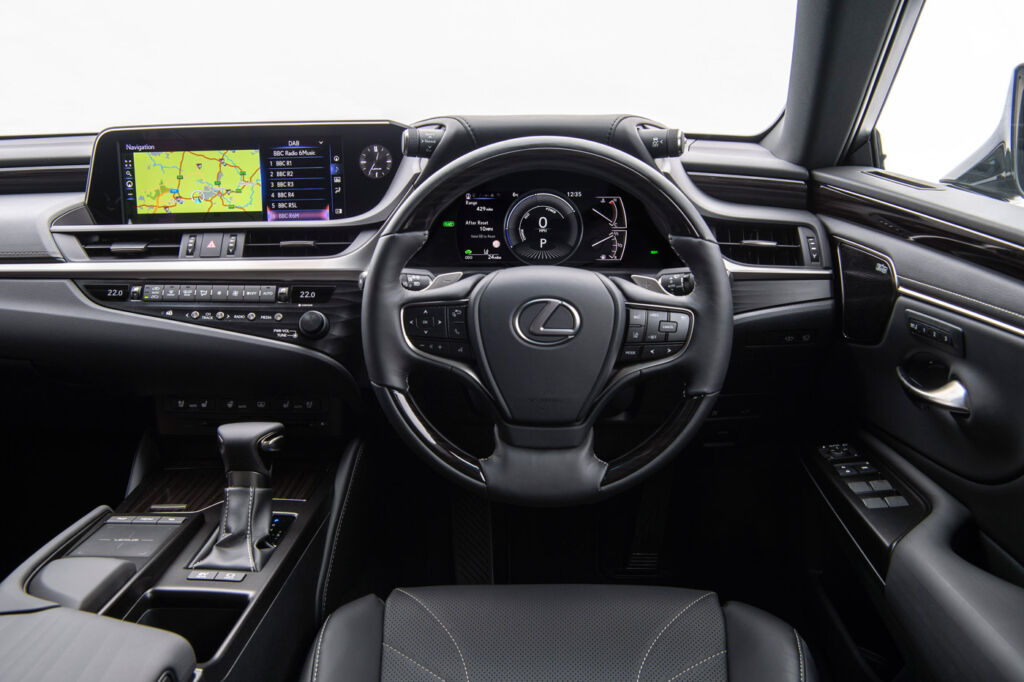 On the inside…
The F Sport grade provides a comprehensive specification for the spacious interior of the ES. There are two choices of upholstery for the cabin, which is namely Black or Flare Red leather (F Sport only) with aluminium Hadori trim inspired by Japanese katana sword-making techniques.

Our test car was furnished with the latter, and the uber comfortable eight-way adjustable front sports seats, which can be heated, and which come with four-way driver lumbar support, are embossed with the F Sport emblem. The F Sport steering wheel also features a perforated leather trim (the Takumi spec has smart wooden inserts), as does the gear shifter.

On the centre console, there’s the familiar Lexus touchpad to scroll through the on-board computer data, the audio entertainment and the intuitive satellite navigation which has handy speed camera alerts on the eight-inch multimedia screen.

ES owners have plenty of storage up front, thanks to the door inserts, the very deep armrest which has a 12V socket, and the cup holder which has a cleverly thought out button to adjust the depth for a short or tall container. Lastly, there’s the pop-up compartment where you will find the USB sockets. 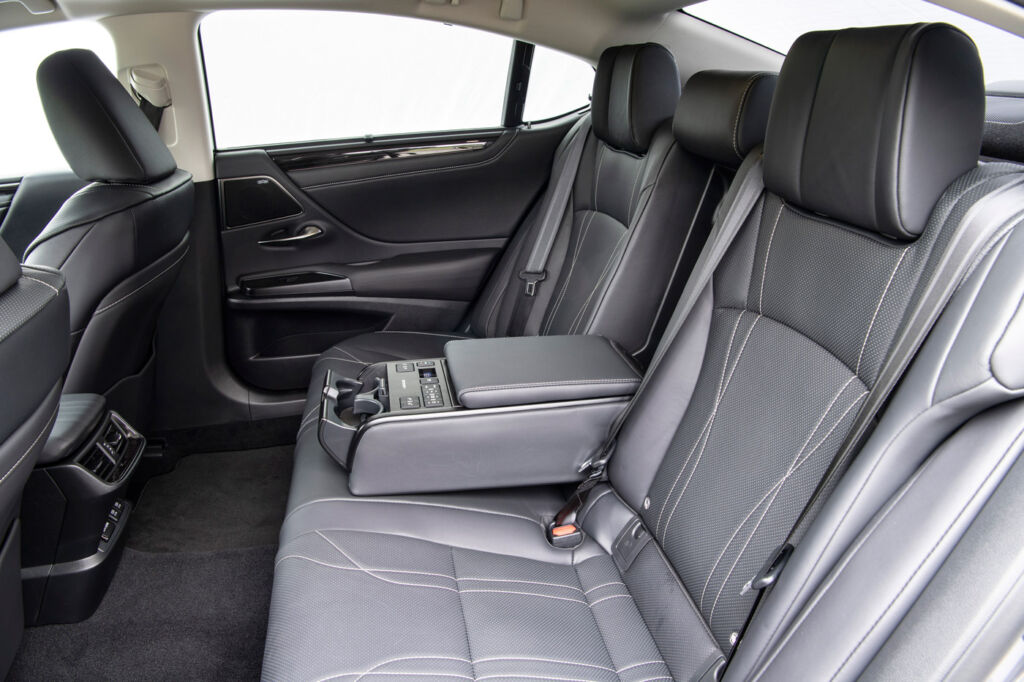 The cabin can be flooded with natural light with the electronic sunroof which is standard across the ES range. In the front and rear, head and legroom are very good, and it doesn’t feel too cramped when there are four of you in the car. With a 454-litre boot, there’s ample space for two medium suitcases plus three or four small rucksacks, but that’s it for capacity as the rear seats are fixed and don’t fold down.

The drive…
The latest ES uses the fourth-generation Lexus Hybrid Drive system, which has been designed to deliver responsive performance coupled with exceptional fuel efficiency. It is made up of six different components. These are namely a 2.5-litre petrol engine, a high output electric motor and generator, a battery, a power control unit, and a power split device which distributes energy between the engine, motor and generator. The system allows the two power sources i.e. the motor and the engine to work in harmony. This means that when the engine is running, it drives the generator to charge the battery, so there’s never the need to plug the car into the mains. 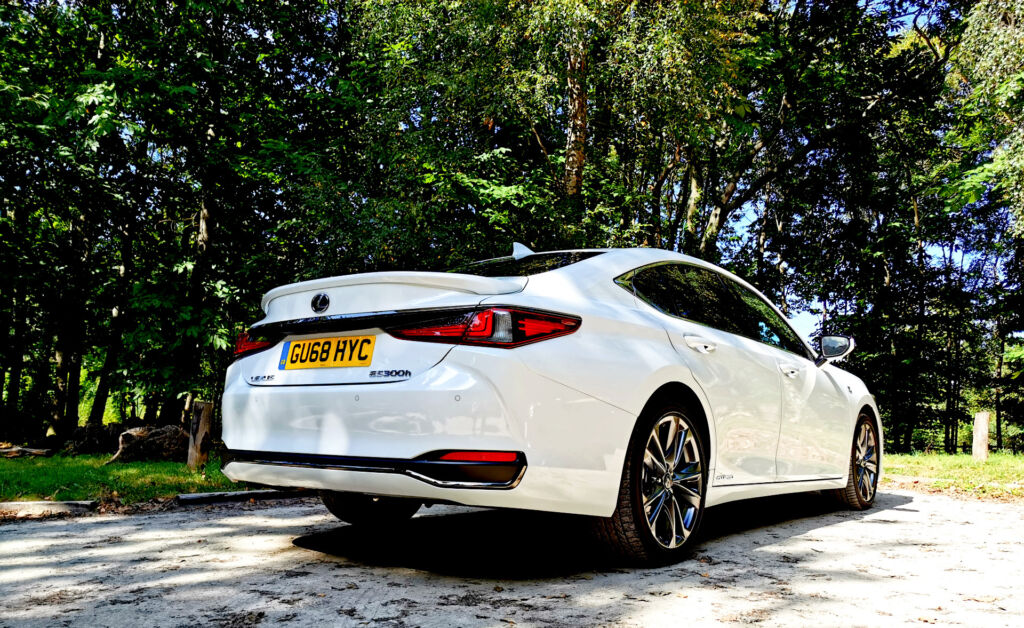 Conversely, at lower speeds, the generator will shut down the engine to let the electric motor take over driving the wheels, meaning that some miles on the road will essentially be with zero emissions (denoted by a green EV symbol on the dash). Otherwise, with the F Sport being on 19-inch wheels, the CO2 output is quoted at a very low 106 g/km.