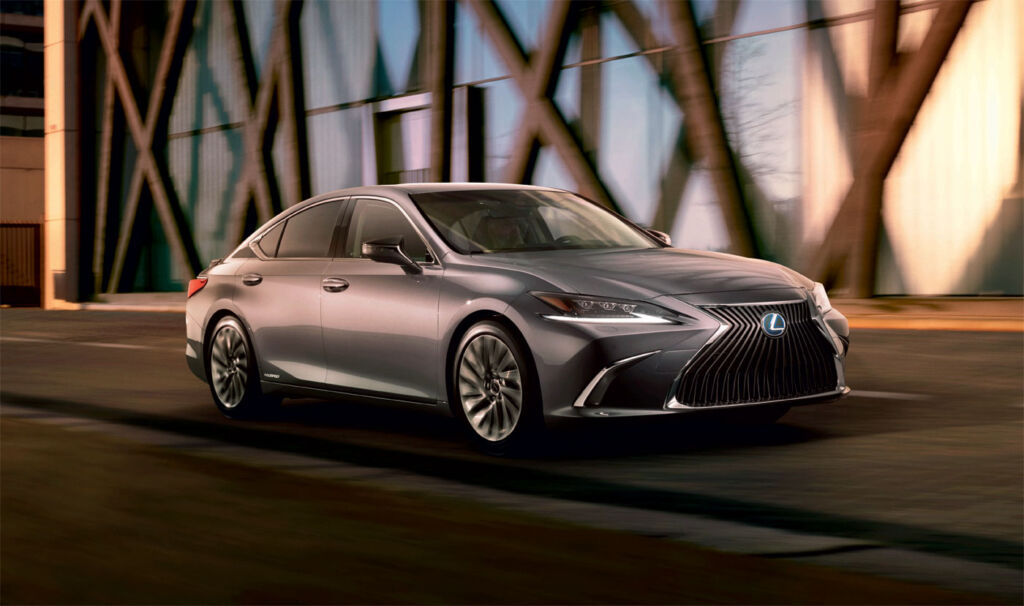 Lexus has unveiled the all-new 2018 Lexus ES saloon, the replacement for the soon-to-be-phased-out GS four-door executive rival to the BMW 5-series, Audi A6 and Jaguar XF models.

The new ES was unveiled simultaneously at the launch of the brand new Lexus airport lounge in Brussels. It’s the first ES generation to be sold in the UK and western Europe and uses Toyota/Lexus’ Global Architecture-K platform, making it longer, lower and wider than the preceding ES that’s been sold up to now in markets like the US and Russia.

The eye-catching styling is set to offer customers a more engaging driving experience and has higher safety provisions. Available from January 2019, the UK range will feature the ES 300h, powered by a new self-charging hybrid system. The new ES saloon will be a core model in Lexus’s line-up and the brand’s ambition is to reach 100,000 annual new car sales in Europe by 2020. The company achieved close to 75,000 sales in Europe in 2017.

New dimensions in ES design
Because the new ES is built on the all-new Global Architecture-K platform, it allows for a bonnet line. This produces a distinctive silhouette with a strong downward slant, creating a dynamic yet fluid shape. Up front, the ES’s face is dramatically different. The rear end is clean and sharply chiselled with LED lamps that wrap around the quarter panels. F Sport models add a rear spoiler, badging and dark lower valance. Available in 12 colours, the car is longer (by 65mm) and wider (by 45mm) and the longer wheelbase (by 50mm) allows the wheels to be pushed closer to the car’s corners. Its stance and proportions reflect its new-found performance capabilities and the car’s look has been described as “provocative elegance” by ES Chief Designer Yasuo Kajino. 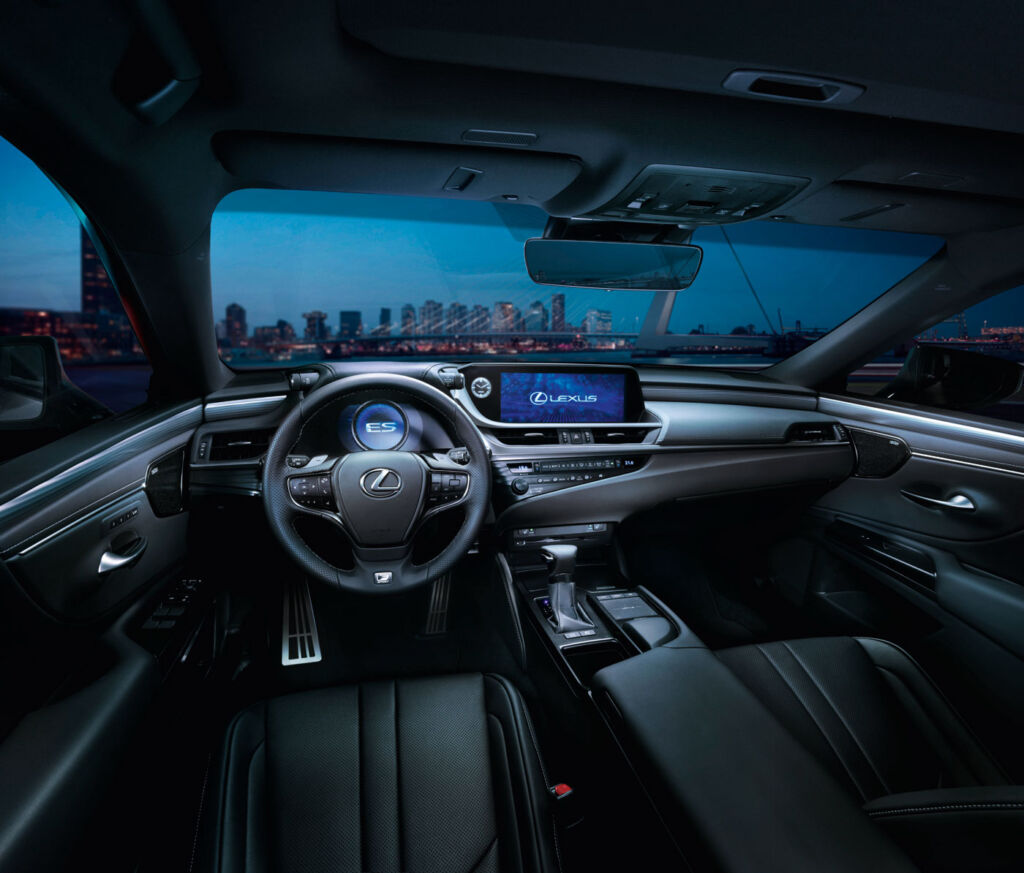 The Lexus Future Interior concept
When designing the look, the Lexus Future Interior concept was a focal starting point. The driver’s focus is kept on the road ahead by centralising the display screen, instrumental panel and head-up display in a tight cluster. Front passengers enjoy a more spacious and relaxing environment. The option of a navigation system comes with a range of connected services. The 12.3-inch multimedia display and second generation Remote Touch touchpad comes with voice recognition enabling contactless control of smartphones. Rear passengers can relax with a lower hip point and more headroom, while the longer wheelbase ensures generous legroom. The trio of interior colours come in Rich Cream, Black Chateau and Topaz Brown while the model makes use of traditional materials such as bamboo and Shimamoku wood.

A new era of performance
The goal of the engineering team, led by Chief Engineer Yasuhiro Sakakibara, was to transform the image of the ES. That meant, turning a saloon, known primarily for comfort, into one that is also capable of handling and power which you can feel and hear. Various grades of high-tensile steel reduce weight, while enhancements such as an all-new multi-link rear suspension design, electric power steering and a V-brace behind the rear seat gave engineers the flexibility to tune with a new-found precision. All of this detail has been designed to give the driver a complete sense control when behind the wheel.

Fourth generation hybrid drive system
The ES 300h is equipped with a new, fourth generation self-charging hybrid system that can deliver exceptional fuel efficiency, responsive performance and minimal emissions for a mid-size luxury saloon. It has a 2.5 litre four-cylinder petrol engine with a lighter, compact power dense electric motor. Total system power is 215bhp/160kW and combined cycle fuel economy is from 60.1mpg. Overall driveability has been improved thanks to a more sophisticated hybrid system control computer that is better able to mimic the feel and power delivery of a standard petrol engine. The nickel metal hydride hybrid battery is more compact and is located beneath the back seat which doesn’t encroach on boot space. 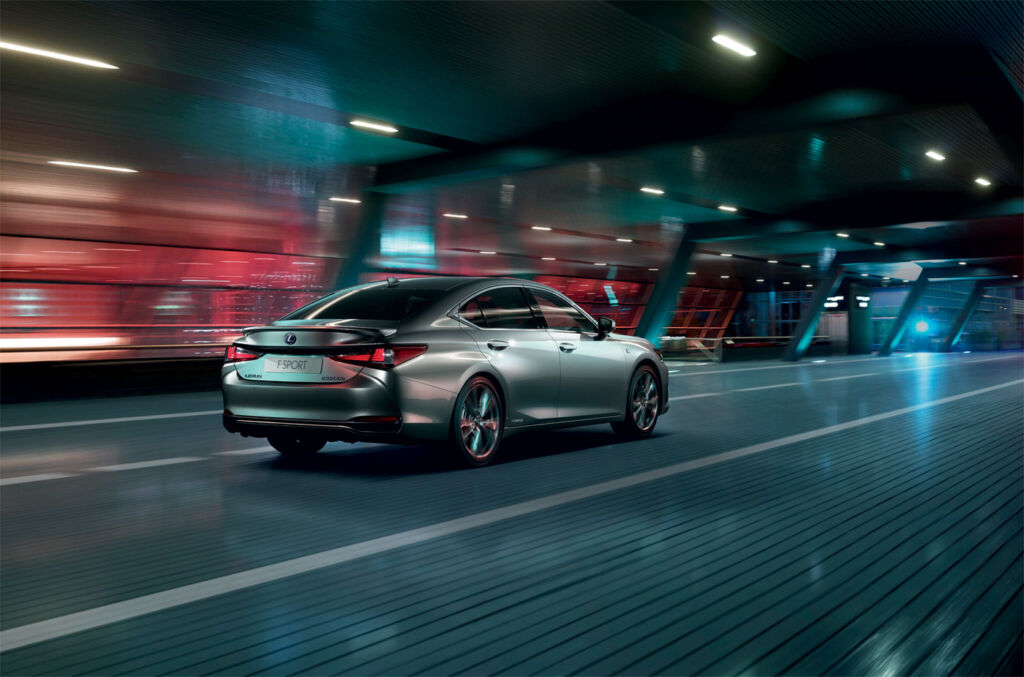 Safety provisions
In the UK, the new ES 300h will be equipped as standard with the latest Lexus Safety System +. This package expands on the driving scenarios in which it can provide added protection for driver and passengers and assist in preventing an accident from happening. The new features include daytime cyclist detection which is part of the comprehensive Pre-Collision System (PCS). The same system has also been enhanced to detect pedestrians at night by increasing the radar’s sensitivity and dynamic range. The new two-stage adaptive high beam system (AHS) turns the high beams on and off automatically as well adapting the light pattern to provide enhanced illumination while reducing glare for oncoming drivers.

Lexus ES – Where and How?

Available from January 2019, the UK range will feature the ES 300h, powered by a new self-charging hybrid system. The ES 200, ES 250 and ES 350 petrol engine models will be on sale in selected European markets from September 2018.