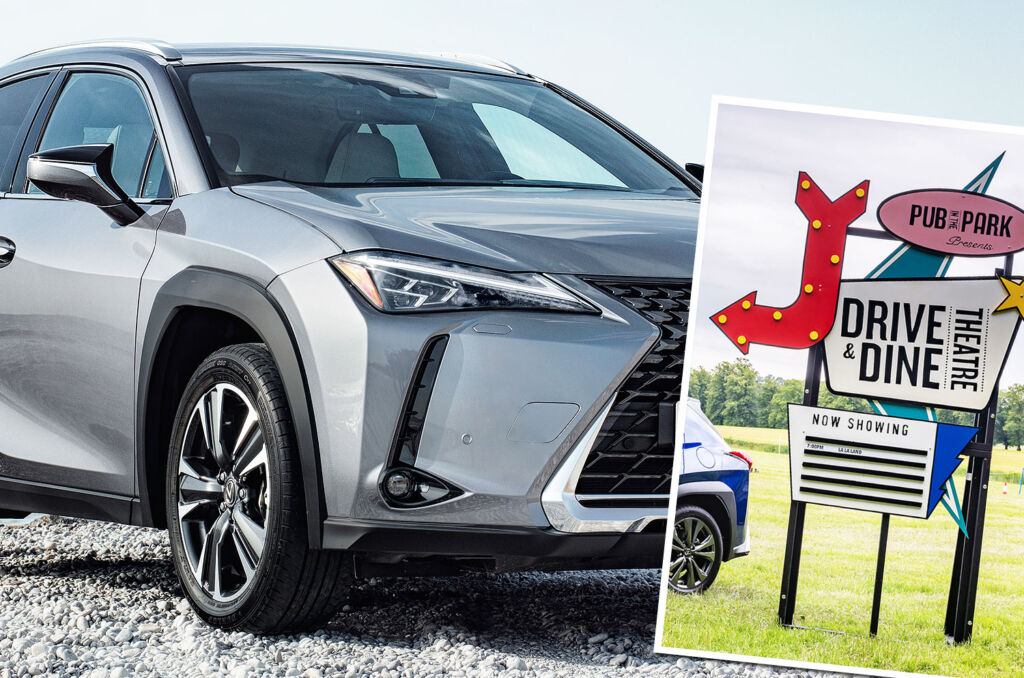 This was a review with a difference, as we were not only putting the Lexus UX 250h through its paces (UX stands for ‘Urban Crossover’ by the way), but we were also seeing how it worked as a movie companion.

Lexus, the Japanese car manufacturer, has sponsored Drive & Dine Theatre, a series of socially distanced drive-in cinema and comedy events, which are being run by Pub in the Park at eight different locations in the south of England throughout July and August.

With bricks and mortar still off-limits at the time of writing due to restrictions associated with the Coronavirus pandemic, one of the safest ways to watch a film beyond your own couch in this ‘new-look’ world is to be confined to the comfort of the front row seats of your car. 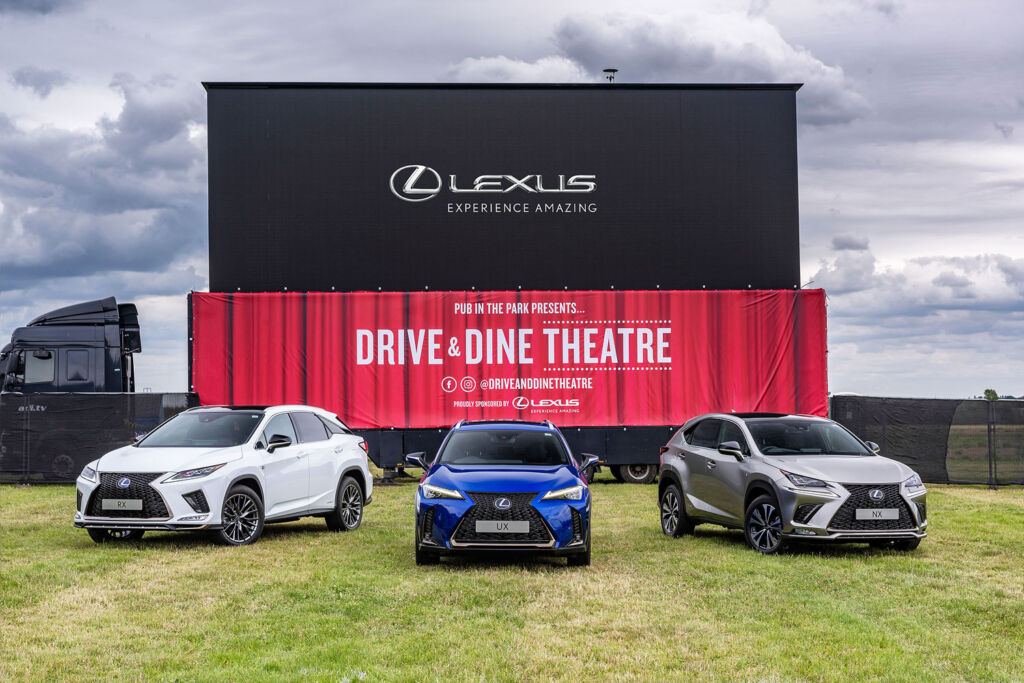 Our chosen destination was the picturesque Luton Hoo Country Estate for an afternoon showing of the iconic ‘Back to the Future’ film from 1985, and this was my wife and I’s first time watching a movie on four wheels, rather than being confined to the grass with a beanbag and a picnic blanket for a bit of added luxury and warmth. 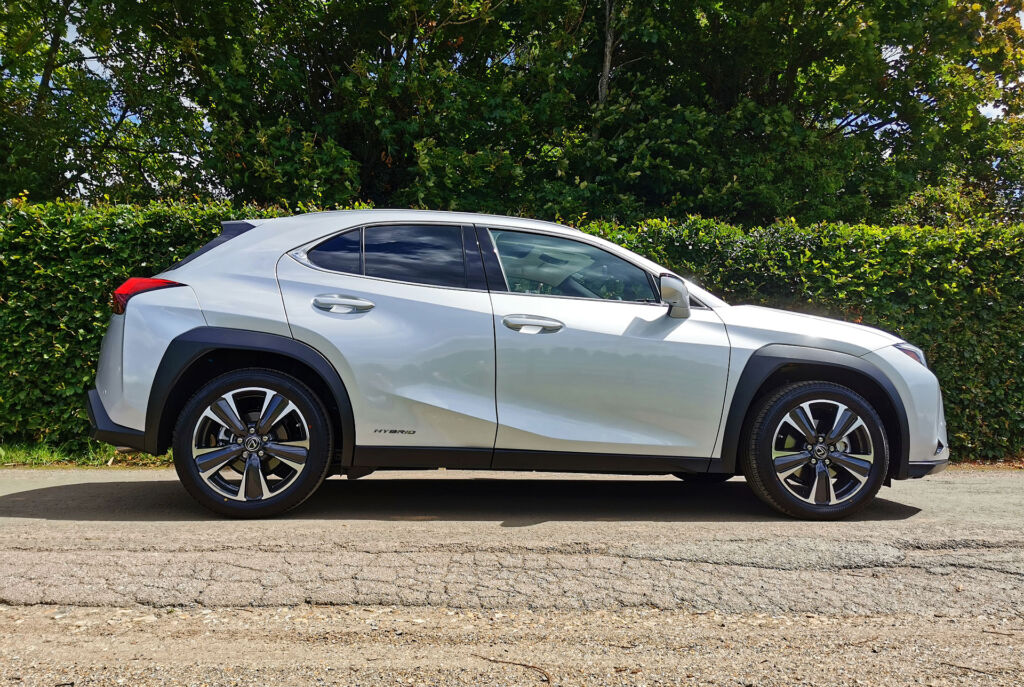 According to the Drive & Dine Theatre rule book, you can only attend one of the screenings if your car is less than two metres in height and, as the compact UX stands at 1.5 metres tall, that was already one tick in the box for this model.

There are indeed plenty of other pluses for buyers of the Lexus UX 250h. This model does look good in the flesh, and the Satin Silver metallic shade of our test car (an extra £570 on top of the OTR price of £40,420 for the Takumi E-Four) accentuated the UX’s striking exterior, the typical Lexus front-end ‘hourglass’ grille, the 18-inch alloys, as well as the grey wheel arch surrounds, which are another standout attribute. 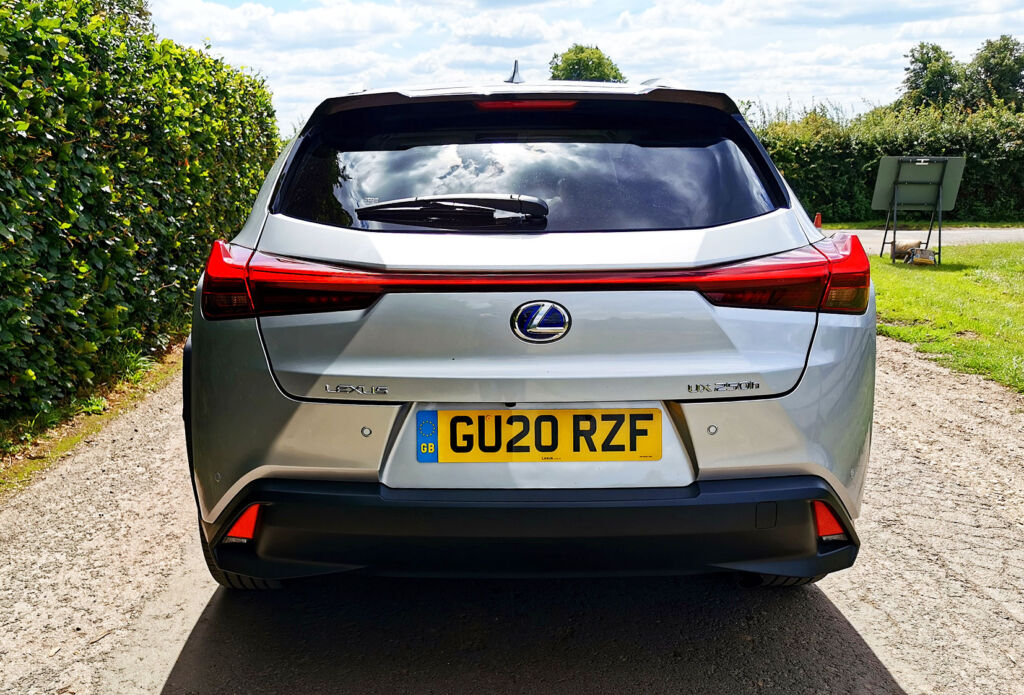 The styling at the back is quite angular, which means that it’s a feature that may divide opinion, but it’s practical. The boot, which comes with an electronically-operated tailgate is nice and roomy with 283 litres to hand when the rear seats are upright, which increases to 1,194 litres when laid flat.

Out on the road, this is where you appreciate another benefit of driving a UX 250h. As the ‘h’ in the model name suggests, the UX range is currently only available as a self-charging hybrid (until the all-electric UX 300e is unveiled in 2021), which means that there’s no reaching for cables to replenish the battery – this is all done for you. 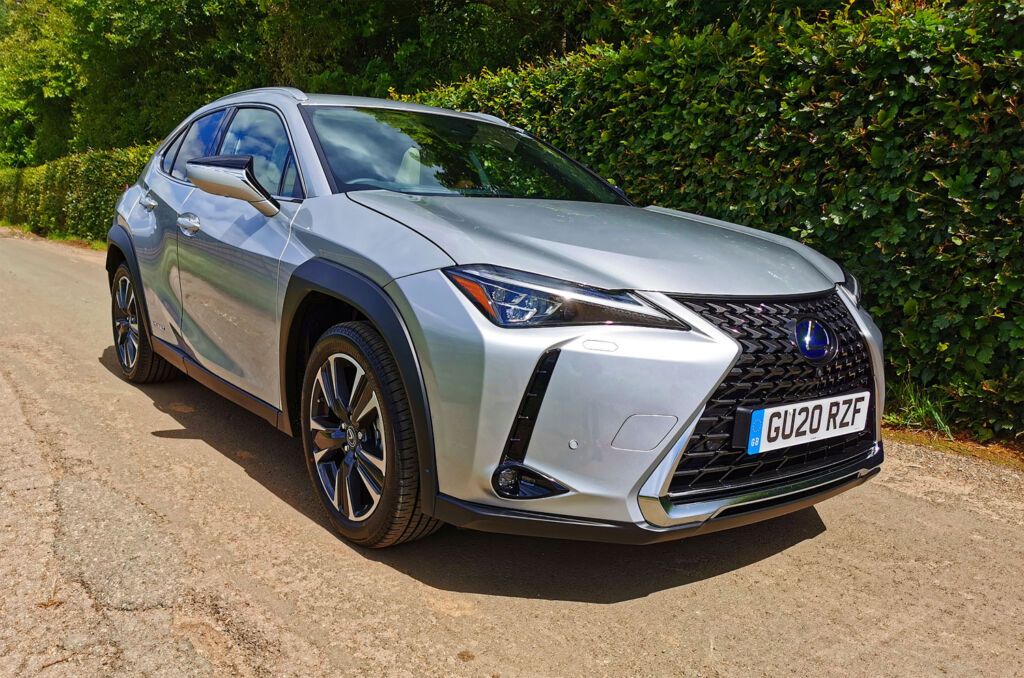 The car is driven by an economic two-litre petrol engine, and E-Four means that the variant of the UX that we drove, is all-wheel drive (rather than just front-wheel-drive).

Therefore, there is an electric motor on both the front and rear axles and, under normal driving conditions, the power goes to the front wheels, but if the car senses that the rear is starting to lose grip, power will be sent there to help prevent this.

The result of being a hybrid is that it’s not only smooth and quiet on the tarmac, but fuel economy is impressive too at 47 mpg, whilst emissions sit at 136 g/km CO2 (equating to VED band H and £215 road tax for the first year). 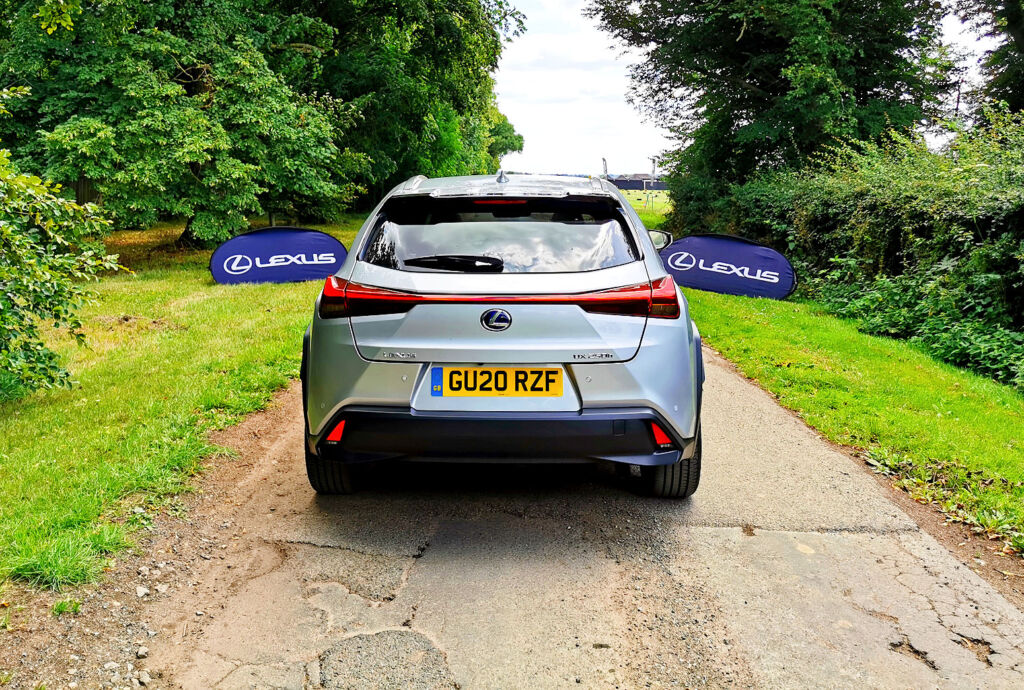 With a recommended arrival time at Luton Hoo an hour before a film starts to get settled in, this gave us an ideal opportunity, once parked up on the front row in full view of the big screen, to recline the electronically-controlled seats, and to rummage around in all the nooks and crannies of the spacious and sumptuous rich cream leather-clad cabin.

In front of the gear shifter for the CVT transmission, and in between the wireless charging station and the signature Lexus mousepad to control the infotainment system, there are two bottle holders, which were called on for our in-car refreshments, plus the centre armrest lifts up to reveal a couple of USB sockets. 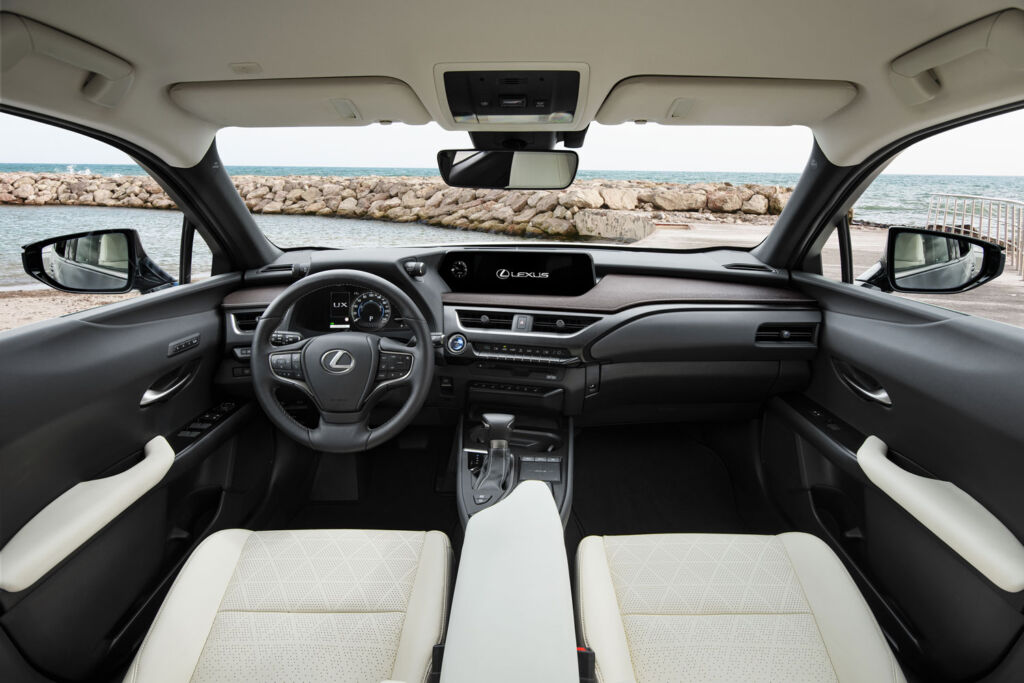 The door compartments are also relatively deep, there’s a handy pocket on the rear of the passenger seat, whilst the centre armrest folds down at the back to reveal two further bottle holders.

Food has long been a staple of the going to the cinema, and the Lexus Drive & Dine events lined up Tom Kerridge, the English Michelin-starred chef, to put together the menu, that was made up of an array of delicious mains and desserts inspired by the best of old-school American drive-in servings. 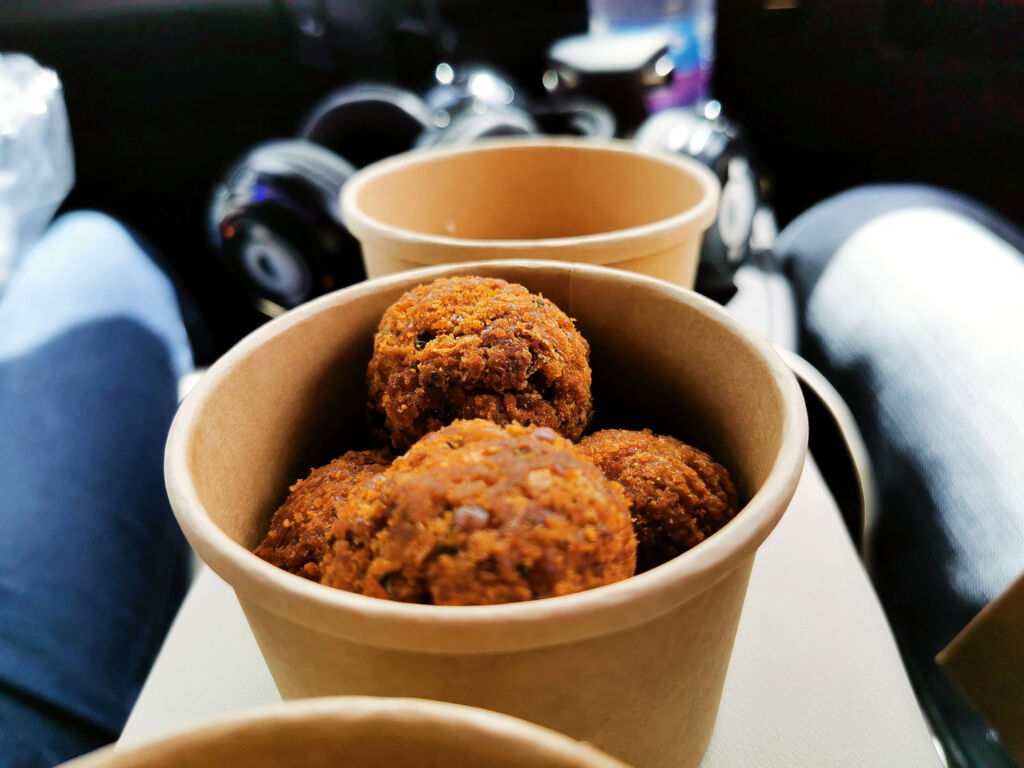 We tucked into a vegetarian falafel picnic box and a bean chilli burrito, and one of the other great things about being confined to the private cocoon of the UX’s interior is that you’re not disturbed by smells wafting from other people’s food, or the sound of someone making their way through a box of popcorn.

The acoustic windscreen has also been designed for added sound deadening, so that your focus is on what’s happening on the inside, rather than being distracted by any surrounding noise.

On the subject of sound, gone is the day where you tune your radio into the required frequency to hear the on-screen action, as you’re now given wireless headphones, so we didn’t really get a chance to put the Mark Levinson Premium Surround Sound system to a ‘cinematic’ test. However, it was perfectly adequate for appreciating some mellow tunes on the radio on our round-trip to the Drive & Dine Theatre.

So, with all of the above taken into consideration, how does the Lexus UX 250h stack up when taking it along to the pictures? 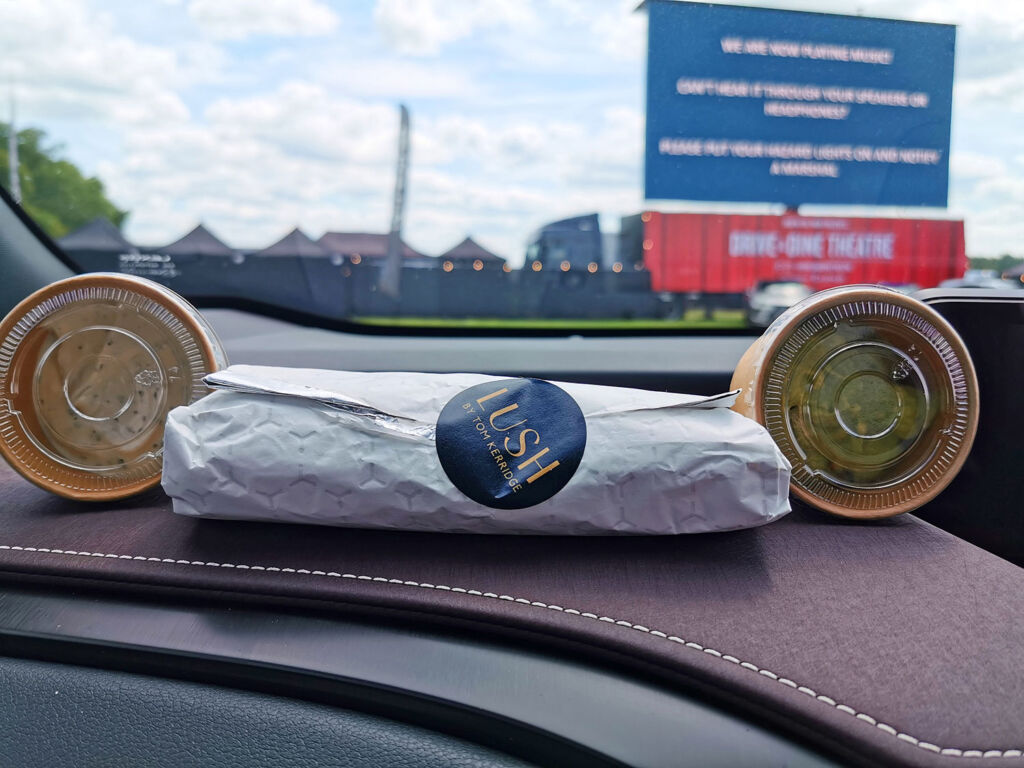 There’s actually a lot that has been cleverly fitted into a fairly compact package. There’s ample space to recline the supportive seats, there’s enough storage to spread out with your in-car refreshments, and all-in-all, this Lexus is a very nice place to be when sitting stationary for more than a couple of hours.

Therefore, in answer to the aforementioned question, the Lexus UX 250h does make for a great movie companion, and it proved to be the perfect environment in which to enjoy one of our all-time favourite films and to cast our mind back to the magic of the 80s, just before the Japanese marque arrived in the UK.

For more information on the Lexus UX range, visit www.lexus.co.uk/car-models/ux.

Take a look at our Instagram page for pictures from our review.