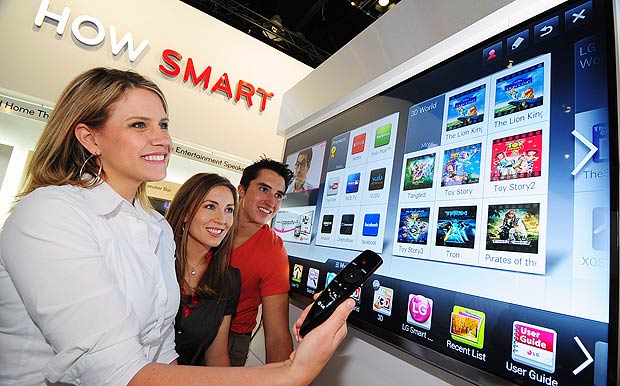 Led by the 55-inch 3D OLED TV and the 84-inch 3D Ultra Definition (UD) TV, LG will present a wide variety of new products, technologies and features catered to please consumers worldwide. A thoroughly upgraded CINEMA 3D experience awaits, as LG’s new CINEMA 3D Smart TVs, monitors and projectors have been optimized with new and upgraded technologies and features, including LG’s fully matured Smart TV ecosystem which contains over 1,200 apps and premium 3D content. LG will display over 500 products throughout its 2,043m2 booth, under the slogan, “How Smart Is Your 3D?” Visitors will be given LG’s light-weight and comfortable 3D glasses, 120,000 of which will be available at CES, roughly eight times the number of 3D glasses distributed at last year’s CES. LG will also attract visitors by installing an ultra-large 3D screen at the booth entrance, composed of 122 55-inch 3D LCD TVs.

“The 3D and Smart TV revolution is just beginning and LG is committed to convincing consumers the world over that these technologies are the future, not just a fad,” said Havis Kwon, President and CEO of LG Electronics Home Entertainment Company. “We will once again showcase the excellence of CINEMA 3D, which has become the global standard for 3D. CES also presents a meaningful opportunity for us, as our CINEMA 3D Smart TVs strive to achieve the global No. 1 market share.”

Large-Screen CINEMA 3D Smart TVs
In light of increasing quantity and quality of 3D content, consumer demand has been growing for larger screens which can generate more realistic and immersive 3D viewing experiences. As a result, LG will unveil a wider range of large-screen CINEMA 3D Smart TVs, spanning between 55 and 84 inches.

Visitors to LG’s 3D Game zone will experience 3D gaming via a range of 3D monitors connected to Microsoft’s XBox Kinect. The new 3D monitors have been optimized for gaming, as evidenced in Dual Play, which allows two gamers to simultaneously play the same game on a single monitor without having to split the screen.

Immersive 3D Sound
Also at CES this year, LG has prepared a room, where visitors can experience LG’s 3D sound technology through LG’s new home theater system. Viewers can feel 3D movements through the sound, as the sound output is synchronized with the movement of various on-screen objects, allowing for a more immersive viewing experience.

Smart TV: Upgrade of NetCast, LG’s Proprietary Smart TV Platform
Over the past year, LG has elevated the user experience of its Smart TV function by adding over 1,200 apps and a range of premium content services. Such growth in sophistication has been accompanied by increased user convenience. NetCast, LG’s own Smart TV platform, has been upgraded and an integrated search function has been added to allow easier and quicker access to content. In turn, popular search words can be used to search through LG’s expansive Smart TV ecosystem. In addition to basic communication functions, social networking services (SNS) on LG’s Smart TV now permit users to “share” and “like” what they’re watching. NetCast will be the platform in approximately 60 percent of LG’s flat-panel TVs introduced this year.

Another noticeable advancement in user convenience is the new Magic Remote. In addition to the familiar Point control mode, the new Magic Remote allows three additional modes: Voice Recognition, Magic Gesture and Wheel. Combined, the four control modes facilitate easier, more natural navigation and browsing. For instance, when performing searches, users no longer have to punch in each individual letter through on-screen menus, as Voice Recognition allows users to simply speak into the Magic Remote.

LG intends to deliver the most enjoyable Smart TV experience through its CINEMA 3D Smart TVs. In order to enhance LG’s competitiveness in the quantity and quality of 3D content, LG will continue to add a range of high-quality 3D content, such as Hollywood movies and games, as well as user-generated content (UGC).

LG Smart TV with Google TV is easy to use, due to the combination of an Android-based user interface and Magic Remote Qwerty designed by LG, which combines the user-friendly benefits of LG’s Magic Remote with a QWERTY keyboard.

The Next Generation Display: 55-inch 3D OLED TV
What sets LG’s TV picture apart from other OLED TVs is its 4-Color Pixels and Color Refiner which work together to generate natural and accurate colors that are sharp and consistent. The 4-Color Pixels feature allows for more accurate color depiction by using a set of four colors (red, green blue and white) in comparison to the RGB setup used by other OLED TV manufacturers. Color Refiner ensures consistency in colors from a wider viewing angle via an LG algorithm which improves and refines hues and tones. This is in contrast to other OLED TVs which often exhibit drastic changes in hues from different viewing angles and abnormal color gamut.

Boasting an infinite contrast ratio, LG’s OLED TV exhibits vivid colors and the smallest details regardless of the overall luminance of the on-screen image. In turn, colors and details throughout an entire image are preserved with utmost clarity and sharpness, even when displaying scenes with dark lighting. Such color capabilities are technically impossible with LED and LCD display panels. And at 1,000 times faster than LED/LCD displays, LG’s OLED TV shows crystal clear motion without any blurring or bleeding.

The energy efficient 3D OLED TV weighs a mere 7.5kg, making it easy to install and move around. Because its defect rate is minimal, the 3D OLED TV’s productivity is high. Meanwhile, the 3D OLED TV uses a WRGB-type LG display panel, which is optimal for the production of large-screen TVs and ensures low manufacturing costs.

3D IPS Monitors
LG will unveil several series of 3D IPS monitors. Overall, LG will be bringing to market a total of 23 3D IPS monitors in 2012. With LG’s 3D IPS monitors, users can view 3D content from a far wider angle of 178 degrees without any changes in color or sacrifice in color consistency.

The CES Innovations Awards is awarded by the Consumer Electronics Association (CEA) and the Industrial Design Society of America (IDSA), which assess products based on their technology and design.