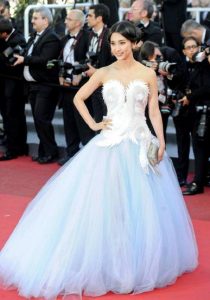 Symbolizing a path of true splendor and glory, the Cannes Film Festival’s red carpet is a work of cinematic artistry in itself, starring beautiful starlets, illuminating directors and remarkable movie-makers. And this year, this motion picture will shine ever more radiantly due to a new legendary star Piaget.

Walking the red carpet for her latest work, “Snow Flowers and the Secret Fan”, Chinese actress Li Bing-Bing specifically chose to be adorned by Renowned Swiss Luxury Watchmaker and Jeweler, Piaget. Recognizing the occasion as one of utmost prestige and eminence, both Li Bing-Bing and Piaget began the selection process very early on, finally deciding on signature pieces from the brands luminous Limelight Jewellery collection to accompany her down the red carpet.

Dressed in a breathtaking ball gown with “layerings” of feather, Li Bing-Bing‘s red carpet look was cleverly embellished with embroidery details both on the dress as well as on the spectacular jewellery pieces. Particularly, the smoky blue-gray color of the gown was further resonated in the main stone of her Piaget Limelight motif broderie ring. What you have is a magnificent duo of true beauty, talent, and craftsmanship; a picture perfect imagery with everlasting grace and elegance.

A long time sponsor of the American Independent Spirit Awards, Piaget continually salutes an art that not only celebrates creativity and breakthroughs, but like itself is committed to showcasing works of beauty to the world.

This year, it further broadens its affirmation towards Asia’s movie industry by pairing up with the Hong Kong Film Awards, and now the collaboration with famed Chinese actress Li Bing-Bing at the Cannes Film Festival is further proof of the brand’s commitment towards the magical world of film-making.