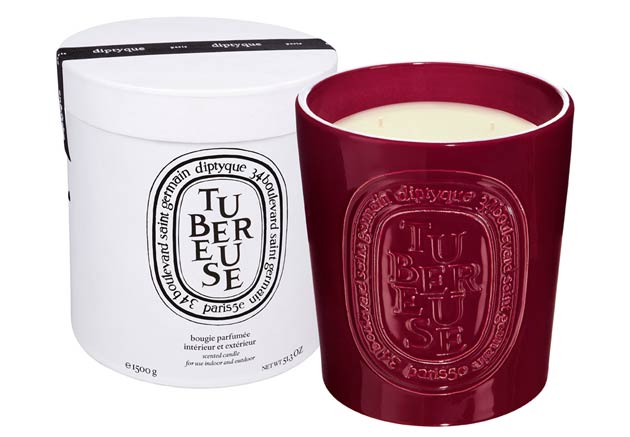 The Diptyque story began in Paris at 34 Boulevard Saint-Germain with, at its heart, three friends driven by the same creative passion.

Christiane Gautrot was an interior designer, Desmond Knox-Leet, a painter, and Yves Coueslant, a theater director and set designer. The first two collaborated designing fabrics and wallpaper for Liberty and Sanderson. They were joined by the third in 1961 and opened a shop to display their designs. Yves became the administrator and consultant; Desmond and Christiane were the artistic soul.

Bit by bit, with finely honed taste, the trio transformed the site into a one-of-a-kind setting, a kind of stylish bazaar where one found surprising articles unmatched in Paris, mined and conveyed home by the trio over the course of their travels.

The Latest Scent – Tuberose, a floral scent
At dusk, the fragrance of these heady flowers intoxicates, captivates and beguiles.The Art of Wax finds a new form of expression at Diptyque in giant candles for “indoors and outdoors”. Diptyque teamed up with Virebent, a well-known porcelain manufacturer established in Lot, France in 1924, to make its “indoor and outdoor” scented candle. It chose earthenware for its rustic touch and hand-crafted look, and because it embodies and brings to life the brand’s emblematic oval. This Diptyque candle is made exclusively by hand, and takes no fewer than nine distinct stages.

The clay, a mix of earth and water, is poured into a plaster cast where it curls into the oval-shaped hollow. Several hours later, it is baked at 980°, coated in -white, grey or black- enamels (depending on the fragrances), inside and outside, and the two brands are stamped on the base. The last firing at 1280° melts the enamel into the sandstone, hardens the pot, and adds that subtle finish.

In order to unleash the perfect effect, “indoor and outdoor” candle is a blend of first-class waxes specifically amalgamated and then assessed when hot and cold by wax experts. The waxes are hard, their sources controlled and of mineral origin on occasion enriched of a few plant-based waxes. Choosing the right wick is also essential to ensure each candle burns consistently and flawlessly. There are 4 wicks for this sandstone edition which are cotton braids with cellulose cores.

The Ritual
Diptyque has nurtured its own ritual to unleash the scents of its candles: The wax is tapped from the glass on a cushion to release the fragrance. That is how to catch a glimpse of the fragrance that the candle will set free once you light it.

Precautions & Instructions
Here are a few tips to enjoy your scented candle safely, for a long time, without altering its quality (this candle will burn for approximately 90 hours): Let it burn for at least one hour to let the wicks soak up the paraffin and burn properly. Doing this will form a homogeneous melting pool and avoid the wax hollowing out later on.

Regularly re-centre and trim the wicks with special wick-trimmer once you blow them out.

Some Japanese Vending Machines Dispense No End of Surprises