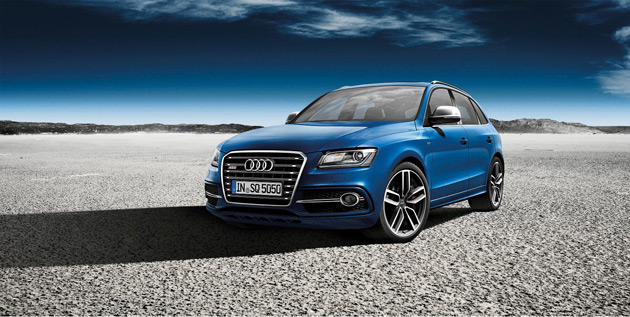 With 313PS and 39mpg, the Audi SQ5 TDI is the new top model in the Q5 model series and also the first S model in the history of Audi with a diesel engine. 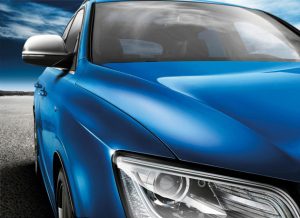 Now an extra dash of exclusivity has been added to its potent formula as the SQ5 TDI Audi exclusive concept – a limited edition version created by high performance division quattro GmbH.

The performance SUV will showcase new design features in the interior and an exclusive exterior finish in a limited production run of just 50 vehicles beginning in the first quarter of 2013.

The SQ5 TDI Audi exclusive concept is finished in stunning Aral Blue crystal effect, a shade which was specially developed for this limited production model and which conveys an amazing feeling of depth. As with every S model from Audi, the exterior mirrors are in aluminium look, and xenon plus headlights with LED daytime running lights are standard. The four exhaust tailpipes dominate the rear of the vehicle. 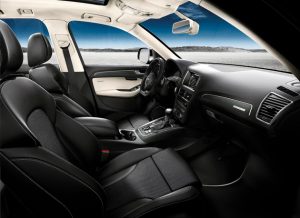 The interior of the SQ5 TDI Audi exclusive concept incorporates striking contrasts: The leather multifunction sports steering wheel and the gear lever gaiter in black Fine Nappa leather are accentuated with contrasting stitching in snow white, as are the centre armrest and the instrument binnacle cover. A special highlight is the black sport seats covered in Fine Nappa leather, which also feature contrasting stitching in snow white and black, woven leather in the centre section of the seats. The SQ5 TDI Audi exclusive concept marks the first time that woven leather has been used in a production vehicle.

The Alcantara headlining, the blind for the sunroof and the inlays and applications in the doors are finished in snow white. The inlays are natural grain ash. The open-pored veneer has been specially treated to emphasise the grain. The door trims and the entry sills sport Audi exclusive badges.

Production of the SQ5 TDI Audi exclusive concept is limited to 50 examples, and their price in Germany will be €92,000. The SQ5 TDI on which this special edition is based will open for order in the UK later this year priced at approximately £44,000 OTR.