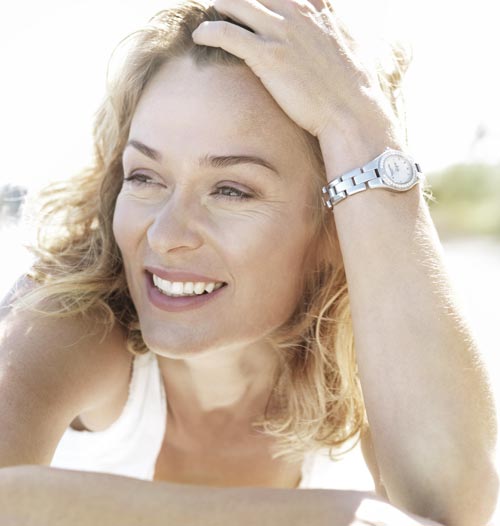 This year marks the start of a new chapter in the Swiss Maison d’Horlogerie, Baume & Mercier’s history. Since 1830, Baume & Mercier has been designing watches of the highest quality endowed with timeless appeal that echo the Maison’s values of authenticity and continuity. It was a natural evolution for Baume & Mercier to turn to the seaside to embody its new area of expression where the charms of discreet living are appreciated.

Line Verndal, one of Norway`s talented actresses, has become known not only for her roles on television and in film, but also for her natural and honest style. Whether she is attending a premiere on one of her films or just taking a walk by the rough, Norwegian seaside she prefers clean, classical lines and shapes with understated elegance reflecting the Baume & Mercier lifestyle. As a result, Baume & Mercier is pleased to announce its relationship with Line Verndal as a new friend of the brand.

“Like Baume & Mercier, I embrace the moments. As an actor, being present in the moment is everything,” says Line Verndal. “Baume & Mercier is not flashy, but discreet, elegant and classic, and I feel that their values match mine. As Baume & Mercier claims “life is about moments”, I strive to remember and preserve special moments, both in my professional and my private life.”

Verndal has a wide specter of experiences within film, television and theatre and has played in tragedies, comics and musicals. She has done characters in plays by Shakespeare, Dostovjevskij and Ibsen, but is probably best known for her role as “Marit” in the television series “Himmelblå”. She has also starred in multiple films including “Limbo”, “Kvinnen i mitt liv” and “Varg Veum, Dødens Drabanter”. Line is currently preparing for a Canadian film scheduled for release in 2012.

With her passion for philanthropy, Line is also ambassador for the humanitarian organization Care. At least one of Baume & Merciers watches will be auctioned off to raise money for this organization. “Care is helping women to help themselves, and this is why I want to support them, says Line Verndal. “It is not just giving, but supporting something for the future.”

Baume & Mercier
Founded in 1830, the Swiss Maison d’Horlogerie, Baume & Mercier, has had a proud track record of producing watches that consistently embody an ideal of excellence and affordable luxury for everyday living. Today, the brand’s four key collections include the classically feminine Linea for women, the sport-elegant Capeland for men, the timeless Hampton for both men and women, and the Classima, perfect for all occasions and enhanced with new 2011 additions. The dawn of 2011, marks the start of a new chapter in Baume & Mercier’s history. The brand’s new universe is now represented by Seaside Living in the Hamptons, which corresponds to the genuine values of sharing, authenticity, and relaxed elegance. The Hamptons have inspired Baume & Mercier’s new claim: Life is about moments. Baume & Mercier’s mission is to be the natural companion of life’s celebrated moments such as a birthday or anniversary, a graduation, a first job or a family reunion, the kind that warms our hearts in any culture and on every continent.