The founders, Erick Herzberger and Luc Bernole, have set up LISA Airplanes with the aim to innovate in the design and in the commercialisation of aircraft to become a major international aeronautical manufacturer. They are surrounded by a multidisciplinary team of know how in aeronautics, hydrodynamics, mechanics, industrial and marketing. Eric and Luc have established collaborations to meet their best qualities of design, manufacturing and finishing, including prestigious technical laboratories like ONERA, well-known polytechnic School and aeronautical expert companies. 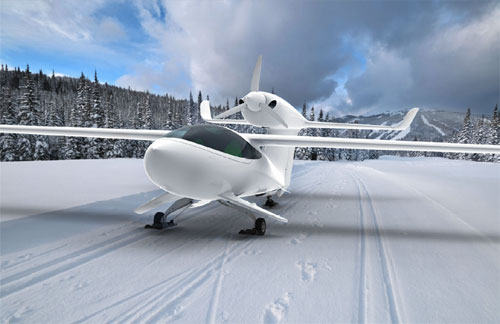 LISA Airplanes is more than an aircraft manufacturer, with aims to develop a new lifestyle for aviation enthusiasts and lovers of exclusive sports. In this way, the company is developing an innovative concept, the Multi-Access™, a revolutionary system that allows its airplanes to land with the same comfort whether it be land, water or snow without altering performance.

Besides, enrolling in a sustainable development approach, LISA Airplanes’ purpose focuses on providing low fuel consumption aircraft. In practice, AKOYA’s aerodynamics shape generates less drag in flight and contributes to ensure better performances. Always keeping innovation in mind, LISA Airplanes undertakes to move even further with the development of a similar aircraft to the AKOYA, this time equipped with an electric motor powered by solar energy and hydrogen via a fuel cell, called Hy-Bird.

LISA Airplanes claims a special place in the world aviation and wants to be associated to marine and luxury environments. Its offer is addressed to both aviation enthusiasts and outstanding recreations lovers, who have a strong desire for freedom. Finally, LISA Airplanes wants to become a major player in the market of light aircraft in an international level and confirm its high range positioning.

Since 2007, the company has been working with collaborators from all countries and participates in international exhibitions such as the Monaco Yacht Show (Super-yachting) EBACE (business aviation) or Top Marques (high-range cars). In addition, Danish Yachts and Courchevel, recognized worldwide, are two of LISA Airplanes partners who emphasize the influence of this company on the world stage by various events.

The Akoya, a unique light luxury airplane able to land on either ground, water or snow, offering previously unthinkable transportation possibilities. After presenting the aircraft on several occasions in France, its home country, LISA Airplanes now brings this innovation to the international market.

About the Akoya
The AKOYA was developed with the aim to offer a totally different product on the market for light aircraft, combining high performance, comfort, design and energy savings while providing maximum freedom. LISA Airplanes has chosen the ultralight classification for freedom and comfort of pilots, allowing them to benefit from many technological innovations. Yet it claims a special place, justified by the versatility, performance and comfort of AKOYA which are far superior to other ultra-light aircraft. AKOYA concentrates many assets which make it different from any other aircraft. Recognizable by its design, AKOYA is a unique mean of transport. It can take off and land on land, water and snow with the same ease. This is the Multi-Access Concept. Entirely made of composite materials and aeronautics metallic alloys, the fine lines of AKOYA and its light weight offer better aerodynamics performance. 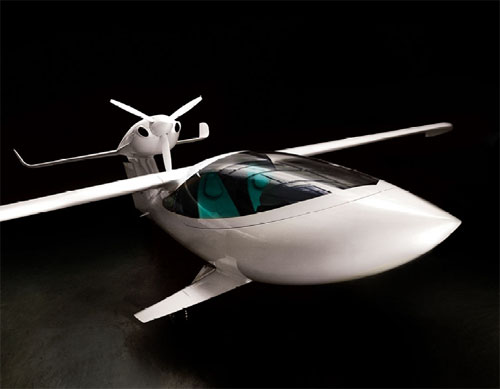 Multi-Access™ : Water, land and snow
The patented Multi-Access technology enables the AKOYA to land with the same agility on water, land or snow without any prior modification of the aircraft. This unique innovation is based on a combination of retractable landing gear, Sea foils and Skis-in.

Thus, for those who have an AKOYA, taking-off near your yacht, flying to your private property, or changing direction mid-flight and visiting snowy surfaces is now possible. AKOYA brings flying lovers and water enthusiasts together. The Multi-Access guarantees a real pleasure to pilots. AKOYA’s innovative configuration was imagined to respect increasing desires of flexibility and liberty.

Sea foils
The Sea foils technology – wing-like structures under the fuselage that provide lift – lifts the fuselage out of the water at very low-speed and dispenses with the need for a step or hull. The airplane can accelerate and take off over short distances while keeping good stability and manoeuvrability.

Folding wings
The AKOYA features power-assisted pivoting wings. This system allows the storage of AKOYA in the garage of a home or on a yacht.

A range of 1100 km
Coupled with Multi-Access, AKOYA’s 1100 km of autonomy, offers its passengers a range of possible destinations. Perhaps therein lies the main constraint of the owner of an  AKOYA: choose his next destination!

A light and aerodynamic framework
The AKOYA’s smooth and flowing lines were engineered for better aerodynamics. Its carbon frame is both strong and very lightweight. These features give the AKOYA a very good performance.

An “all terrain” plane for performance without compromise
Unlike other seaplanes and amphibious aircraft, the AKOYA is equipped with Sea foils that do not affect the aerodynamics of the aircraft. So the AKOYA becomes the first aircraft that’s both agile on the water and fast in the air.

The aesthetics of AKOYA is one of the many performances and innovation, which seduces immediately. LISA Airplanes pays
particular attention to the design and develops a catalogue with a range of personalization accessories. 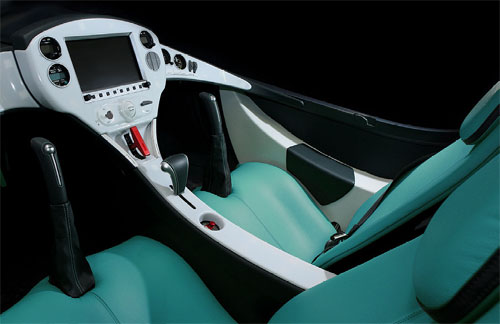 Cockpit : Comfort and style
Because flying should be fun, LISA Airplanes engineered the AKOYA to be functional. The cockpit was developed by LISA Airplanes’ designers to give greatest comfort while facilitating flying: a spacious cabin, comfortable and ergonomic seats, designs and materials carefully selected to blend aesthetics and comfort in any season.

A panoramic view
For your enjoyment, the AKOYA’s tinted canopy, in front of the wing, gives you a full 180° view.

From design to acoustic comfort
The framework of the AKOYA, with its clean lines, was engineered to combine performance, design and acoustic comfort. In addition to its sound suppressor, the engine and transmission unit are placed at the rear of the aircraft, distancing any engine noise and propeller-generated turbulence from the cockpit, making the AKOYA’s interior quieter than a conventional plane.

Anticipation of obstacles
The panoramic view offered by the Akoya’s canopy facilitates visual flight (the common practice in light aircraft), providing a general view of the airspace around.

An extended range of action
The sleek aerodynamics of the AKOYA makes it insensitive to wind gusts and gives it an excellent lift-to-drag ratio. As a result, in case of engine failure, the pilot has a superior range of action in which to find suitable landing field. In addition, thanks to Multi-Access technology, the potential landing areas are tripled: water, land or snow.

Equipments to deal with any situation
To keep the pilot safe in even the diciest situations, the AKOYA has the ultimate safety device – a built-in parachute – which will take the passengers and the plane safely to the ground. Finally, all of the AKOYA’s equipment and functions were designed to optimize safety (e.g., an ignition interlock system, position indicators, wing position locking system, etc.). 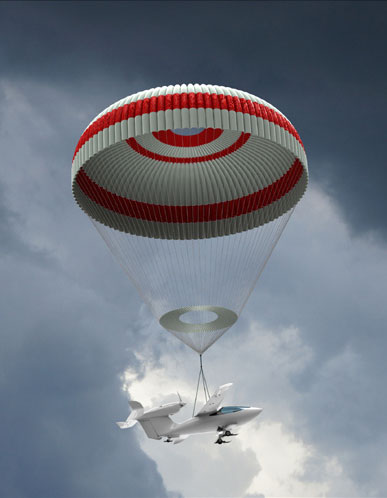 An aircraft designed according to the standards of the general aviation!
The AKOYA is designed and manufactured to comply with the European Aviation Safety Agency’s Certification Specification for Very Light Aircraft. As a result, the framework and mechanical components of the AKOYA are made by manufacturers specialized in aviation. Quality control and monitoring of the planes are conducted in LISA Airplanes’ final assembly hangar, ensuring optimal quality and reliability.

Akoya at a glance
• Top-of-the-range two-seat aircraft
• The only aircraft able to land on LAND, WATER and SNOW without any prior modification
• Seafoils (LISA Airplanes’ exclusivity) bring agility, comfort and safety on water
• Skis-in on retractable gear allow landing on snow
• Folding wings to stow the aircraft in a garage or on a yacht
• Landing and take-off in 600 feet on land
• Panoramic vision at 180°
• Aircraft global parachute for safety
• Consumption at economic cruise speed : 6,5L/100km
• Maximum speed: 250 k m/h
• Maximum Range: 1,500 k m (at economic cruise speed)
• 1st flight: August 2007
• First deliveries: Summer 2012

Price and Training
To ensure that the concept of recreational aviation takes on its full meaning, LISA Airplanes includes tailored services in the €300,000 (excluding tax) sales price.

These services include pilot training for the three types of landing, personalization of the aircraft, three years of maintenance and full-time customer assistance.