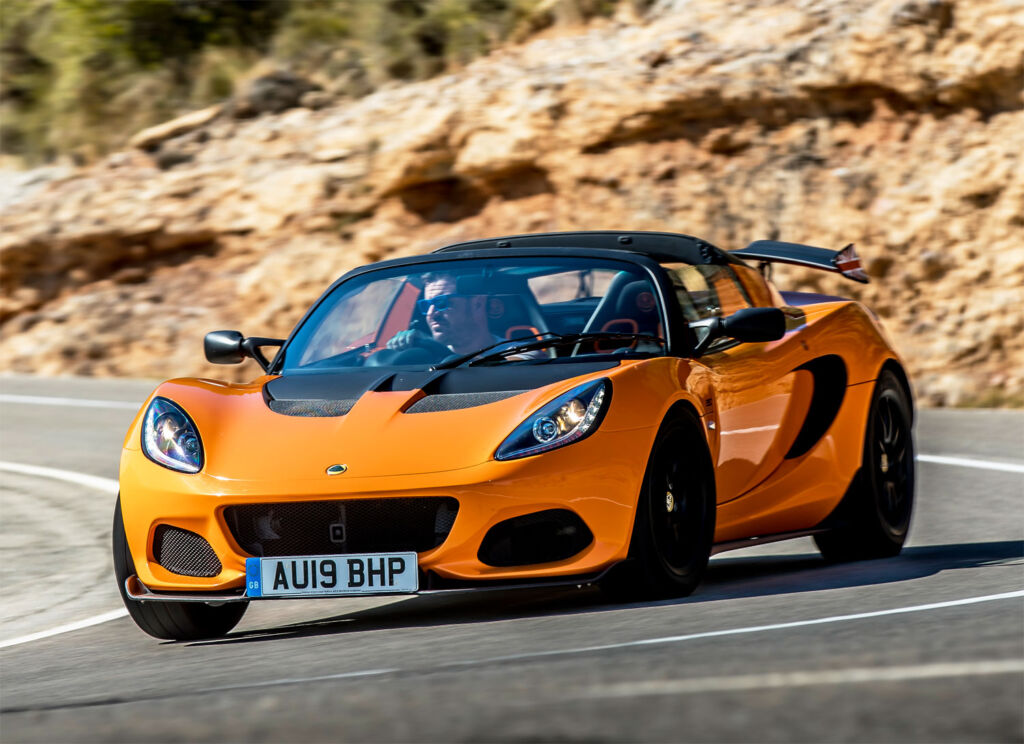 On the outside
When peering at the Lotus Elise Cup 250, it’s almost more race car than a sports car, and is perfectly suited to the track environment, as it is to the road. Elements that give this away are the downforce-inducing front splitter, the pronounced side scoops, the arc-shaped rear wing with Union Jack tips, highlighting the car’s ‘designed and built in Britain’ status, and the central tailpipe (available with a stainless steel or titanium finish) that sits under the rear diffuser.

When it comes to configuring the exterior, there are two solid colours to choose from (i.e. red and yellow), and a further 21 metallic, premium and pearl options, including the striking orange shade of our test car, which was the very subject of the press shots. 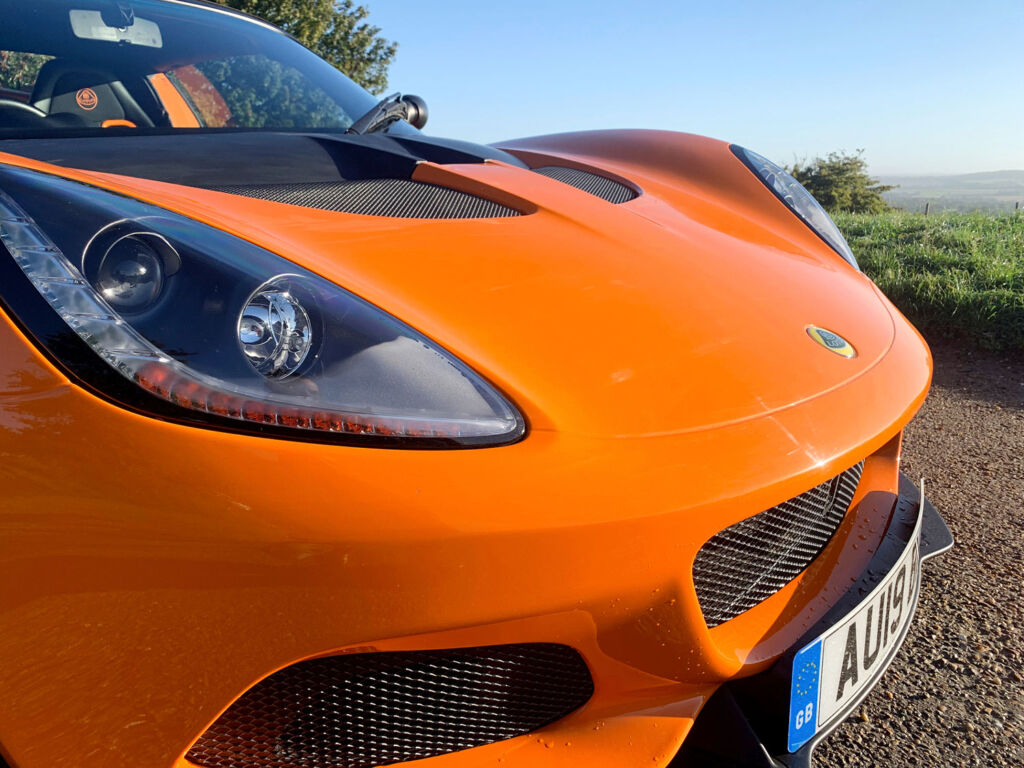 The lines and curves of the Lotus Elise Cup 250 are a work of art, not just from an aesthetics point of view, but it’s easy to see that every detail serves a precise function, rather than having merely been styled to look pretty. For example, the gloss black 10-spoke alloys and polycarbonate rear screen have been chosen to save some vital kilos, and the use of titanium, aluminium and carbon fibre plays an important role in enhancing the car’s performance, and for the delivery of an optimal weight distribution. 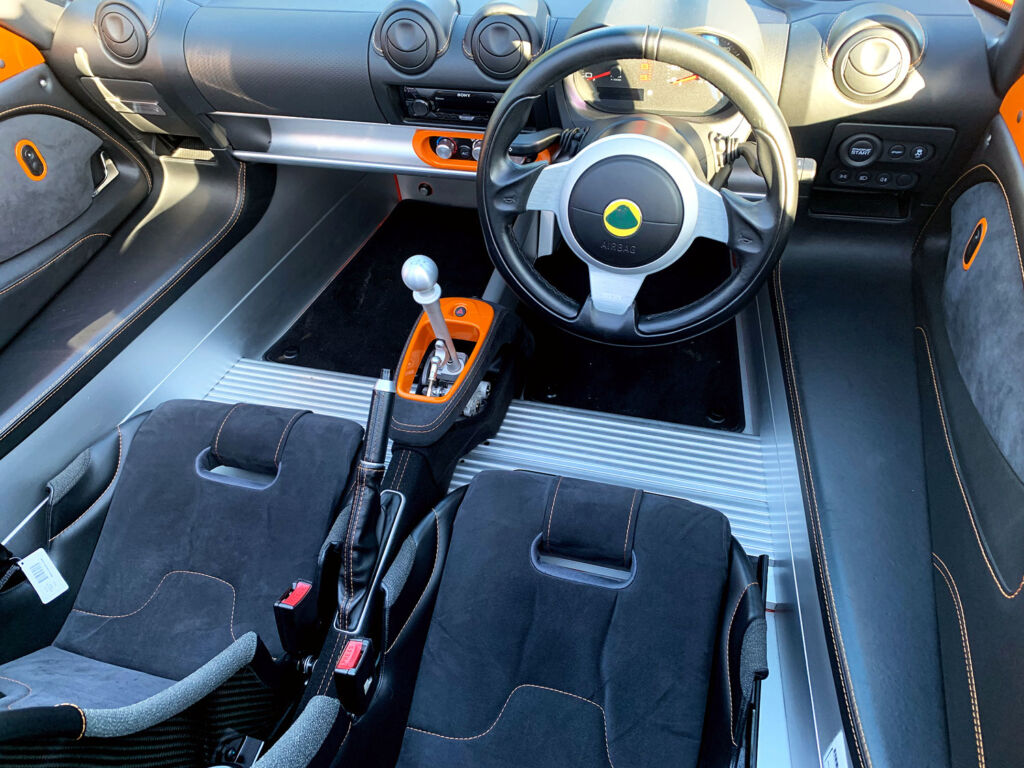 On the inside
First thing’s first, there’s no graceful way of getting in and out of this car, as you haul your bottom and legs over the wide sills. You’ll then be greeted with an interior that’s relatively sparse, but functional, as the design of the Lotus Elise Cup 250 has been heavily influenced by the track. The carbon fibre sports seats, which have elegant cut-outs in the headrests, are furnished with black Alcantara® and orange contrast stitching, a theme which also applies throughout the cabin.

Although not plush with padding, presumably to keep the weight to a minimum as per the renowned Lotus philosophy instigated by founder Colin Chapman, they are very comfortable and supportive. Covered solely by a thin fabric layer, and as the driving position is relatively low slung, your heels rest on the floor of the aluminium tub, which is visible all around the base of the footwells. 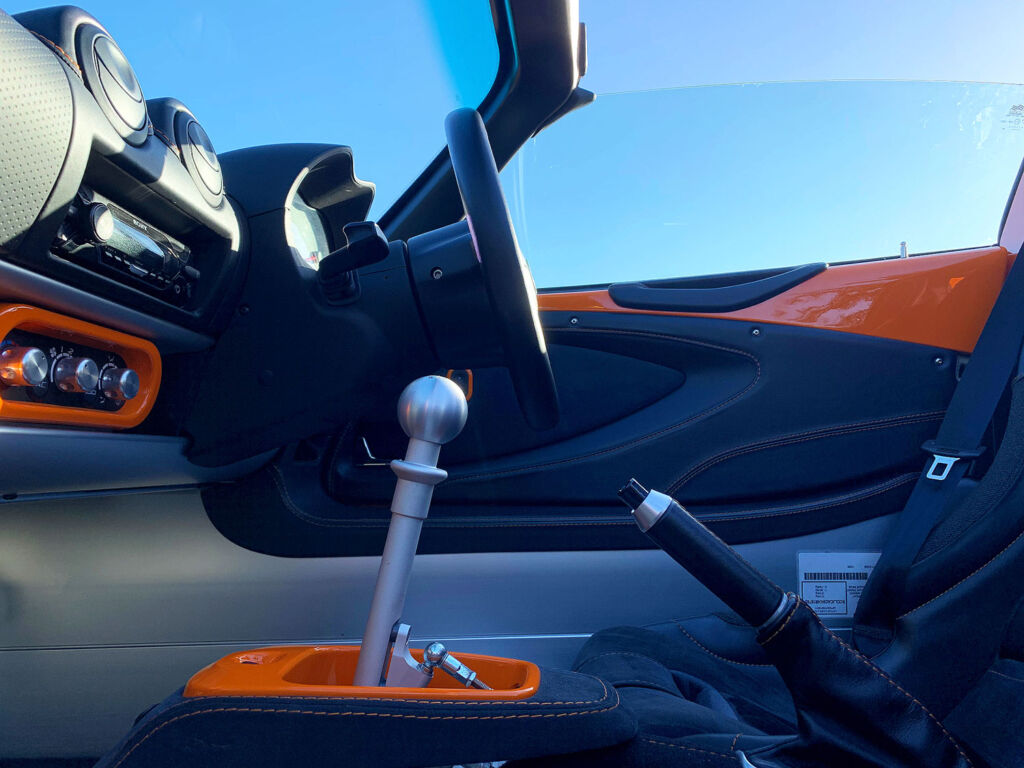 The exposed aluminium gear shifter is a true masterpiece and a standout feature, and it’s not often that you get to see the inner workings of the transmission as you change gear, what Lotus calls an “open-gate design”.

If you’re used to some mod cons, there simply aren’t any. Although this model comes equipped with electric windows, the doors mirrors are adjusted by hand. There’s also no glovebox, and not even any visors to pull down at the top of the windscreen when the light gets very bright, so taking a pair of sunglasses is strongly advised if the weather’s good.

The best it gets is the latest generation Sony in-car entertainment system with iPod® connectivity, Bluetooth® functionality and uprated loudspeakers. In the passenger storage compartment, you’ll also find a USB charging socket tucked away.

Our test car came with the black soft-top roof, although the Elise Cup 250 can be spec’d by buyers with a carbon fibre or black hardtop. It’s easy to operate and, through a series of clicks and clips, it can be removed, rolled up (to be stowed in the boot) and re-applied in a few minutes by the time you have made sure that everything is secure and watertight.