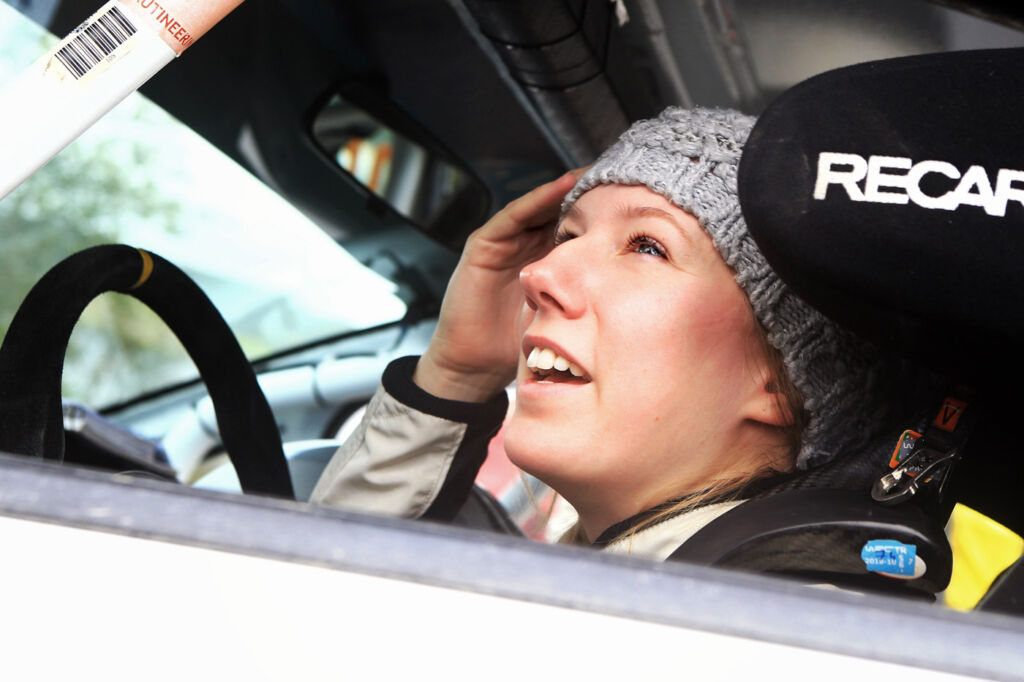 After the sleepless nights of balancing preparing the car and finding sponsors, Louise Cook from Kent made it to Wales Rally GB; based in Llandudno, North Wales for her 13th World Rally start.

The event kicked off on Thursday 3rd October with a high profile ceremonial start in the Liverpool City Centre outside the famous Liver Building.

“Liverpool was a great start, and it’s an awesome city. It is nice to bring the rally to the people and chat with the locals. We sat in a café and listened to Beatles music whilst my navigator, Stefan, made the finishing touches to the pace notes before we drove over the start ramp.”

The dramas started early however with the Liverpool rush hour traffic leading to 7 minutes of time penalties of lateness on the road section and no time to fit the lamp pod to the car as planned for Thursday night Oulton Park stage.

“It was such a shame to start like that after all the hard work. It was tough driving around Oulton Park without the proper lighting, it really helps on all the tight corners, and to add to it, my windscreen steamed up on my side of the car, and I was literally stopped on any left-hand corners asking Stefan if I was still on the road. It’s just so easy to clip something on these kinds of stages, really not nice.”

Early Friday morning saw the rally crews head into Snowdonia’s region of stages. SS2 Cook was struggling with confidence as the 1.6 Fiesta R2’s handling was not as it should be.

“I was really fighting the car, and it just didn’t feel right. I thought it was because it had been a year since I had driven, but during the second stage, I was thinking to myself, there is definitely something wrong on the rear of this car, it’s getting worse.” 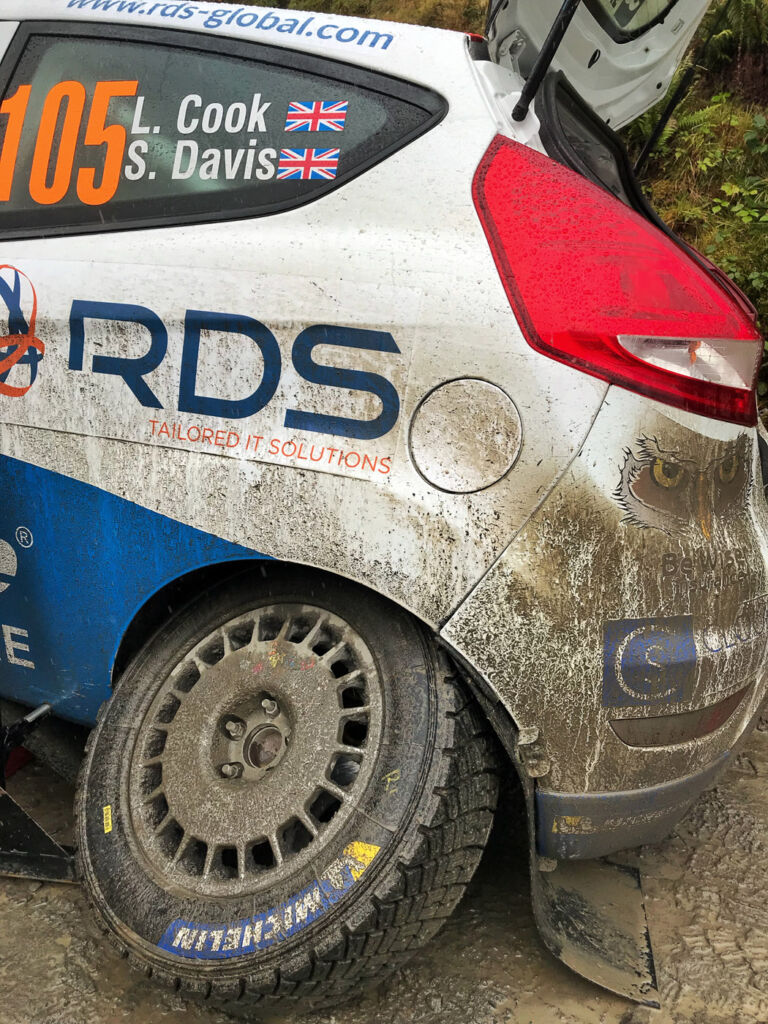 The rear bearing bolts sheered on the very last corner just before the flying finish of SS3 on Friday. The crew limped to the next time control to gain maximum time to fix the car, but there was no way to re-attach the rear bearing. Their time card was handed in which meant they were out of the rally with the hope to re-join under Rally 2 rules the next day.

Rally 2 allows crews to re-join the rally the following day, but for every stage missed on Friday, a whopping 7 minutes of time penalties are added to the crew’s time. Rally 2 rules also allow a 3-hour service window to fix the car in which the team fitted a new rear beam ready for the Saturday stages.

Saturday saw a 5:00 am wake up call for a 6:42 am start time and a 2-hour road section to the first stage down in Mid Wales. 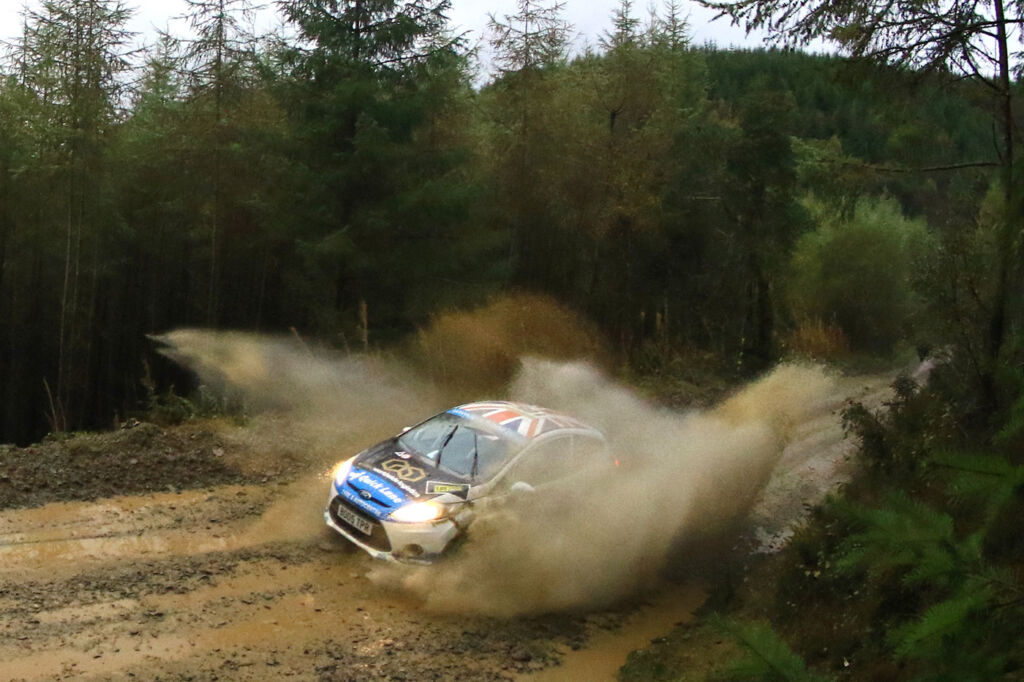 “I was finally un-leashed, I was literally smiling away for the first few km, listening to the notes, I was really enjoying driving after 12 months out of the car. The newly fitted rear beam had a different setting which meant it was a little more lively in the slippy conditions, so we had to adapt quickly.”

Unfortunately, a slow puncture mid-stage on both the first and the second stages of the day affected stage times. Then with no spares left, Cook had to take the minimum risk for punctures in the third stage of the day; Sweet Lamb.

“I was starting to get the confidence back, setting a time in Sweet Lamb of 3.9 seconds per km to the brand new Fiesta R2T which has 50% more torque at 280NM to the 1.6’s 182NM. Having run out of spares, I just had to get through without a puncture, to super rally again was out of the question.”

The crew headed off to Remote Tyre Fitting Zone where four new tyres were fitted and two spares put in the boot. A Re-group in Newtown meant meeting some more fans and a few minutes for an energy boost before the re-run of the second loop of the same stages.

“We ran higher pressures in the tyres to avoid punctures. The car handled more nervously and led us into a couple of spins on the second loop. We were full lock sideways down the road twice, luckily we missed everything, and with muddy side windows it’s so hard to judge where you were on the road, I just held the car at the angle I thought it was supposed to be at, luckily we stayed on the road. I lost a little confidence after this, to be honest. Once is okay, but to happen twice, I wasn’t sure a third time we might run out of luck.” 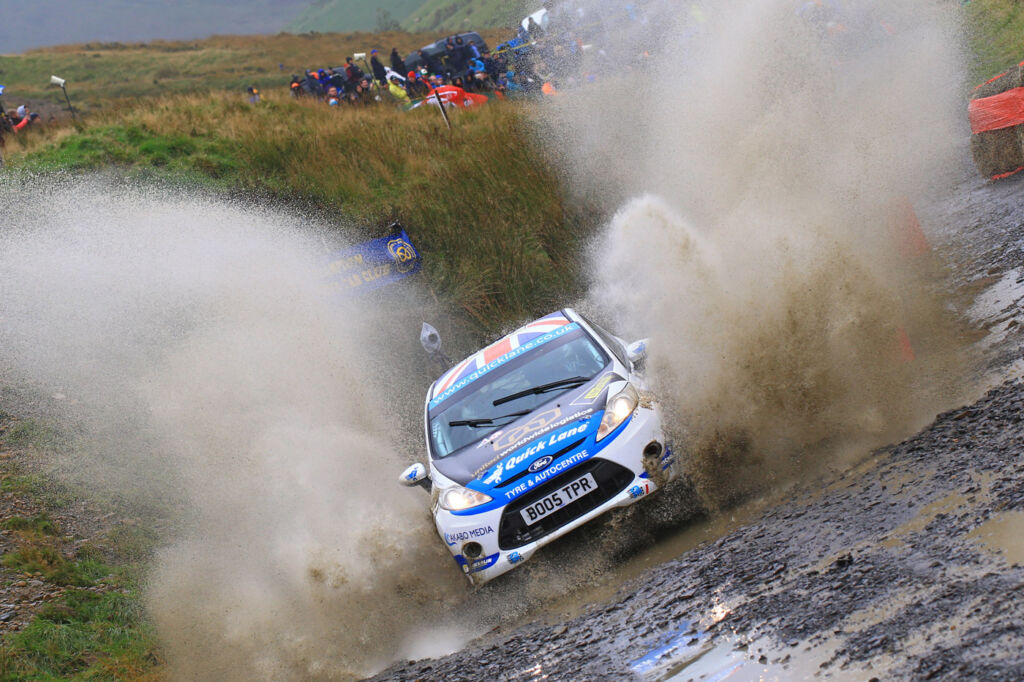 With 148.8km’s of Saturday’s stages completed without any service halts, the crew started the 2-hour road section headed back to North Wales for the short 2.4km Colwyn Bay night stage.

“Saturday was such a long day, 573.48km of road miles and stage miles and with no service at all. It was the toughest day of a WRC event I have ever done, with only 3 hours sleep and combined with no sleep leading up to the event preparing the car and arranging everything, and I was pretty tired by the end of that day.”

The crew headed for a 45-minute service back in Llandudno to ensure the car was prepared for Sunday’s stages.

“Sunday was about drama free and to finish the event for the second time. We had had enough dramas for one rally, so to make any silly mistakes would have just been too disappointing. I drove accordingly. It’s never nice to not fully attack the stages, but there was nothing to gain, only to lose. You have to put your ego to one side sometimes. It was nice to finish the event and drive over the finish ramp; it’s better than being collected from a ditch in the forest. 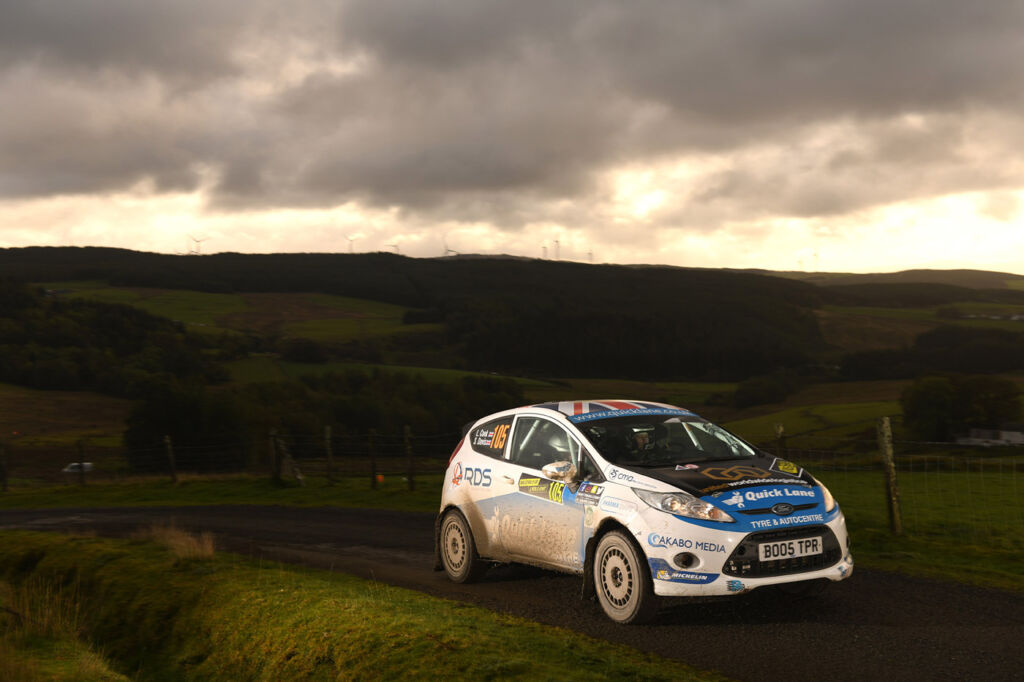 It was great to be back driving, I had missed being behind the wheel, and I am grateful to everyone that made it happen, for the support of Quick Lane UK, RDS Global, United Worldwide Logistics, Michelin, Akabo Media, Cloud Systems, CMA Claims, Pharmaquipe, PSI, Be Wiser, Mouldshop and Spyder Creative. We couldn’t have done it without them.”

Louise Cook – Where and how?

For more information about Louise Cook or to get in contact with her, visit www.louisecook.com