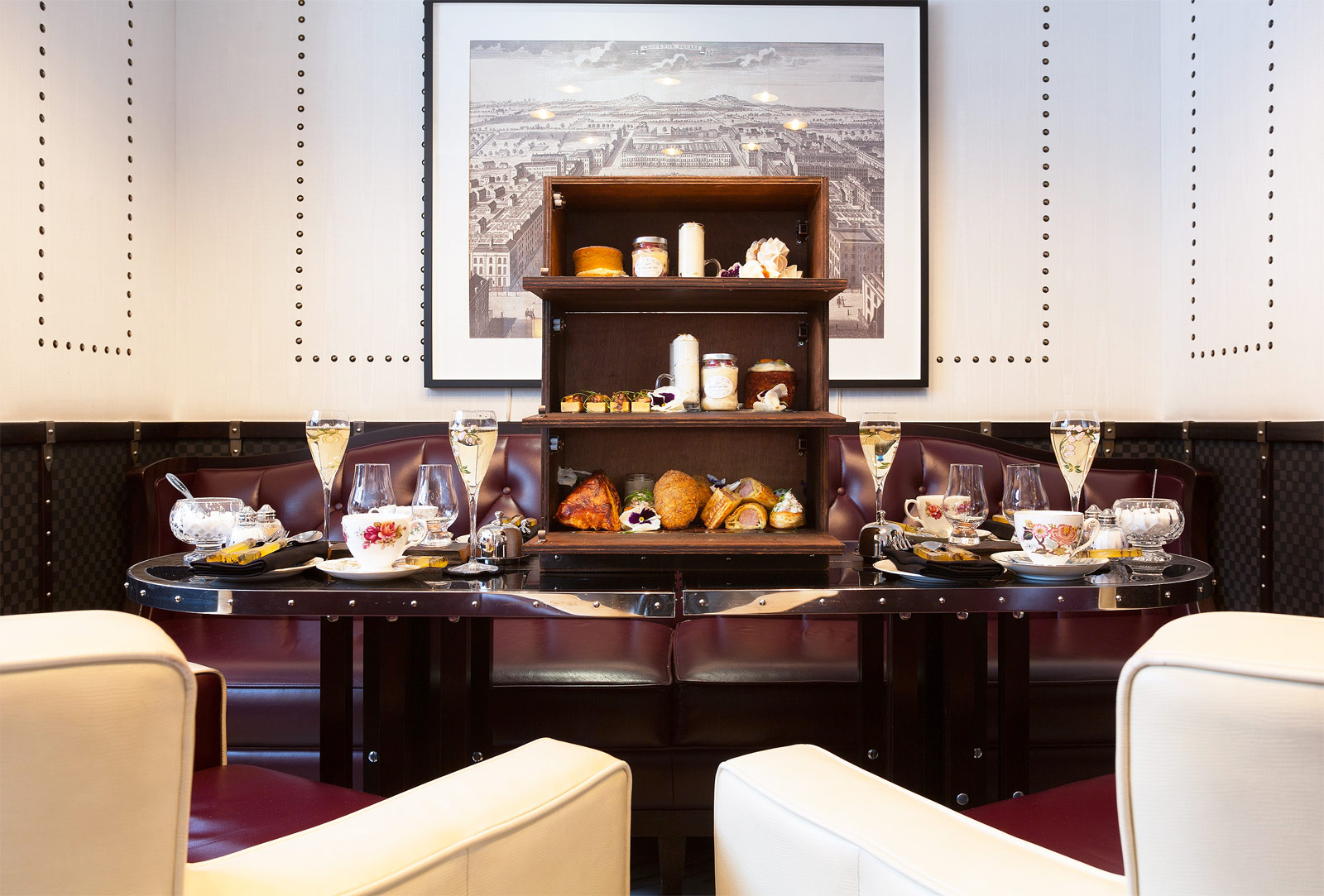 Knocking on the door of The Luggage Room, a well-mannered gentleman answered, and said: “You must be Simon” before we were swiftly guided to our table which had been laid with the finest china, and cutlery featuring ornate amber handles. 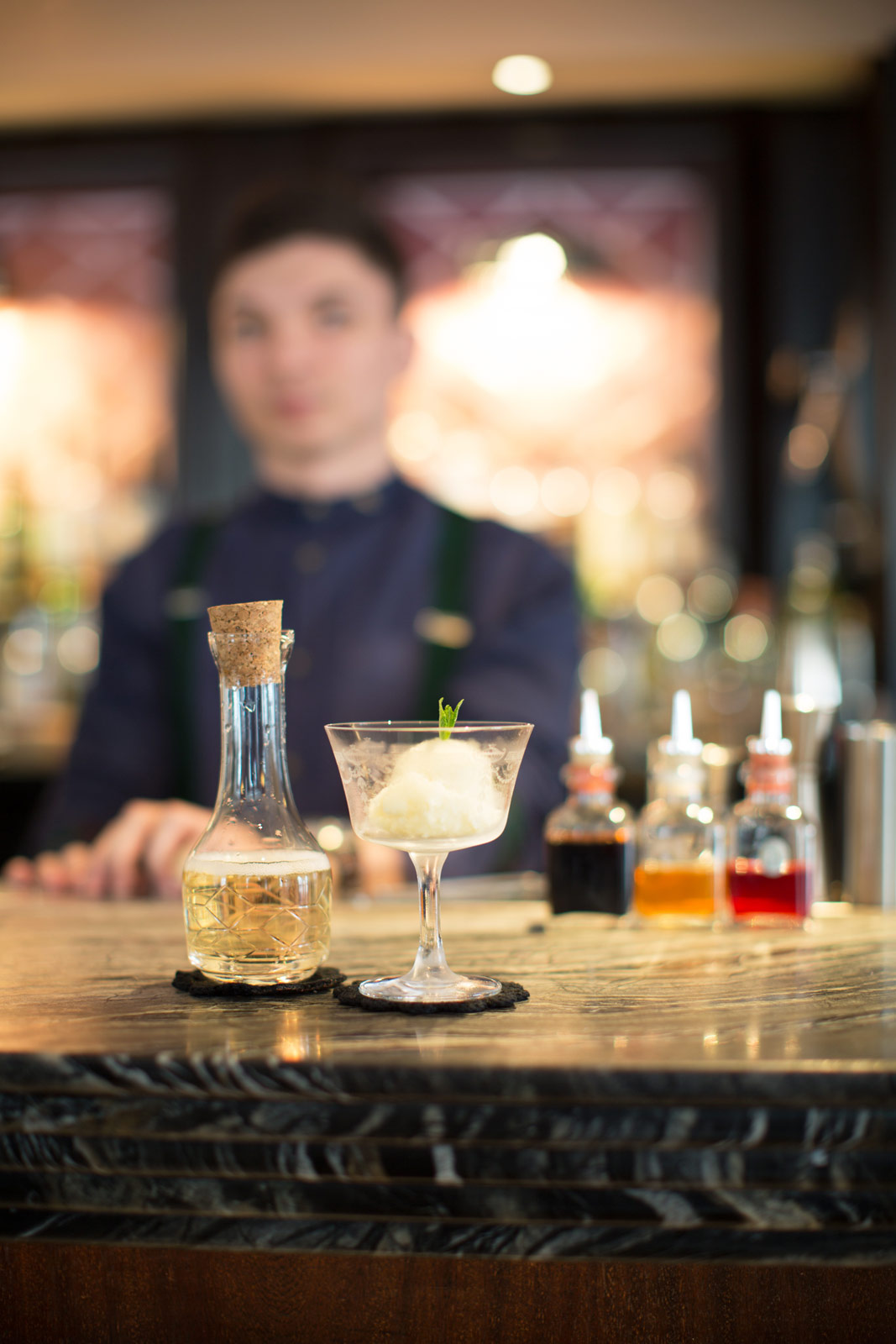 Low Tea harks back to the 1920s when The Duchess of Bedford first began the habit of taking tea and biscuits on a low side table to help stave off her hunger in the late afternoon, before dressing for a late supper. Eventually, her personal ritual evolved into the widely-practiced “Low Tea”, and The Luggage Room has created their own inviting interpretation of this tradition. Dietary requirements are very well catered for, so any part can be easily substituted by the Executive Chef.

To kick things off, we were given the bespoke in-house cocktail menu which lists beverages that have been concocted especially by The Luggage Room to go alongside the Low Tea. I headed straight for the refreshing “Sherry Cobbler” which came with Fino Sherry and a selection of different juices, all served in an ice-cold goblet with a metal straw, a fresh raspberry and curled orange peel. My guest opted for the gin and honeycomb-based “Bees Knees” garnished with a slice of burnt lime, before making his way on to the easily consumed and sweet “Alfonso”, which was made up of Dubonnet (a wine-based aperitif), cane syrup, bitters and champagne. 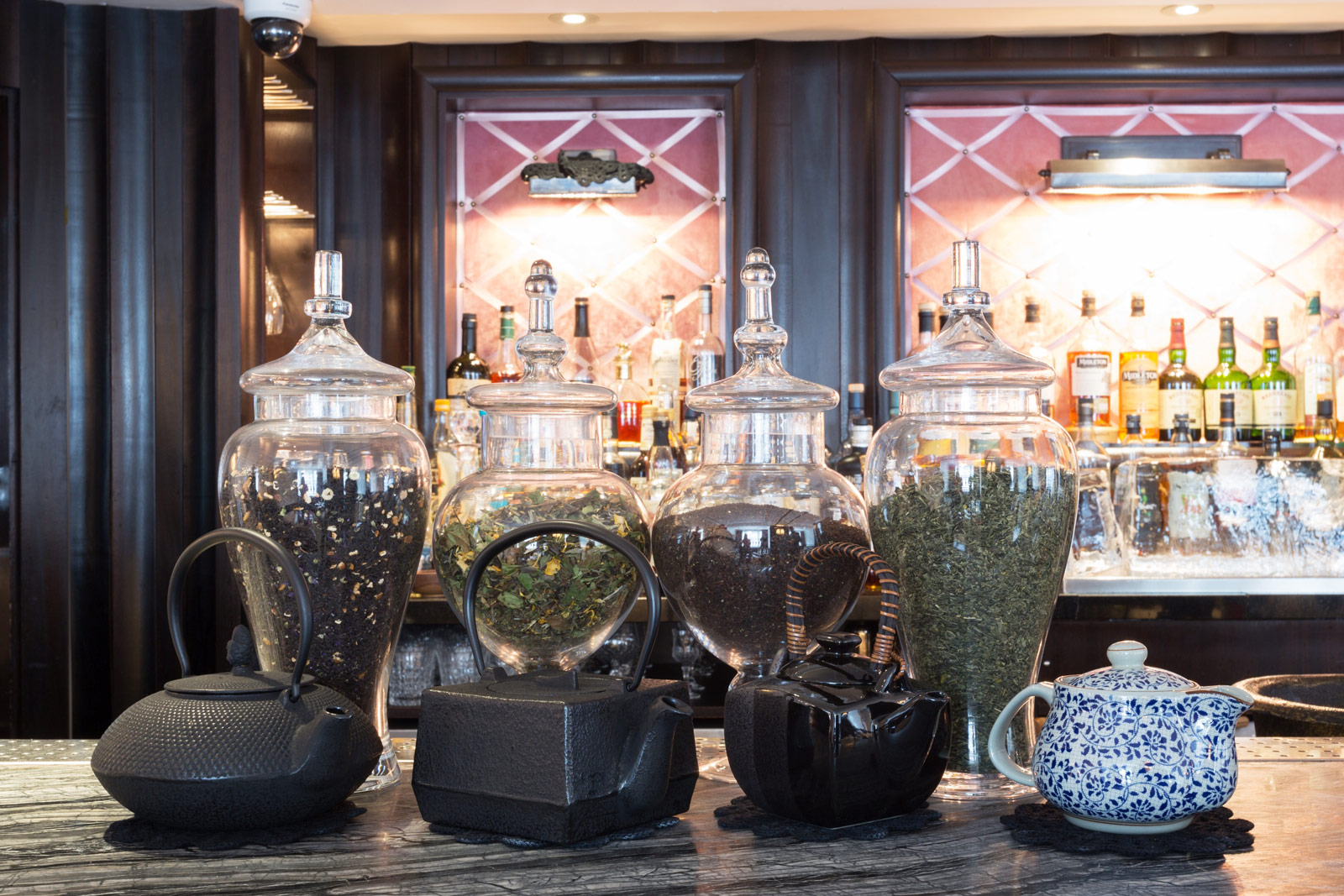 Whilst we were sipping on our alcoholic beverages, our knowledgeable Swedish hostess presented us with a choice of different tea leaves from Camellia’s Tea House, which was arranged in whisky glasses. These spanned from the traditional English Superior Breakfast to the very smoky Lapsang Souchong. There was even a concoction of dried berries with actually no tea leaves to be seen. Each one was introduced with a short story which culminated in the opportunity to smell each variety of tea. I settled on the Chai, a South-East Indian blend infused with cloves and other spices, whilst my guest decided on the Signature Speak Easy Black Tea which came with blue mallow blossom and lemon peel. Both were eagerly topped up as soon as an empty cup appeared.

Low Tea at the Luggage Room is meticulously arranged in a three-tiered vintage-style wooden medicine box, the brainchild of the head bartender and former chef. 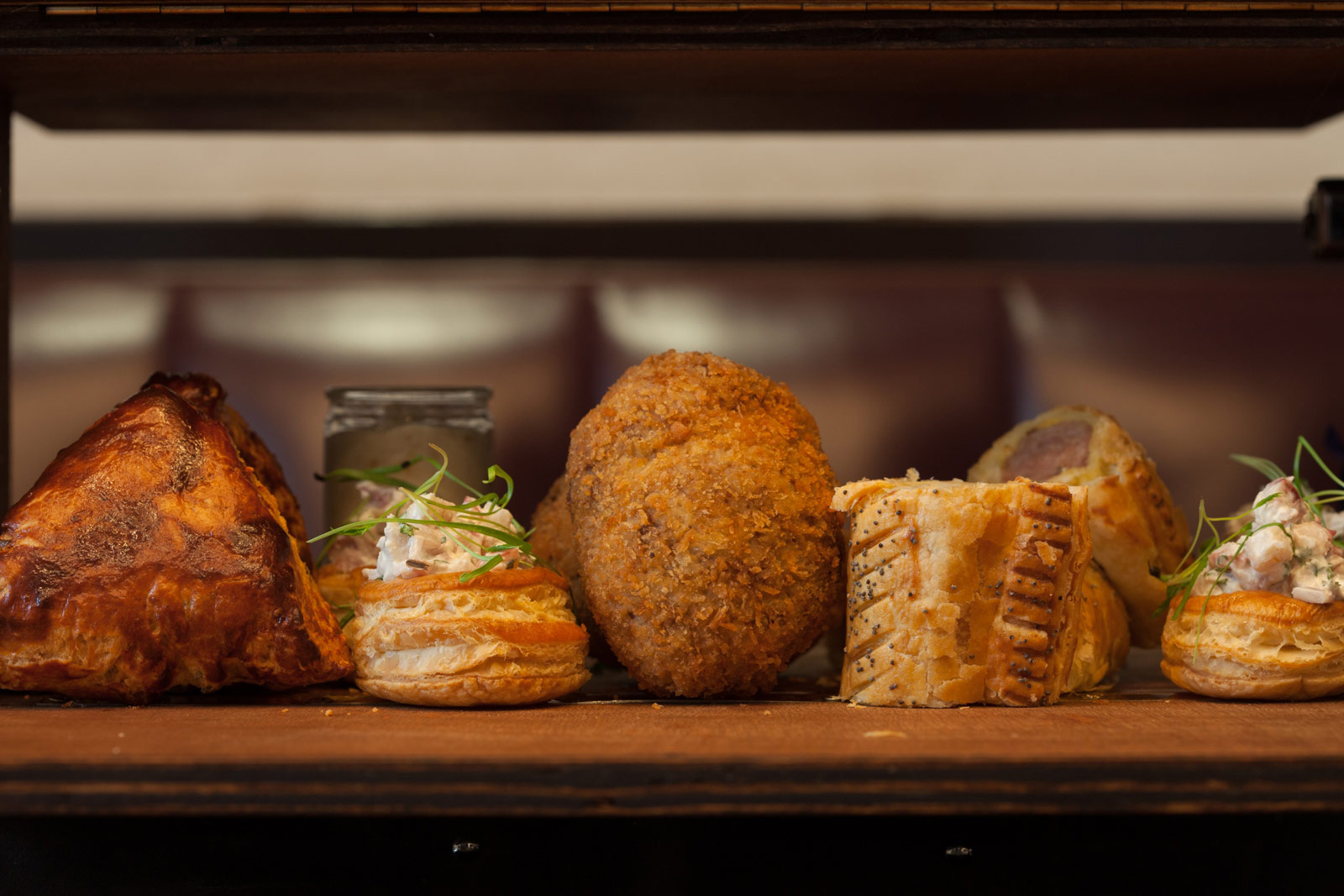 Each section was opened one-by-one by our hostess, first revealing the savoury and flavoursome delicacies, which were namely Lyburn smoked cheddar and sage scones, which came alongside rectangular tarts filled with pickled New Forrest mushrooms, thyme, and crème fraîche. These were amongst my favourites. 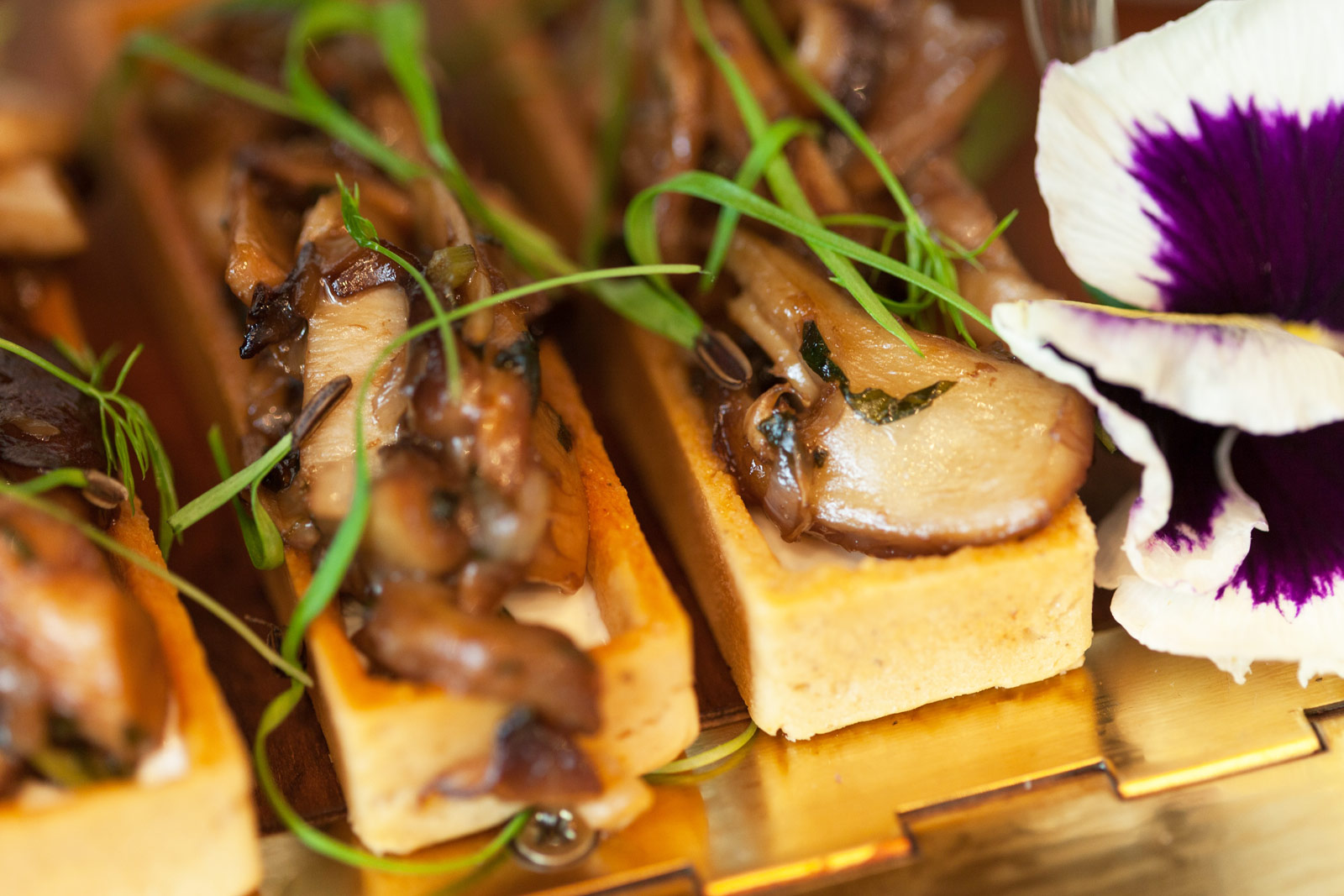 After working our way through the former, it was then time to graduate on to level number two which was adorned with a small round tin of Luggage Room Signature Tea-Cured Salmon by H Foreman & Sons, which melted in your mouth in one quick swoop. This was joined by smoked eel filled vol-au-vents, and the first sweet, going by the name of Victoria sponge which was light and moist.

We were close to being defeated by the time we reached the third and final layer, as we had literally been given a taste of our medicine. On it lay salted caramel meringues, a sumptuous marmalade-infused carrot cake, which were placed next to some more favourites – a scone trifle in a Tiptree jar, and a superb and creamy Luggage Room Limited Edition Plantation Rum Syllabub. If only all medicine boxes were like this… 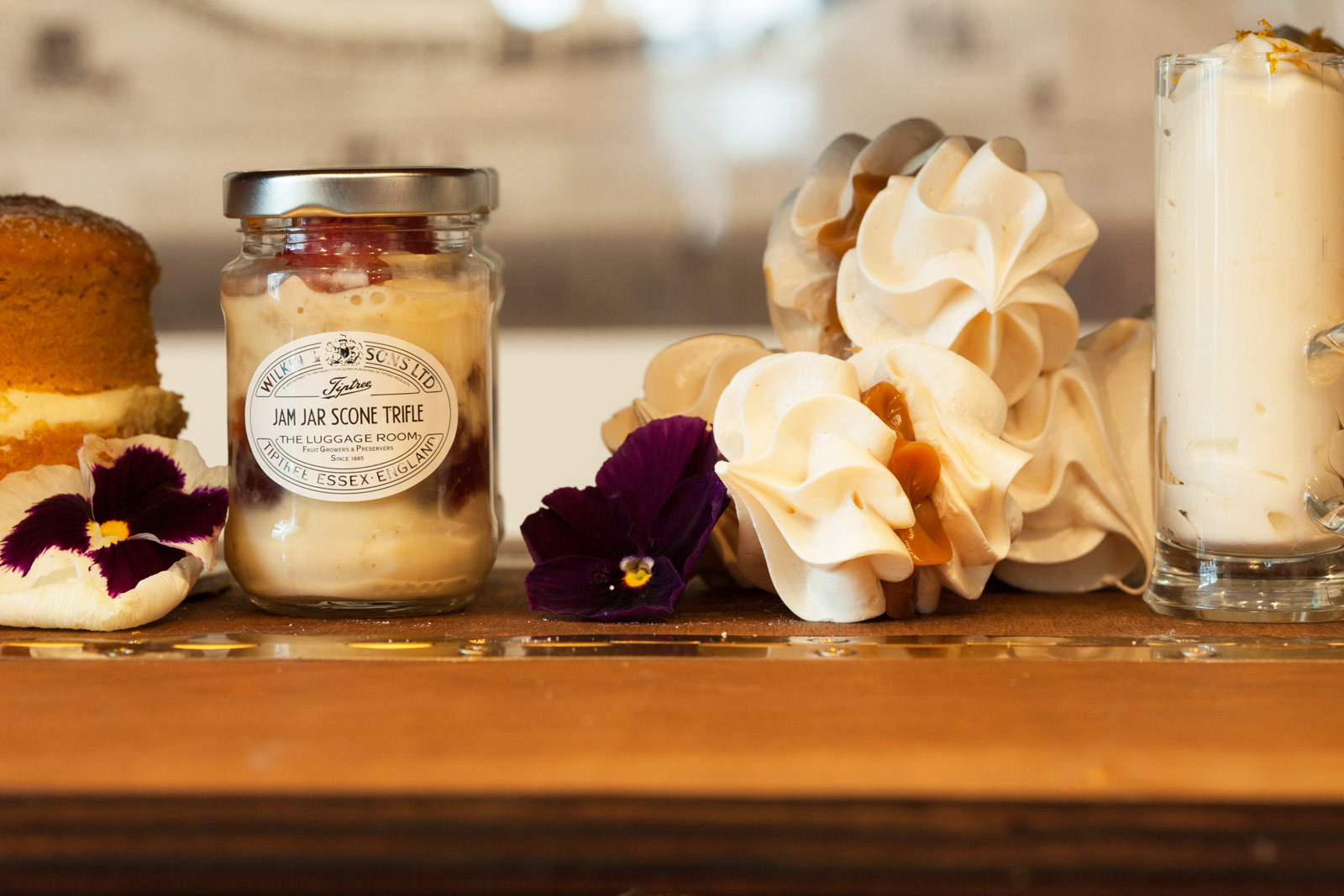 If you are looking for a tea in London which offers the perfect compromise between sweet and savoury, in intimate and elegant surroundings, and with excellent service to match, Low Tea at the Luggage Room is the place to be. And if that’s not enough, it even has its own dedicated Twitter channel!

Low Tea at The Luggage Room – Where and How?