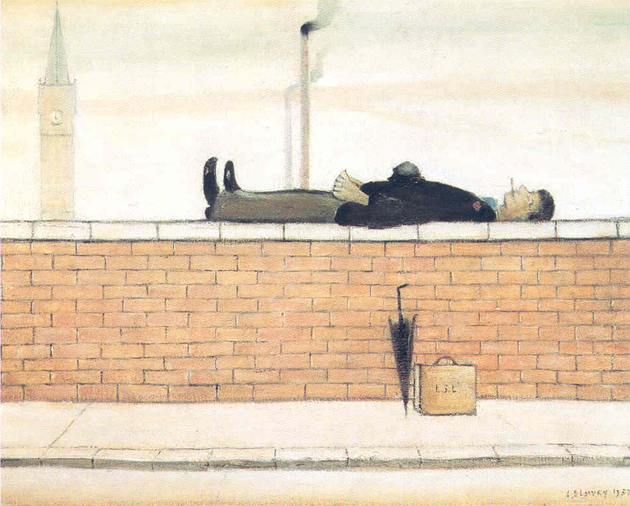 Nine of The Lowry’s most famous paintings have been sent to China for an exhibition at The Art Museum of Nanjing University of the Arts in Jiangsu province.

The loans, which include Man Lying on a Wall (see main pic above), will form part of LS Lowry: Artist of the People, which will run from 14 November – 16 December 2014.

The exhibition has been organised by the Crane Kalman gallery in London and it is believed to be the first time Lowry has been exhibited in China. The same gallery in China recently mounted the country’s first ever exhibition of wok by Francis Bacon.

The Estate of LS Lowry is also loaning four of its works to the exhibition: Man in a Trilby 1960, Children Climbing up Stairs undated, Portrait of Ann 1957 and Girl Standing in High Heels undated.

Claire Stewart, curator of The Lowry Collection, said: “Lowry is an artist who is developing an international appeal. His industrial landscapes seem especially appropriate to be shown in a country like China, which is experiencing extraordinary industrial growth.”

“The loans also provide a chance for us to display nine other works from the Lowry Collection in our permanent Lowry Favourites exhibition.”

Lowry’s work is never far from the headlines. In 2013, Tate Britain held a major exhibition of his work entitled Lowry and the Painting of Modern Life. And earlier this year, Station Approach, Manchester (1960) sold for £2.3m under auction at Sotheby’s having drawn hundreds of visitors to a special pre-sale display at The Lowry.

In October 2014, the gallery housing the permanent Lowry Favourites exhibition was re-named The Andrew and Zoë Law Galleries in recognition of a £1m donation by the couple, who are themselves collectors of Lowry’s work, to the arts venue’s capital funding project.

See more works by LS Lowry by clicking an image below