This is the fourth year that the Swiss luxury watchmaker Piaget has fielded a team in the Triple Crown. Pilará Piaget is one of only eight top-ranked teams allowed to compete in the series. 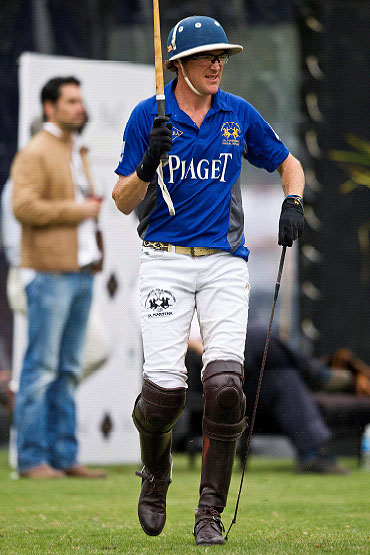 Luke Tomlinson, 32, who along with his family owns the Beaufort Polo Club, was born into a family of polo players in Gloucestershire and was educated at Eton and the University of the West of England, ackowledged as England’s top professional player, he holds an 8-goal handicap in Argentina. Luke tomlinson comes from a family of sporting talent, he has a younger brother and a sister, both of whom are international polo players (Emma Tomlinson as an amateur with a two-goal handicap, and Mark Tomlinson, a professional with a seven goal handicap in Britain).

Luke Tomlinson replaces Tomás Garcia del Rio, originally scheduled to play for Piaget but sidelined with a wrist injury requiring surgery. The English star joins three highly rated Argentine players on the team that Piaget shares with Pilará, the country’s upscale polo, golf and tennis centre: Bautista Heguy, handicap 8; Hilario Ulloa, 9; and Christian Laprida Jr, 8. This 33-goal team is competing against side of up to 39 goals in the Tortugas, Hurlingham and Argentine Opens.

Luke Tomlinson and the Piaget Polo Team at the Tortugas Open

Having won one of their three matches in the Tortugas Open, Pilará Piaget achieved the same record in the Hurlingham Open that ended on November 6th. Piaget’s team won their first Hurlingham game against the higher rated, 36-goal Estancia Grande side by 17 goals to 15. Pilará Piaget led throughout the eight-chukka match and were an impressive four goals ahead in the sixth and seventh periods. Pilará Piaget’s second Hurlingham match, against Chapa Uno, was a nail-biting, seesaw contest that went down to the wire. Having lost the first chukka, the Piaget team took the lead in the second. The game was tied in the third period with Chapa Uno taking the lead in the fourth and fifth. Pilará Piaget went ahead in the sixth and seventh chukka, only to finally fall in the eight, losing by a single goal, 13-12. In their final game of the Hurlingham Open, the Piaget team was faced with the highest rated team in the Triple Crown, 39-goal La Dolfina. La Dolfina dominated the match, downing Pilará Piaget 17-9, and went on to win the tournament.

Pilará Piaget and Luke Tomlinson are now geared up for the Argentina Open being played from November 19th to December 10th in the “cathedral” of world polo, the national stadium at Palermo in Buenos Aires. The Piaget team will play on the first day of this premier tournament against La Aguada.

Argentina’s 10-goal superstar and Piaget Polo’s ambassador, Marcos Heguy, was captain of the Pilará Piaget team until injury forced his retirement from high-goal competition last year. He is now General Director of the team. Piaget is one of the sport’s major sponsors worldwide. The Swiss firm sponsors major events or teams in Argentina, the US, England and China. After the Triple Crown in Argentina, Piaget will field a team in the 26-goal tournaments, including the US Open Championship, at the International Polo Club Palm Beach in Wellington, Florida. Next year Piaget is also expected to be in action again in England, in the Cartier Queen’s Cup and the British Open Championship for the Veuve Clicquot Gold Cup.