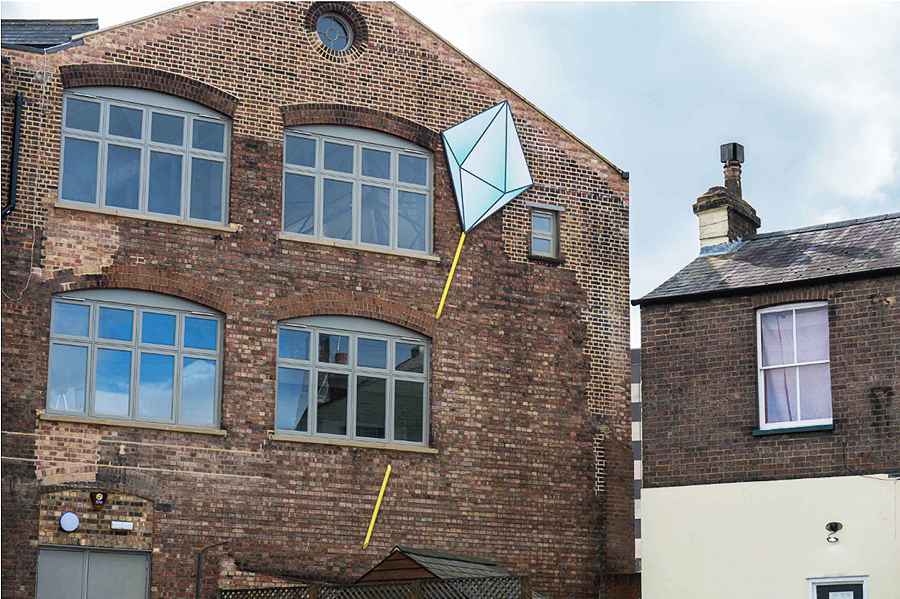 One of the iconic buildings in the centre of Luton’s famous hat district has been adorned with a giant hat pin – a nine-metre artwork created by British artist Tom Pearman.

Pearman has designed the sculpture, called HAT PIN, to celebrate and respond to the heritage of Luton’s Hat industry and broaden public engagement with Luton’s stories and spaces.

The new commission offers the thousands of daily visitors and residents of Luton arriving from the main station, an optical illusion of a three-dimensional hat pin slotted into one of Luton’s key heritage buildings, referencing the hat-making industry of the past and the creative enterprises of tomorrow.

The jewel-like work is made from the traditional sign-making medium of vitreous enamel intersects Hat House, a former hat factory, which has recently been fully renovated into contemporary workspaces for the creative industries.

Pearman, who employs a screen-printed halftone printing technique to create the three-dimensional effect, was inspired by the aesthetic of commercial badge pins and designed the sculptural HAT PIN with research undertaken in the archives of Wardown House, Museum & Gallery.

The project is part of a wider programme of public art commissions by The Culture Trust Luton which includes two giant mural works by the Luton-born artist Mark Titchner, as well as the revered graphic artist Jonathan Barnbook, who has produced album covers for David Bowie, amongst others.

Says Karen Perkins, The Culture Trust Luton’s Director of Culture & Engagement: “HAT PIN is the latest in our public art commissions to celebrate the rich heritage of Luton’s Hat District. Tom Pearman’s unique style has produced a playful response to the history of Luton’s Hat making industry and set it against a building which is home to local hat makers, the Panama Hat Company. We hope the people of Luton, its visitors, commuters and communities enjoy another prominent landmark that celebrates Luton’s past and future.”

Hat House is one of the four buildings that make up the Hat District Creative Cluster, where the Culture Trust, Luton, is transforming old hat factories into vital creative industry workspaces, facilities and communal spaces.

This regeneration programme, which began in 2017, will provide workspace for creative entrepreneurs, artists and micro businesses, support 158 new jobs and will attract more than 135,000 new visitors to the town by 2022.

The Hat District is made up of four buildings: the existing Hat Factory Arts Centre, Hat House, Hat Works and a new build called Hat Studios. This cluster will provide a creative ecology in Luton which will feed and grow talent by bridging the gap between education and cultural career success. The development, which will be completed by 2022, has been driven by The Culture Trust, Luton (formerly Luton Culture), which leads and drives arts and culture across its other venues, museums and libraries.

Given its geographical location, Luton is well placed for such activity. The Hat District itself is a two-minute walk from a mainline train station, which is only 22 minutes from London and can be reached in 10 minutes by car via the M1 and Luton Airport.