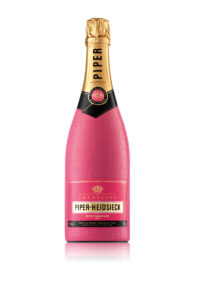 The pink bottle is enveloped in a stunning crocodile-like skin that is a direct replica of the reptile’s scales which was created using the latest thermoplastic elastomer technology. A Nile crocodile was scanned for twelve days and nights, and the image was then laser printed onto a steel mould, which was subsequently filled with molten latex.

Piper-Heidsieck Bodyguard Rosé Sauvage is made from the same award-winning blend as Piper Brut NV with the addition of red wines from the Côte des Bar which gives it its distinctive intense colour and ample fruity nose and mouth.

Structure: A majority of pinots noirs (55-60%) blended with red wines from the Côte des Bar – intense in colour and fruit.

Ample: Over 100 crus in white and blend of crus of reds.

With fruit: Pinots meuniers from the Grande and Petite Montagne de Reims.

Champagne Piper-Heidsieck was founded in 1785 by Florens-Louis Heidsieck. Since its creation, this beverage has always been associated with the greats and the good; from Marie Antoinette, Queen of France, to Marilyn Monroe, who famously claimed that she that she wore only a few drops of Chanel No. 5 perfume in bed, and began each morning with a glass of Piper-Heidsieck champagne.

Not only was Piper-Heidsieck the choice of champagne by many Hollywood Legends and royals, nowadays it is one of the most awarded drinks worldwide under the careful guidance of celebrated winemaker, Régis Camus. Régis has just been named the “Sparkling Winemaker of the Year” for the seventh time since 2004 by London’s prestigious International Wine Challenge.