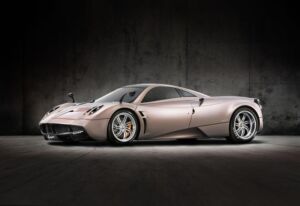 The power and prodigious torque generated by Huayra’s V12 are transferred to the wheels through a transverse sequential seven speed gearbox and a dual plate clutch and the complete gearbox weighs only 96 kg.
Keeping the weight of the rear overhang as low as possible has been a priority as we aim for a neutral behavior at the limit.
A further benefit of this layout is a better behavior of the car during a rear impact. A dual clutch system was evaluated but ultimately not selected as it would have increased the weight by approximately 70kg, thus negating any minor improvement in shift-time.
Xtrac already supplied the gearbox for the Zonda R and so it was the natural choice for the development of a new high performance gearbox. Xtrac’s expertise in motorsports was obvious throughout the design and material selection processes that resulted in the strongest and lightest gearbox possible suitable for road use, with a synchromesh box that offers comfort levels a race car gearbox will never be able to offer. The suspension geometry has been designed to further enhance the sure-footed nature already present in the Zonda on the longer wheelbase Huayra. The individual suspension made with forged AvionAl double A-arms have been tested extensively on the Zonda R programme. Incorporated into the wheel hub assemblies are cooling ducts that connect directly to the support brackets, thus extending the reliability and lifespan of the bearings. Pushrod operated adjustable Öhlins shock absorbers keep everything under control and have been optimized for the dynamic requirements of the vehicle.

“Power is nothing without control…”

Pirelli say “Power is nothing without control” and to assure complete control for the driver Pirelli has developed the bespoke P Zero tires, specifically for the Huayra. The Pirelli engineers were faced with a demanding task, combining road holding for excitement behind the steering wheel and lower rolling resistance to reduce CO2 emissions and fuel consumption. These P Zero tires are built in a dedicated MIRS™ (Modular Integrated Robotized System) facility, dedicated to the production of ultrahigh performance tires and are at the forefront of what is technically possible, suited to top speeds above 370 kph as well as to lateral forces exceeding 1,5 G.

The aerodynamic concept of the Huayra is that of a wing. The vehicle can modify the properties of this wing by varying the front ride height, which can be adjusted dynamically, and by adjusting the 4 control flaps on each of the four corners of the car. The goal is to have a neutral vehicle behavior under all conditions and control body roll via aerodynamic means. The behavior of the flaps is managed by a dedicated control unit that is fed information from the ABS and ECU, which pass information about the car’s speed, yaw rate, lateral acceleration, steering angle and throttle position.  The system improves aerodynamic efficiency in a variety of driving conditions, where a low drag coefficient is not the determining factor. During braking, for example, the rear flaps and the front suspension are raised to counteract the weight transfer and balance the weight distribution between front and rear axles, allowing a better use of the rear brake force. Another vital design tenant for the Huayra project was to ensure clean airflow over the body of the car.  The shape of the two engine air intakes behind the occupants shoulders are a tribute to the supersonic aircraft of the late 1950s and 1960s, but also allow the motor breath without disrupting the flow.

The intake for the gearbox radiator is located between the engine bay window and the carbon clamshell of the rear bonnet, which provides an excellent airflow to the radiator without having a substantial impact on aerodynamic drag. This decision also led to the omission of a rear wing, replaced by the movable flaps. The flow of air through the car was also carefully studied.

The radiators are angled to contribute downforce and provide the best flow for hot air to be extracted. Air from the central radiator is extracted by vents on the front bonnet and trough the front wheelhouses. Air from the side radiators is channeled to ducts cooling the brake discs and wheel hubs.

This air blows onto the brakes at a temperature of approximately 50°C warming the brakes up when cold and improving the first bite significantly. Lateral air outlets behind the front wheels generate a negative pressure inside the wheelhouse providing efficient extraction to lower the drag coefficient and generate downforce on the front.

In addition to the downforce generated by the flaps and body, two high negative pressure areas were designed into the shape of the underbody and the diffuser at the rear, thus enhancing the aerodynamic stability and guaranteeing the Huayra downforce under all circumstances.

As soon as the doors are closed the Huayra transports the occupants to a new dimension; a world that pleases and surprises the senses. Having everything at 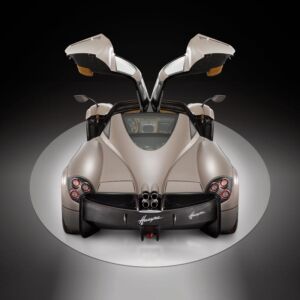 A Pagani is able to present drivers with state of the art solutions while still drawing on the rich history that precedes it. The ever present emphasis is on a living breathing being rather than a digital one. This can be seen in everything from the leather latches to the toggle switches, but this ethos finds its purest expression in the mechanical aluminum gearlever assembly, a monument to the art of the manual gearshift; progress that does not deny the past. The aluminum dashboard takes inspiration from the most complex swiss watch designs and includes a central Multi-Function Display displaying performance relevant information when SPORT mode is engaged and a trip computer when the COMFORT mode is activated.

The aluminum center console is machined from one solid block of aluminum and features a clarinet style array of mechanical switches controlling the HVAC system. The high definition central touchscreen is the heart of the vehicle infotainment system, controlling audio functions, satellite navigation, secondary vehicle functions and Bluetooth phone.

To this date five prototypes have been built which have been conducting road tests for the past 4 years. Currently, over half a million kilometers have been covered by our prototypes and
before entering the US market we will have reached one million test kilometers. Each prototype has been assigned to a specific development task. At Mercedes-AMG one is used to develop drivability, and another is used for emission development. One car is operated constantly by Bosch Engineering for the application of ABS and advanced stability and performance enhancement systems. Still another vehicle is used for gearbox testing, and general vehicle dynamics development.

The car complies to the strictest European and American standards in term of safety and pollution regulations. Several studies were conducted to determine the most frequent types of crashes involving high performance cars. The results of these studies have let us to develop specific safety measures not required by law but to guarantee an enhanced protection for the occupants. Several cars have been used to perform these tests.

* changing according to the model

Lateral acceleration should generate about 1.5g on street tyres

Rumours state the price tag could be around $1.4 million

<< Back to first page about the Pagani Huayra