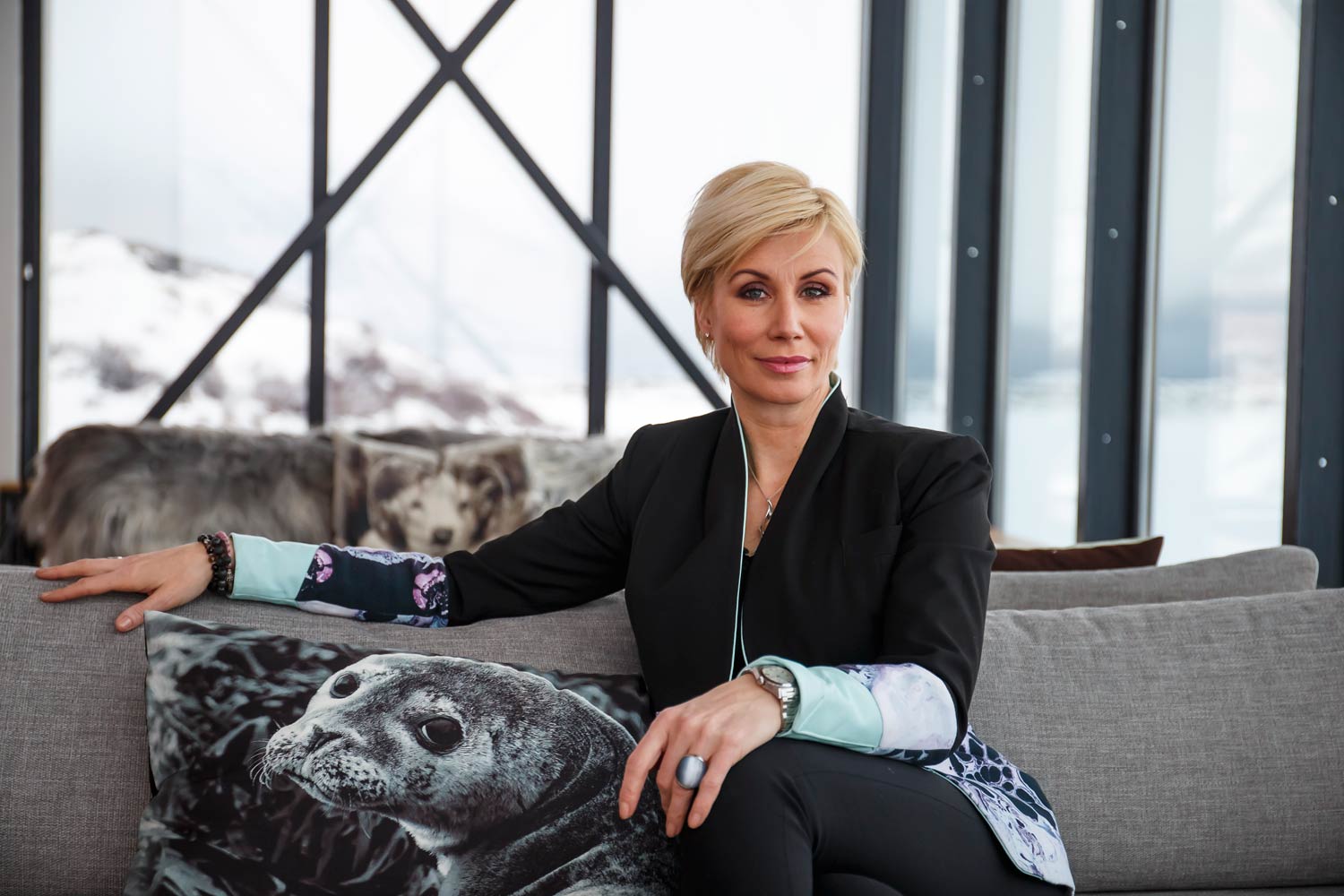 In the first part of this two-part interview, Sabi Phagura talks with the owner of Iceland’s ION Luxury Adventure Hotel, Sigurlaug Sverrisdóttir

Less than an hour’s drive from the hustle and bustle of Reykjavík, and set against a backdrop of majestic mountainous lava fields, ION Luxury Adventure Hotel is an experience you won’t forget. From here, you are more likely to see the Northern Lights, be able to embark on a challenging trek across an ancient glacier, or enjoy a day of fly-fishing in plentiful icy rivers. Sabi Phagura spoke to owner and designer Sigurlaug Sverrisdóttir, the brainchild behind this magnificent treasure. 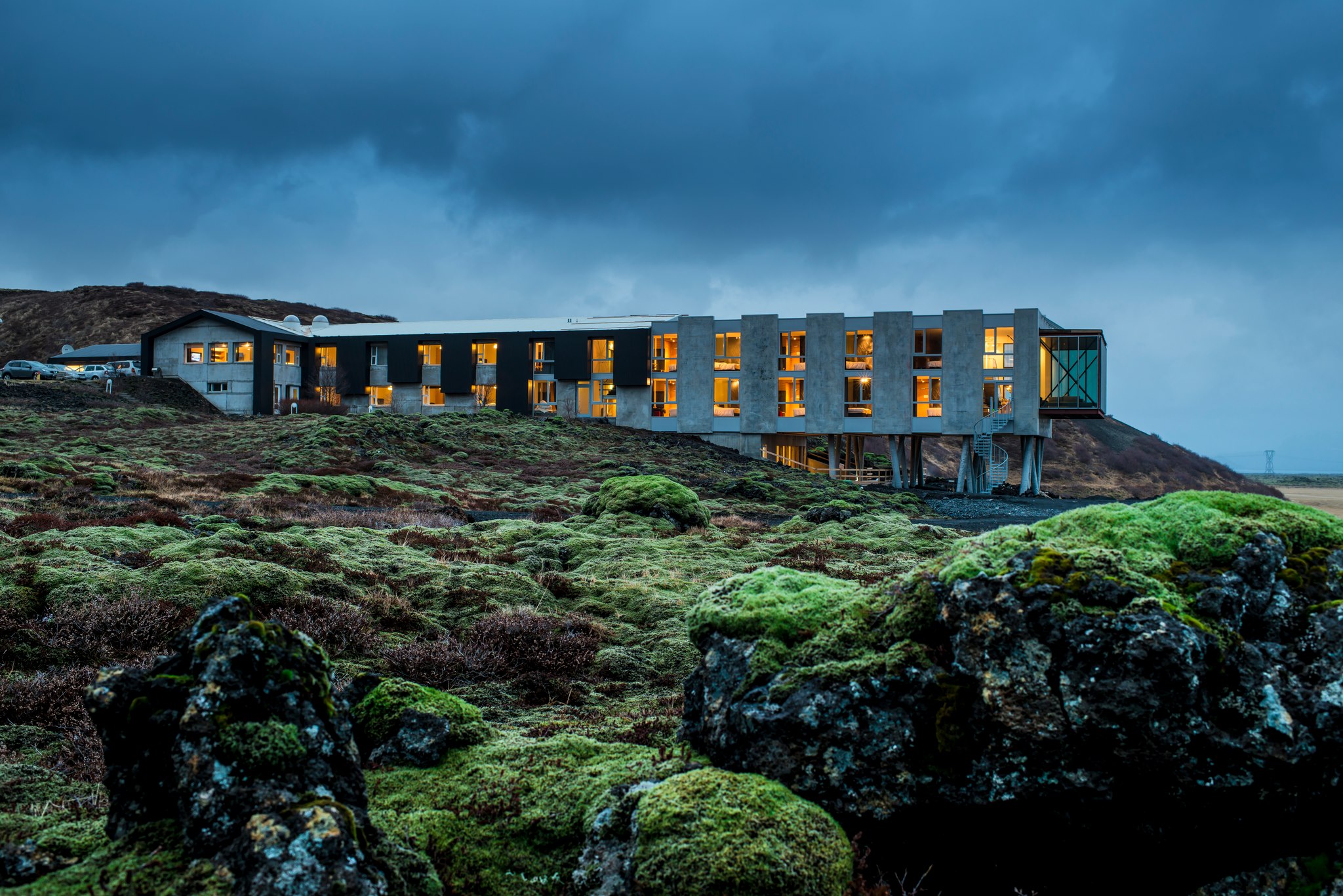 LM: What lead you to create a boutique hotel concept?
SS: When we lived in Switzerland, we were constantly looking out for a summer-house in this area, as it’s one of the greatest spots in Iceland, next to Thingvellir National Park. Properties rarely come on sale there as they tend to stay in families for generations. Then we noticed that a former staff building of a geothermal power plant was up for auction. We immediately recognised the business opportunity for a hotel as there were none in this area. There used to be one within Thingvellir National Park, but it burned down in 2009.

We purchased the building in 2011 when Iceland had recently been put on the map due to the Eyjafjallajokull ash cloud. The financial crisis had caused a major slow down period in investments and construction, and therefore we believed this was the right time to start preparing for increased tourism in Iceland.

LM: How did you get the vision to create such a unique hotel?
SS: We immediately decided to extend the building and renovate the older part; we wanted to reach a total of 45 rooms. Initial plans were to own the building and rent out the business. However, the more I discussed the concept and ideas with one of my oldest school friends, Erla from Minarc Architects, the more we saw the opportunity for something really exciting.

The Minarc couple, namely Tryggvi Thorsteinsson and Erla Dögg Ingjaldsdóttir, are highly talented with using space and specialise in sustainable materials. Therefore, they were the perfect choice for us. Before we knew it, we had added some 1100sqm including the Northern Lights Bar and Lava Spa with a 10m outdoor natural hot spring pool.

The building itself was fairly complex and therefore costly, due to the combination of materials used, as well as the architectural/engineering challenge. The building is on a lava field in a water protected area, where there are as little as 8 metres to boiling water in the ground. The area is where the North American and Eurasian tectonic plates are drifting apart, and therefore we were required to take into account a seven times greater building strength than in Reykjavík.

It soon became evident that we would be completely involved in the whole project, so we moved back to Iceland to take on the challenge of building and creating this masterpiece.

LM: How involved in the design of the hotel were you? 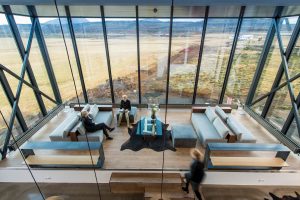 SS: Very! I project managed the whole thing from start to finish. I had never built a house before, let alone a hotel so it was a major learning curve. The architects were in LA and I was there at the site, every day, liaising between architects, carpenters, designers and builders in order to get it all finished in time and make it just so. Some of the builders even joked that I was like Mrs Thatcher as I wouldn’t let them leave until the job was done close to the end. Such as with many hotel projects, we were running behind the original schedule and we needed to complete in time for soft opening as we already had bookings from February 2013. We were almost full for the first month when we opened.

I used several Icelandic designers, photographers, artists, stylists as everything had to be authentic, organic and Icelandic. Everything from the pictograms, wooden info books, signs, uniforms, music, body products, furniture and art is made by local professionals using local materials. I knew from the beginning that we wanted to embrace everything Icelandic in every possible way, using fair trade, organic products and our business method. Everything had to be local and organic with a strong link to nature as it is something that I am passionate about, and I am very aware that this is the main reason for people to visit Iceland.

For example, our ‘do not disturb’ signs are made by an Icelandic designer and they say ‘let sleeping ducks lie’ which is a nod to the iconic bird of Thingvellir, the Great Northern Diver.

LM: You have won 12 awards since launching the hotel in 2013, including two at The Boutique Hotel Awards this month (Most sustainable hotel in Europe and Best Honeymoon hotel in Europe). What do you think is the main reason for this?
SS: I think this has a lot to do with authenticity, the interesting story we have to tell and the strong belief in our product – we put a great deal into this project both emotionally and financially. As I had never launched a hotel before, I ensured that I hired talented people to assist in making it work.

LM: How would you define the style of the hotel? 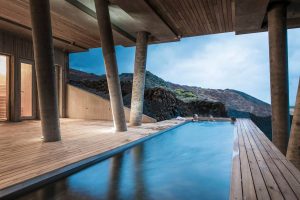 SS: Scandinavian minimalism with a strong link to modern Icelandic design and nature.

LM: How do you ensure that you appeal to a wide age group?
SS: The strong ties to nature ensure that all ages enjoy staying with us. Whilst we are a design hotel, we pride ourselves on being down to earth. We use a lot of lava, moss and sheep fur in our design and decorations. We put pride into linking out clients with the most exciting adventure tours as well as offering a gourmet restaurant and live music every now and then.

LM: What is it about this part of Iceland that you love the most?
SS: Definitely the landscape and nature. Even though I was born here, I’m still fascinated about the lava, moss landscape around ION. I still feel amazed when I see the Northern Lights dancing in the sky on one of my late returns from work. Even though you have experienced it several times before, it is different when you are outside of the city. It´s much more intense.

I also thrive from the energy; I find immense power in the Icelandic nature. Hence the reason we chose ION for the hotel´s name.

This respect for Mother Nature is in our blood; our parents and grandparents certainly knew not to mess with her. One month before I was born, in January 1973, there was an eruption on The Westman Island, a small island south of Iceland. Overnight almost the entire island was covered in lava. The rescue to move the islanders to the mainland was successful mainly due to the fact that all of the fishing boats were in harbour as the seas were too rough for the locals to fish. The first boat left with inhabitants to reach the mainland only 30 minutes after the volcano erupted.