What is it?
The Infiniti Q70 is a saloon from the luxury arm of Nissan, a model that was formerly known as the ‘M’. Recently facelifted, it is awash with sumptuous curves, and is a welcomed break from the more familiar lines of the offerings from German competitors.

At just under five metres in length, this is a large executive car with a profound road presence and a decent-sized 450-litre boot. The front is dominated by Infiniti’s signature grill and central emblem, which is flanked by swooping LED headlamps. The rear has been designed with wrap-around lights (also LED) which are joined by twin chrome exhaust tailpipes, and a red “S” grade exterior badge. The nicely-sculpted 20-inch five double-spoke alloy wheels complete the elegant look.

Under the bonnet lies a 2.2-litre 168 bhp (170PS) four-cylinder diesel engine which has been sourced from Mercedes, and can be found across the Infiniti Q70 line-up. It recently replaced the larger outgoing 3.0-litre V6 diesel, although a more powerful 3.7-litre V6 petrol unit can still be specified for the Sport Tech trim if desired.

What’s on the inside? 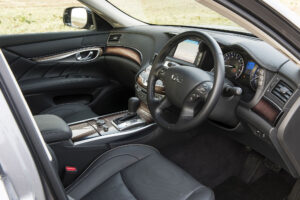 The interior is spacious, and very smart in appearance. The plush black leather seating is extremely comfortable and supportive, and the 10-way electronically adjustable seats come with a memory function so that those in the front always have their perfect pre-set position. The piano black lacquer trim, which lines the bulging and very accessible centre console and door handle surrounds, gives the cabin a touch of sophistication. The multi-function leather-clad and heated steering wheel offers easy finger access to the magnesium paddle shifts for those who wish to define their own gear ratios, away from those supplied by the seven-speed automatic transmission. 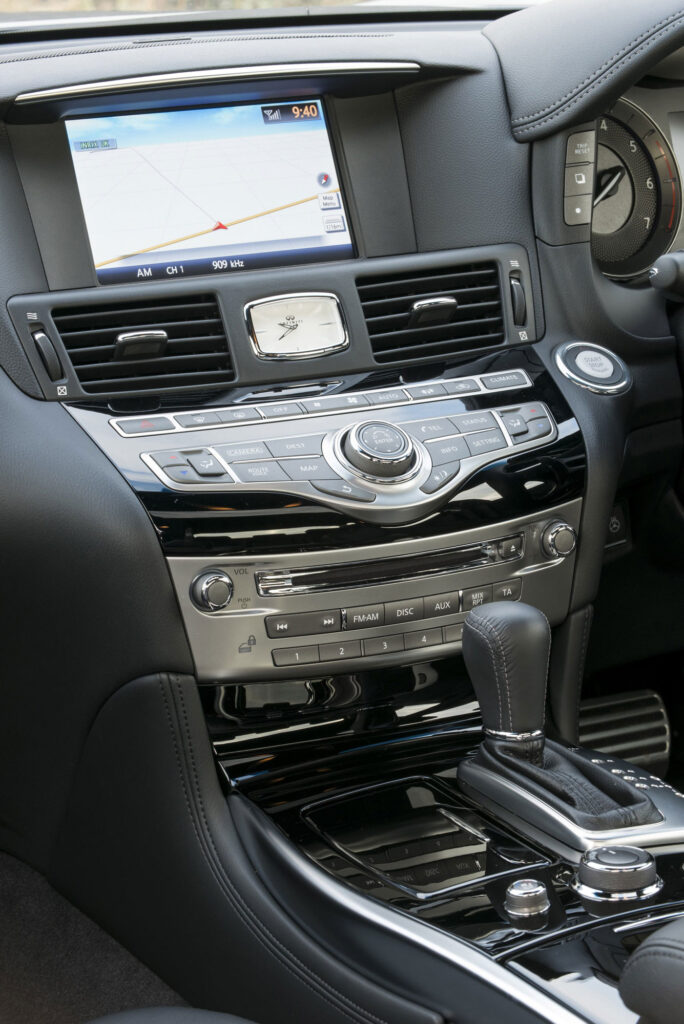 There is also plenty of in-car technology to hand. The built-in touchscreen satellite navigation system is simple enough to use in conjunction with the centre dial, and gives you plenty of warning of upcoming speed cameras, but is not overly advanced in appearance. The screen doubles up as a very effective rear view parking monitor (split between an overhead and direct rear view) which comes courtesy of the wide angled camera mounted above the number plate. There is also the touchscreen-operated dual zone adaptive climate control with auto-recirculation (this includes vents in the back), whilst the Forest Air® system keeps the air clean in the cabin thanks to an outside odour and exhaust gas detecting sensor. Acoustic entertainment from the radio, CD or an external audio device is supplied courtesy of the BOSE® Premium Surround Sound System. The 16 speakers, which are certainly very effective, provide great all-round acoustics, no matter where you are sat.

Buyers also have the added peace of mind that the Infiniti Q70 is packed with a plethora of safety systems to protect its occupants. This includes the Lane Departure Warning (which operates above 45mph) to prevent the driver drifting into another lane (it won’t physically pull you back in line), and Blind Spot Warning, where a small orange light illuminates next to the wing mirrors when a passing car is in the ‘detection zone’. This is in addition to everything else that you would expect from a car of this calibre such as four-wheel ABS and traction control. 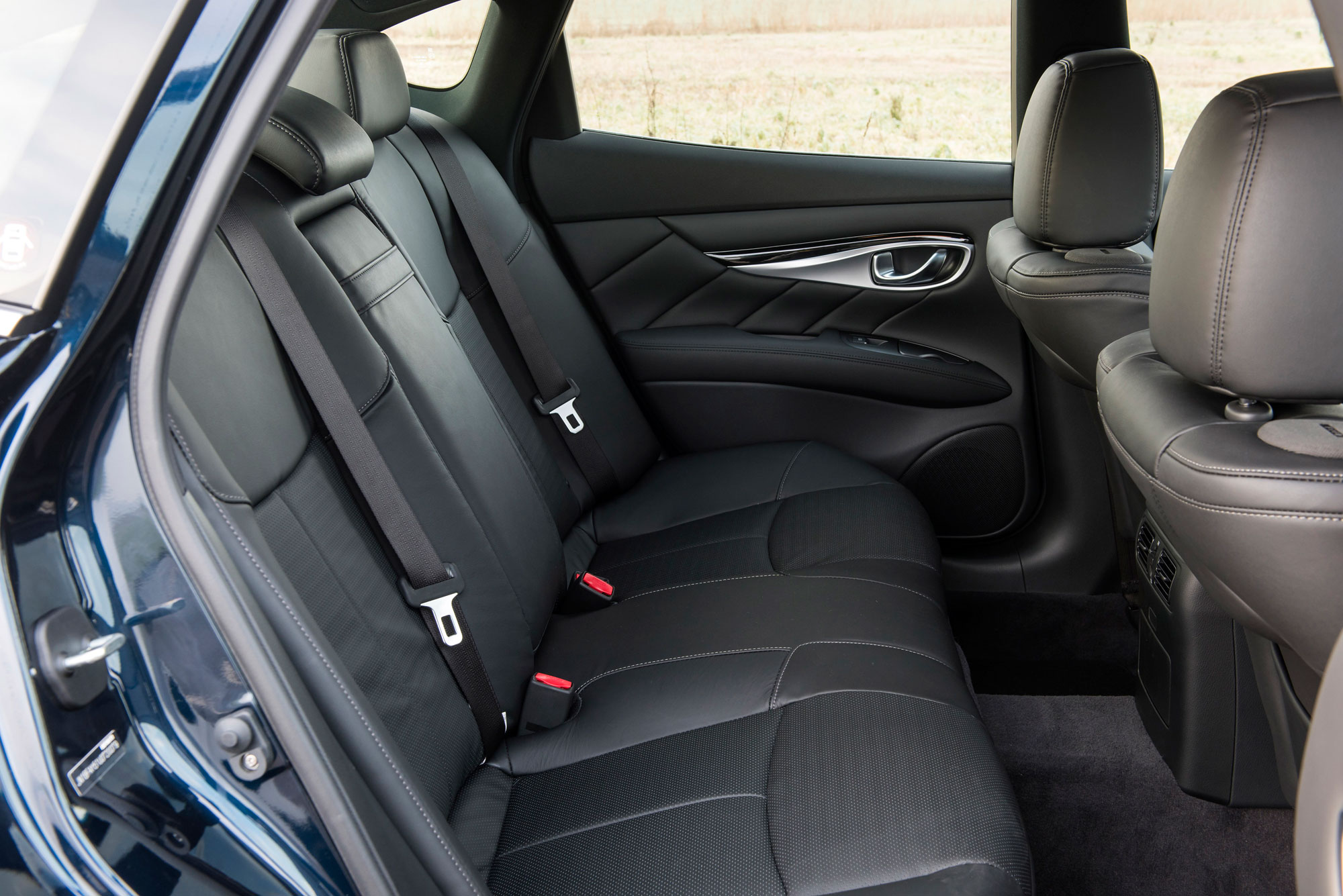 Our test model came with the option of the easy-to-operate sunroof, which we had the pleasure of using during a rare August heatwave.

What’s it like to drive?
The ride of the Infiniti Q70 is refined, and you can definitely feel the executive aura that is given off by this car. Occupants are nicely shielded from bumps in the road surface, which makes it a comfortable place to be on a long journey. The combined MPG is quoted at 57.6, which is the sort of statistic that you would expect from a diesel. We achieved an average of around 47 on our 250-mile round trip from London to Norfolk, which combined motorways, a series of A-roads and the odd residential street – this figure is perfectly satisfactory.

62 mph is reached from a standing start in just under nine seconds, and the car can achieve a top speed of 137mph when the opportunity allows. When you pull away from traffic lights or a roundabout, there is plenty of power on tap. However, out on the open stretches, road noise is noticeable, but is not so intrusive that it is a significant disturbance, or indeed compromises the enjoyment of being in the Infiniti Q70. The only other very minor gripe is that the engine is slow to decelerate which means that you have to be on the brakes more than you would like on occasions, rather than letting the car naturally lose speed.

If not turned off, Stop / Start is activated automatically when stationary. However, when the engine fires back into life, the display tells you exactly how many Kg of CO2 has been saved after sitting at lights or in traffic, an added bonus for those who like to be the modern eco-warrior.

Our conclusion…
With Infinitis still few and far between on UK roads, the Q70 is certainly a head-turner, provoking a certain element of curiosity. It undoubtedly continues to face stiff competition from rivals, but as a genuinely good alternative to a saloon from the more established brands in a similar price bracket, this would certainly be my pick.