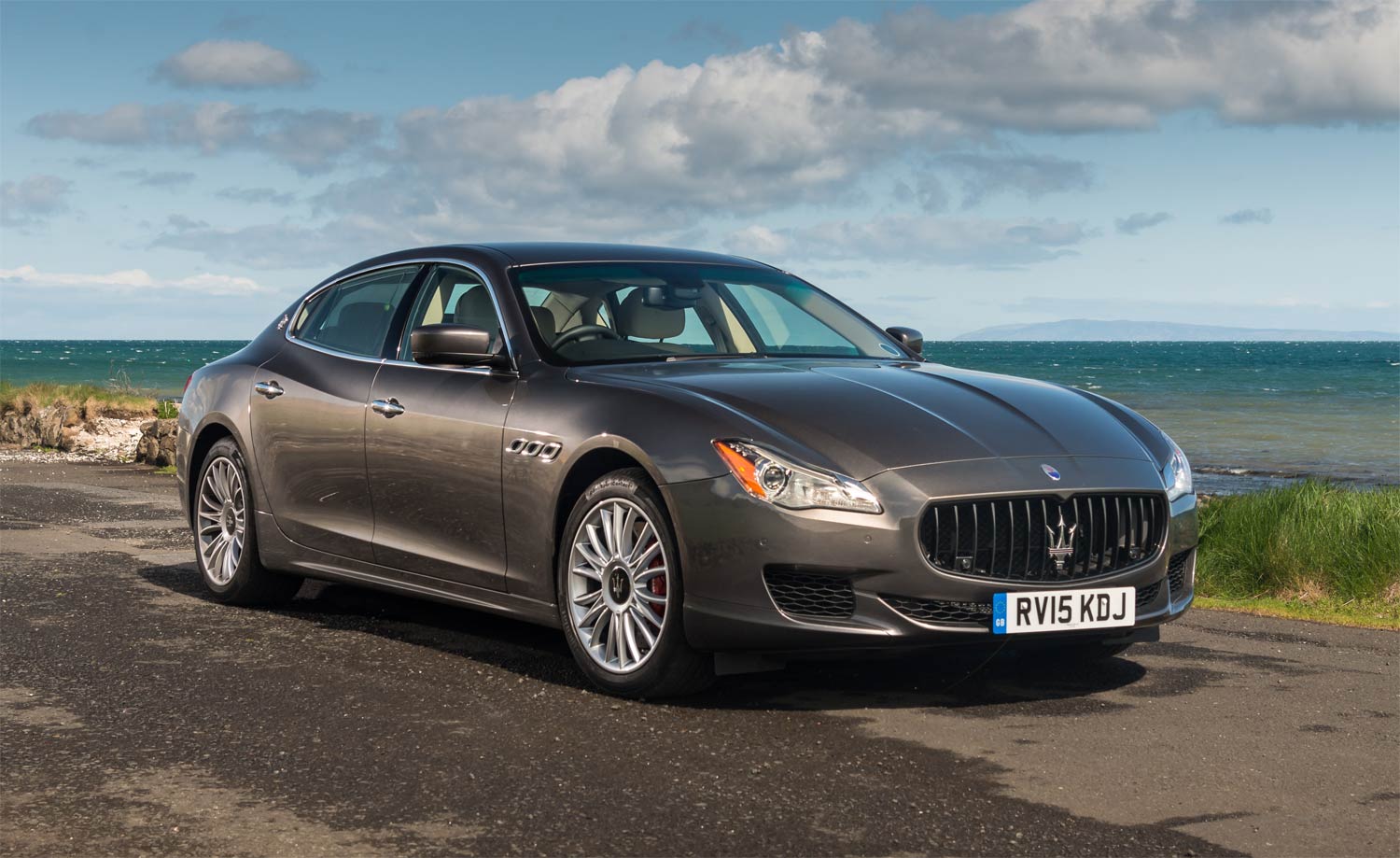 Simon Wittenberg puts the Quattroporte GTS – the fastest four-door Maserati in history through its paces on the Causeway Coastal Route in Northern Ireland.

After celebrating its 100 year anniversary in 2014, exciting times lie ahead for Maserati, thanks to the pending arrival of the Levante SUV and the Alfieri sportscar. The Quattroporte has actually been a part of the automaker’s line-up since 1963, a car whose name literally translates from Italian as “four doors”. 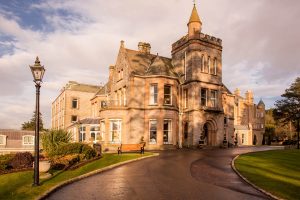 The saloon has since evolved over the last five decades into the beautiful masterpiece that it is today. Sales of the Quattroporte reached nearly 10,000 cars in 2014, and the total global Maserati volume is expected to rise to 75,000 units by 2018, from 36,000 last year.

The current range counts the 275 hp ‘Diesel’ and 410 hp ‘S’, and culminates with the Quattroporte GTS variant which we were given to test drive (there is no hybrid). The GTS is propelled by a twin-turbo 3.8-litre V8 pushing out 530 hp, meaning that it has the potential to catapult the car to an impressive top speed of 190 mph (307 km/h). It’s also worth noting that this is the one of the most powerful engines ever to sit in a Maserati road car, a powerplant built by Ferrari at Maranello, and shared with the California.

At just over five metres in length, the Quattroporte GTS has a large and dominant persona with appealing lines, and is undoubtedly a head-turner. It quickly became an attraction in its own right when parked at some of Northern Ireland’s most prized areas of natural beauty. The striking front of the sixth-generation Quattroporte is characterised by the signature oval grille sporting the marque’s trident logo (inspired by the Fountain of Neptune in Bologna’s Piazza Maggiore). The headlights wrap around the sides of the sweeping bonnet to leave an elegant first impression. 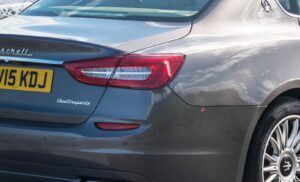 The rear sees the introduction of almost triangular-shaped full LED lamps, and is adorned with the GTS badge to leave nobody mistaken about the powerhouse that lies beneath. The sports exhaust system’s twin double polished steel pipes are finished with trapezoidal tips. Our test car was fitted with 19-inch Tritone alloy wheels (a factory option) with 245/45 front tyres and 275/40 rear tyres, designed for reduced fuel consumption and road noise.

The plush leather-clad interior is extremely spacious with plenty of leg and headroom, and is a haven of comfort both for front and rear passengers. The chrome detailing is also impressive, spanning from the central clock to the instrument binnacles which sit under a wave-like profile. The three-way electronically-adjustable seats and steering column make for the perfect driving position. When the ignition is switched off, both slide back and up respectively to make getting in and out of the car effortless. 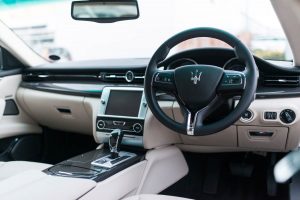 At the heart of the centre console is the 8.4-inch touchscreen Maserati Touch Control (MTC) display, and it’s a mighty clever interface. This is where the heated seats are activated, it’s the controller for the in-car acoustic entertainment, the Garmin-powered satellite navigation, the on-board computer, as well as acting as the display for the reversing camera mounted above the rear numberplate. It’s highly intuitive and very simple to switch from one function to the other on demand.

The Quattroporte GTS audio experience comes courtesy of the 15-speaker Bowers & Wilkins premium surround sound system when specified as an option. When listening to different genres of music, the well-balanced configuration gives the impression that you are sitting in a concert hall enjoying a live performance, such is the quality. 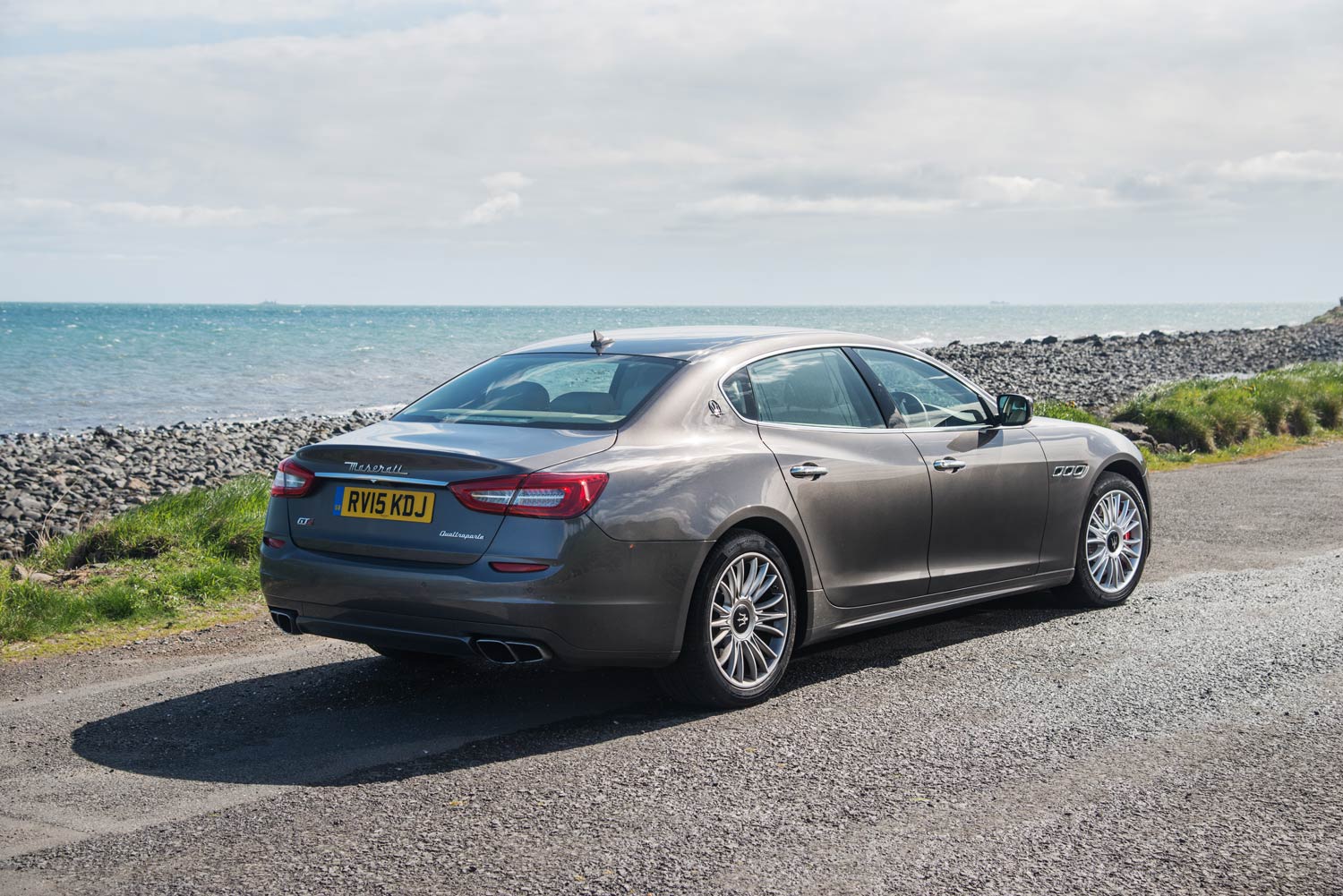 So what’s the Maserati Quattroporte GTS like to drive?

Once you are comfortably seated in the cabin, the car doesn’t feel as big as it is, and is far from intimidating. 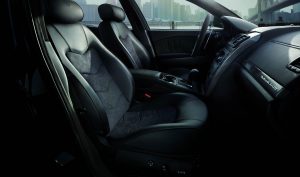 Setting off from the luxury confines of the Palace Suite at the Culloden Estate and Spa just outside the city of Belfast, you can’t help but notice how smooth the ride is, thanks to the double wishbone suspension. Road noise is un-intrusive which leaves occupants to enjoy the addictive exhaust note, particularly the deep growl when in Sport mode that sees the bypass valves permanently open.

Out on the open roads, the Quattroporte GTS is remarkably quick (as you would expect), and 62 mph is reached in just 4.7 seconds – not bad for a car that weighs in at just shy of two tonnes. Sitting at around 1,500 to 2,000 revs, it makes an excellent cruiser with plenty of horses on tap when needed. There is excellent stopping power to match courtesy of the Brembo braking system which brings stylistic callipers.

As you climb up and down the rev range, the eight-speed ZF automatic gearbox delivers precise changes and exceptional performance, and the transmission can also be controlled manually by using the steering wheel mounted paddles at any time. This brings up a small graphic on the dashboard to indicate the current gear when doing everything by hand. Alternatively, there is M mode where the automatic gear lever can be used to go up and down the ratios. 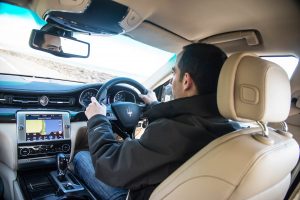 Steering is precise, making it very easy to guide the Quattroporte GTS around smaller villages where streets narrow, or through sharp bends. The combined fuel economy figure is quoted at 23.9 mpg, and we managed an average of 20.9 over 240 miles which saw different speeds and road types in urban and rural settings.

The Maserati Quattroporte GTS is a car where true luxury meets exquisite engineering. This is a model that should definitely not be overlooked when looking to buy a sports saloon in the £100,000 bracket. It’s a genuinely good package which ticks a lot of important boxes, including power, finesse and exquisite Italian flair to name but a few. Prices start from £108,185 OTR (excluding options and tax).

With thanks to the Culloden Estate and Spa (www.hastingshotels.com/culloden-estate-and-spa) and The Bushmills Inn (www.bushmillsinn.com).

See more of the Maserati Quattroporte GTS and the Culloden Estate and Spa below: