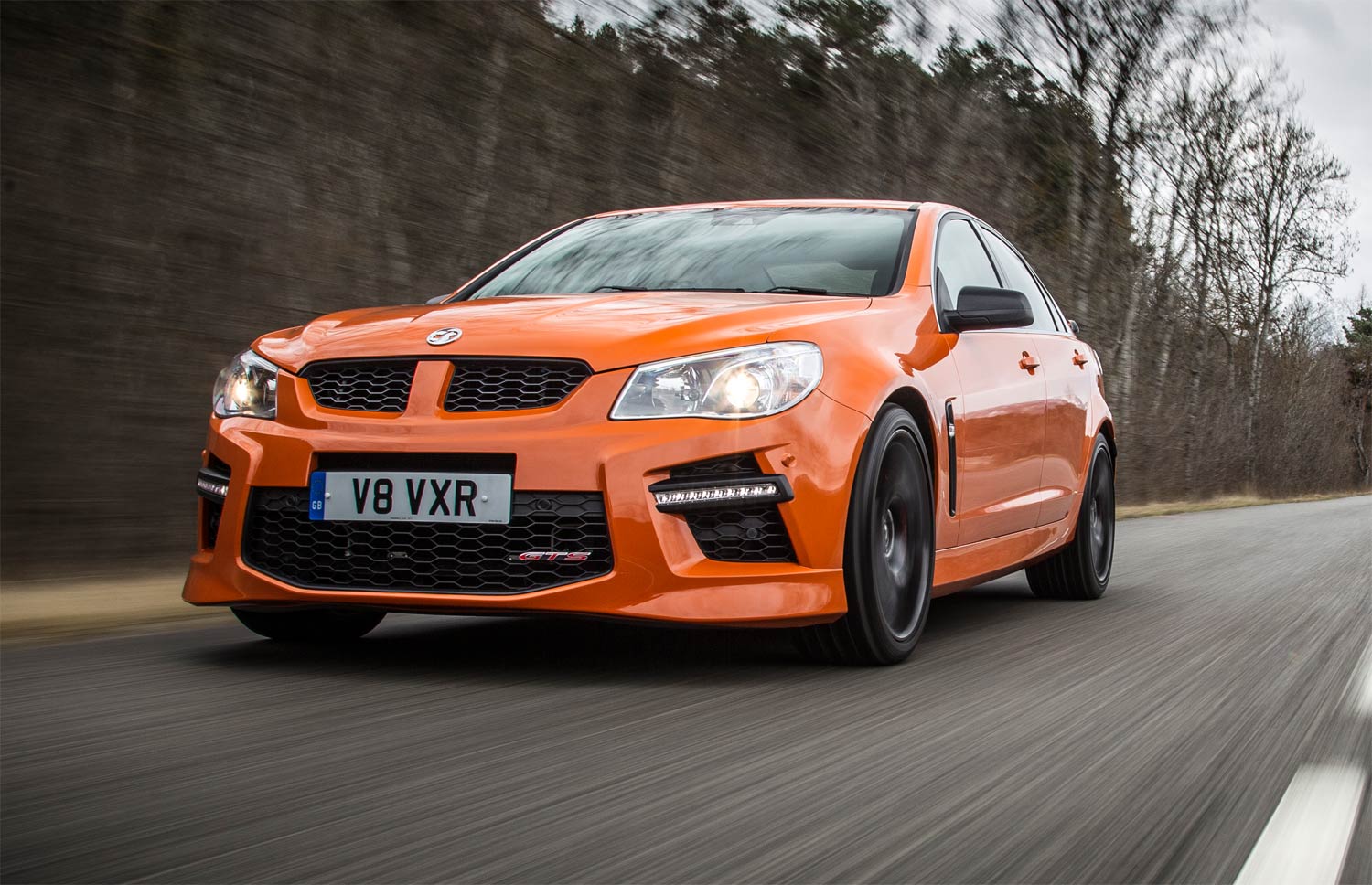 Guest contributor and motoring journalist, Nick Hall, gets behind the wheel of the 576bhp VXR8 GTS super saloon

There is a delicious moment, as I flatten the right pedal and 576bhp of pure fury yanks at the horizon with wrecking ball levels of finesse and physical strength, that I completely forget I’m driving a Vauxhall at all. 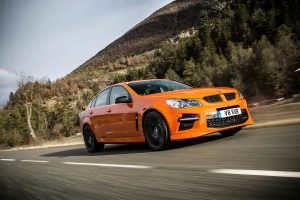 The super saloon blows through 60mph in 4.2s, tears down the road like a rabid Rottweiler and jumps off ruts in the tarmac as the supercharged 6.3-litre V8 shakes the birds from the trees. It’s sensory overload, in fact it’s borderline intimidating. But to drive one is to develop some kind of irrational childlike lust that just won’t go away.

Primal desire isn’t really Vauxhall’s thing. The Luton marque makes sensible, dependable cars for sensible people. It has history, of course, with the legendary Lotus Carlton, but this is another level. In fact, it only really makes any level of sense when you learn that Vauxhall’s M5 and E63 AMG basher isn’t really a Vauxhall.

It’s a Holden Commodore, the best-selling car in Australia since, well, ever. That’s part of the GM empire, but the pie eating, beer swilling Australian branch. Holden makes sensible cars, too, but the HSV division creates monsters. Vauxhall simply put a new face on the HSV GTS to create the VXR8 GTS. If you look closely you can still see tell-tale badges in the light cluster and the dashboard.

If it sounds lazy, it really isn’t. Chevrolet adopted a similar approach and raided the Holden parts bin for the renaissance of the iconic Camaro SS. And that is perhaps the greatest clue to the car’s personality. It’s an old-school muscle car. It’s American brawn brought to Britain though Australia, all 576bhp of it and as it costs £54,499 it undercuts the M5 and E63 AMG by £20,000.

The end result is a visually arresting thing, especially in the garish shade of orange that threatens to burn a hole in the corner of the Vauxhall carpark as I arrive. It’s sharp and beefy, in that inimitable steroid way that can only come from turning a standard base car into something so ridiculous and finishing with audacious bulges, slashes, massive vents and inappropriate wings. If cars had tattoos, this one would come with a spider’s web and a teardrop on its face. 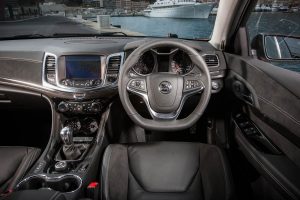 Inside it’s a similar story: a perfectly functional, mid-range saloon jazzed up with aggressive badges, carbon-fibre effect trim and figure-hugging sports seats. When you push the start button, the looks cease to matter.

The whole car rocks with a flex of the right foot, really, the whole car rolls from side to side like an executive lowrider. The sheer venom is ridiculous, and that’s before it’s turned one of those 20” wheels in anger.

Unlike the competition, the VXR8 GTS comes with a good old-fashioned six-speed gearbox. You can order the automatic, but that would be like ordering low fat, well, anything. This is a meat and potatoes, blue collar supercar. It just wouldn’t feel right without the hefty shove on the left pedal and the ratchety, mechanical gearbox. For the first few miles, it doesn’t feel right anyway.

Joining the M1 heading North and immediately find myself doing triple digits. I’m not even trying, the car’s not trying, it’s just so damned fast. I fall into step with traffic and my foot rests on the throttle, you don’t really need any with this big lazy engine rumbling in the distance. The torque almost matches the horsepower, which means you really don’t have to wind the engine up, it just goes. With the ContiSportContacts struggling for grip all the way through the first four gears when I really give it some then I struggle to believe the quoted figures. It’s faster.

The in-gear acceleration is, frankly, ludicrous. The noise, a guttural, primal roar from the LS3 engine that is as American as apple pie and has powered generations of Corvettes and Camaros, with the hiss of a supercharger in the background, is as violent as you’ll find on a car anywhere. At low revs it’s a lazy, rumbling volcano. Press the throttle and it simply erupts. 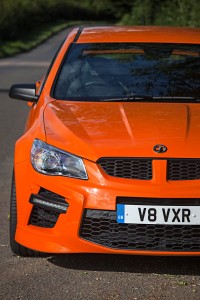 I only bury the throttle to the carpet once. It’s spectacular, intense, frightening and inhibiting. In the space of a few seconds I’m a proper criminal and in love with this laugh out loud car, but in the real world you’d never use most of the power.

You don’t need to, because unlike some of its more accomplished German alternatives the Vauxhall is fun at any speed. Away from the motorway and on to the fine B-roads around Silverstone, the VXR8 GTS comes alive and the wheel fidgets and flexes as as the Vauxhall bounds up the road with the clumsy enthusiasm you can’t help but love.

The suspension comes with four settings, but I find myself drawn to the firmest setting and the sheer drama. Hunkered down the secondary damping can’t quite cope with a bad road surface, the car doesn’t quite regain its composure in time for the next bump. Soften it up and it can, but it’s less fun.

As for the steering, a weak point in many modern cars, it’s just spot on. The VXR8 GTS offers weighty, meaty steering that does not feel over assisted and gives utter confidence in what’s happening at the front wheels. It turns in well, too, hiding its substantial 1881kg kerb weight with aplomb. It comes with sophisticated independent wishbones all round, none of that leaf spring nonsense here, and with that surfeit of power it will kick the tail out on demand if you turn the electronics off. Just be sure you’re ready for that.

It comes with torque vectoring, which the likes of engineering champion Porsche lauds on its new models, so this is not an unsophisticated car. But it feels almost agricultural, in a good way.

It’s not a fingertip car and I find myself driving from the shoulder, forcing it into the apex rather than guiding it, but that’s just the character of the car. And that’s what it has, character, in abundance. 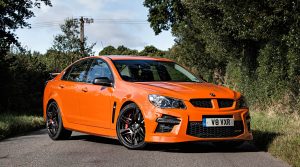 The Vauxhall’s flaws define the experience as much as that almighty, near nuclear powerplant and make it a real left-field choice. It’s harsh to compare it to the more complete and quicker M5 and E63 AMG, or even Jaguar’s XFR, it’s way cheaper than any of them and has a wholly different ethos. In fact the real competition hasn’t arrived yet, but it’s coming.

Ford has finally given the Mustang to the world and, in that context, the GTS suddenly makes a lot more sense. Because this is a muscle car, an old-school sports saloon with more power than it could ever need, charm in abundance and real value for money. The Mustang will ignite Britain’s interest in this most American institution and that could be good news for the left-field Australian alternative.

It’s not for everyone, in fact the VXR8 GTS is as niche as it gets and sells in such small numbers that it makes the M5 look like it is given away with a driving licence. But that in itself will be enough reason for some flamboyant souls to buy them.

They will love every single minute behind the wheel of this insane pony car that just does not feel like a Vauxhall at all.

VXR8 GTS Specification at a glance: