When you think of high-end watches, Switzerland is usually the first place that pops into your head, however over the past twenty years more and more countries have produced horological stars that have been creating fine time pieces, more than capable of holding their own within the competitive realm of high-end watch-making. The United States, Britain, Germany and France are just 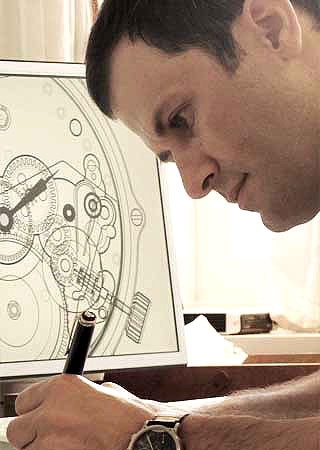 a few of the countries turning out excellent quality watches, and within the Middle-Eastern region the undoubted star has to be Israeli watch maker and designer Itay Noy.

Itay Noy is one of the rare breed of designers that doesn’t just consider the aesthetics of the watch, any watch maker that can describe his creations as things with a beat, rhythm, and heart really shows their true passion for horology. Even as a young child, Itay Noy loved watches. He received his first watch from John Edelnand, his grandmother’s only cousin, who lived in England and often visited the family home. Over the years John continued bringing Itay special watches, and it didn’t take long for the young lad to become a staunch devotee of timepieces.

Being a masterful time piece creator does not automatically qualify Itay as a master of time! Itay is a man who wears so many hats that finding time for himself is becoming increasingly difficult. Aside from designing and creating fine time pieces from Studio Itay Noy, he is also a lecturer at the Bezalel Academy of Art & Design teaching Jewelry and Fashion, and runs short courses and workshops on time pieces and art at other design schools and colleges. The success of Itay’s specialist lectures resulted in him being invited to the US to teach graduates about jewelry design and watch-making in 2008.

Itay is also no stranger to winning awards having amassed many over the past ten years. More recently he collected the 2011 Ministry of Culture Design Prize for Product Design, further confirmation of his excellent design principles used in the range of high-end watches produced from his Tel Aviv studio. We caught up with Itay while he was busily preparing the 2012 Itay Noy collection and took the opportunity to find out what this talented designer and watch maker had done since we last spoke.

Luxurious Magazine: It’s been almost a year since we last chatted, what have you been doing during this time?
Itay Noy: I’ve been in my studio, busily working every day making timepieces to order for my customers all around the world. Besides that I’ve been researching and designing the 2012 collection and preparing myself for new exhibitions. Last month I won the ‘2011 Design Prize’ by the Israeli ministry of culture and I will exhibit my timepieces in a ‘Petach Tikva’ Museum, Israel. 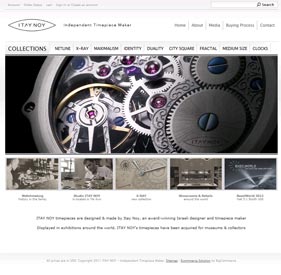 LM: We see that the Itay Noy website has been completely redesigned, what prompted you to do this?
IN: The old website was designed 6 years ago so I wanted to make a totally new website which reflected the Itay Noy brand today. The new website is rich with content about the studio and the collections. You can read more details, see more pictures, videos and the to view 360⁰ around each watches.

LM: You are known for your exquisite limited edition watches, we didn’t know that you also had a range of table clocks, tell us more about these
IT: I made the 3 table clocks in 2000 as part of my graduate project at the Bezalel Academy of art & design Jerusalem. (The table clocks acquired for the Tel Aviv Museum of art collection, the C. Bronfman collection and Gallery YAW Michigan collection).

Later on I have decided I should remake a small limited edition of those clocks for collectors. I also make conceptual timepieces for museum exhibitions (grandfather clocks, virtual clocks and videos about time etc.) 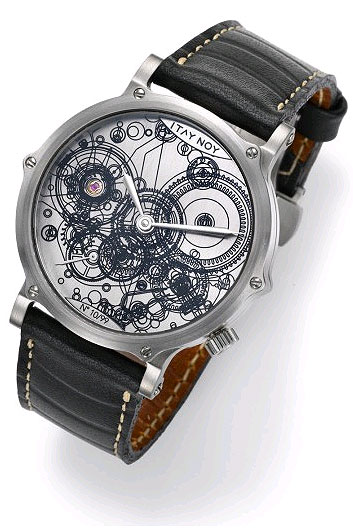 LM: What are your thoughts on using precious metals or jewels for the watch cases and is there a possibility of seeing a Very Limited Edition Itay Noy collection in solid Gold or Platinum in the future?
IN:  My background is in Jewelry and I’m not rejecting a possibility to create timepieces from precious metals, for the moment I’m using diamonds in few models. In general I believe that the conceptual idea of the watch, the design and it’s execution is more important than the value of the metal.

LM: Aside from your own wonderful creations, which other watch brands, both independent and mainstream would you consider yourself to be a fan of?
IT: I really appreciate and admire Breguet timepieces, especially the early original timepieces of the creator himself.

Every year I take my student to the Museum for Islamic art in Jerusalem to see the Sir David Salomon’s Collection of Watches & Clocks. There are dozens of Breguet pieces and the highlights and his most important pieces – the ‘Marie Antoinette’ 1783-1820.

After that the list is long for beautiful watches in the market…but I’d like to see more watches that shows intellectual design on top of time functions.

LM: Which watch are you currently wearing?
IT: I wear the new X-Ray6498 (see right) – it’s my favorites for the moment

LM: In nearly every picture we see of you, you’re hard at work! What do you like to do when you get a chance to relax and unwind?
IT: Yes, I do work hard because I have many roles at the studio…although I love my work. When I do get the chance to relax I like to spend time with my family, to travel and to do sports.

LM: What will Itay Noy be doing over the next six months?
IT: The most important thing it to complete my new 2012 collection and to be ready on time before Basel World.

LM: Itay, once again thank you for taking the time out to talk to us and we’re sure we will see you again at next years at Basel World!